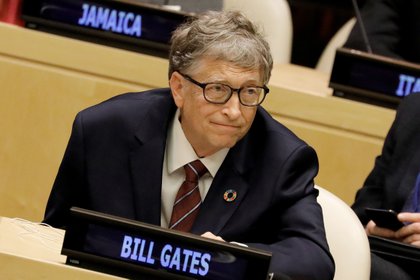 In the image a record of the founder of Microsoft, Bill Gates. . / Peter Foley / Archive

Montevideo, Feb 18 . .- The president of the National Meat Institute (INAC) of Uruguay, Fernando Mattos, expressed this Thursday his desire to invite businessman and philanthropist Bill Gates to visit the South American country after his recent statements against him. sector as a decisive factor for climate change.
In a statement released this Thursday, the Uruguayan agronomist rejected Gates’s words “as reckless and unfounded” and criticized that the Microsoft founder could “point to livestock as the cause of such effects” when, precisely, the sector reviews ” the low emissions calculations. “
Gates indicated in recent days that meat production is the cause of “a climate disaster that causes global warming and will kill more people than the pandemic,” which is why he promotes the consumption of 100% synthetic meat.
In his writing, Mattos compared the intellectual and digital piracy against which “numerous law firms” hired by Gates are fighting with the promotion of “products of laboratory companies that imitate meat and in which he is a shareholder.”
“Call it what you want, but it’s not meat!” Added the INAC official, who described it as “deliberate deception of the consumer” to qualify as meat “a product that should not be called that way.”
Mattos acknowledged in his statement the concern of the sector for “the sustainability of the productive processes in livestock” and concluded with the invitation to Gates “to know Uruguay, a country with more than 400 years of livestock exploitation based on natural pastures and that is example of sustainability “.
“It is not possible to accuse a generalizing sector, without respecting tens of thousands of producers who from generation to generation have received and transmitted a lifestyle, based on the legacy of caring for the natural resource that nature gave us and that we must pass on in the best way, “he asserted.
The statements of the American businessman were replicated and highly contested from various sectors of public life in Uruguay, a country where meat is a fundamental part not only of its gastronomy but of its entire culture, with the ritual of roasting as the core of daily celebrations.
Beef is one of Uruguay’s main export products, mainly to China, the United States and Israel, although the covid-19 pandemic has affected sales. However, it was the main export product in the first month of 2021, with revenues of $ 130 million. .
cmm / scr / cav