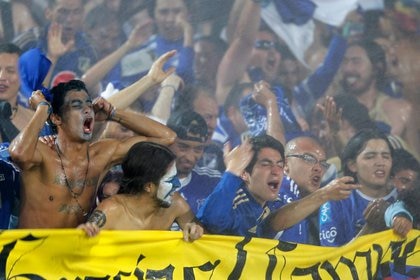 Millonarios did not have a good 2020, in a month, the Bogota team was eliminated from all the competitions in which it was, Liga Betplay, Copa BetPlay and Copa Sudamericana. The last two since the penalty shoot-out. Despite the fact that his season finale, in terms of football, was not bad, this is not enough for the fans. require titles.

Through a statement, signed on behalf of the ‘Blue fans’, they expressed their discomfort with Gustavo Serpa, maximum shareholder and representative of the Amber Capital group, owner of the club, and with Enrique Camacho, president of Millonarios. The letter alleges that after the team had been eliminated from the competitions, none had “given the face“So that the fans know that he is coming to the club.

The letter dated November 20, also criticizes that in the midst of the suspension of the championship by COVID-19, Gustavo Serpa spoke repeatedly about handling within the Dimayor and criticized the so-called ‘small clubs‘, and now he has “forgotten” about the Millionaires fans.

The recent act that generated the most outrage in the followers of Millonarios, according to the letter, are the statements by Enrique Camacho to the Argentine portal Double Yellow. There he referred to the interest of the Colombian Football Federation in Migue Ángel Russo and the internal problems in the Colombian team. The statement from the fans of the ‘ambassador’ team described this as “a slap to those of us who follow and suffer for Millionaires (…) who speak about something that does not concern them and not about our doubts and concerns, only shows disinterest and contempt for what Millionaires means to their fans”.

The letter ends by asking those already named, that, if they are not in the capacity to support their players, the coaching staff and answer any questions to the fans, “resign.” In addition, they name the goalkeeper Cristian Bonilla who recently rescinded his contract and of whom the signing fans assure “hates millionaires”. 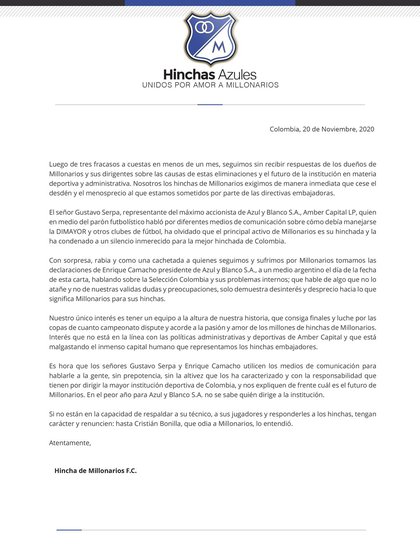 The Millionaires fans demand answers from their managers after being eliminated in all tournaments.

This letter was widely shared on social media by fans under the #SerpaYCamachoPonganLaCara, which was trend number 1 on Twitter. Millonarios will play the ‘eliminated league’ for the rest of the year. Competition that will give the opportunity to the clubs that did not classify among the eight best in the tournament, from fight for a place in the Copa Sudamericana.

Dates, times and how to watch the matches: this is how the BetPlay League quarterfinals will be played in Colombia

Jhon Duque, the millionaire figure who will be a new player for Atlético San Luis de México

The Minister of Housing, Jonathan Malagón, will deliver the first two houses today, as a pilot test, so that the islanders can begin rebuilding the island after the passage of Hurricane Iota.

The Minister of Housing, Jonathan Malagón, will deliver the first two houses today, as a pilot test, so that the islanders can begin rebuilding the island after the passage of Hurricane Iota.