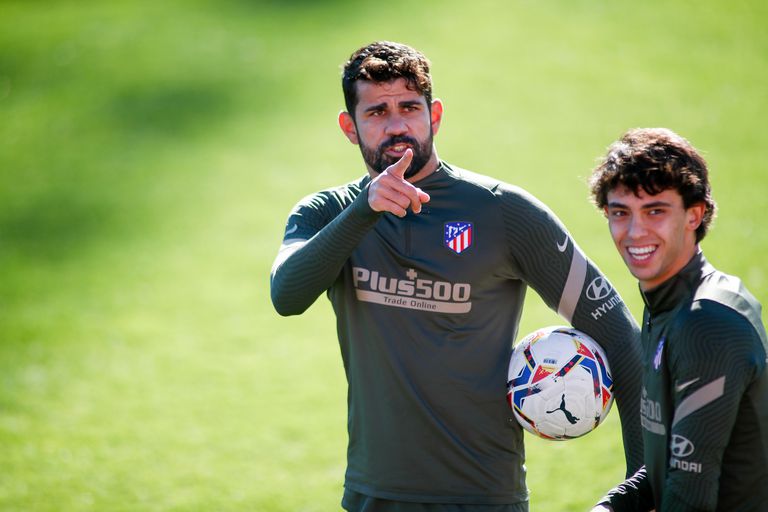 Diego Costa and João Félix during Atlético’s last training session prior to the game with Barcelona this Saturday in Madrid..7 via Europa Press / Europa Press

The vagaries of football are unfathomable and at times cruel. The pandemic has deprived Atlético fans of enjoying live the game that their team has been playing this first part of the season. With few scratches – the first half of Huesca (1-1) and the home game with Villarreal (0-0) -, the change of fur has generated widespread enthusiasm. Even the win in Munich (4-0) was read as excessive and analyzed under the courage of Simeone. The story of the transformation of the group and the coach is so obvious from the numbers as from what they transmit to achieve what so far are the best records of the era of the Argentine coach.

Barcelona will face this Saturday at the Wanda Metropolitano (21.00, Movistar LaLiga) against a team that averages 2.43 goals in favor, that concedes 0.29 and that finishes 13.71 times per game. Not even in the 13-14 season, that of the league title, had Atlético reached those numbers. The change, which was already seen in the post-confinement, except for the setback at Leipzig, has been accentuated this season. The percentages of possession (55%) and the number of passes completed (470) in this League are also significant compared to those of the champion team that needed less possession of the ball (49%) and passes per match (310). The comparison reflects two ways of interpreting the game and of winning. The difference between the two roads is that the current one still needs to be endorsed with titles.

The players propagate that they have taken a step forward to what they previously urged the coach. And this one admits it. “I play what the players transmit to me”, he has proclaimed several times already, although with the addition that the arrival of Luis Suárez has been decisive for what Cholo calls “evolution”. The absence of the Uruguayan striker, affected by the covid-19, like Torreira, can lead to an alignment without pure strikers. It would not be a novelty in this campaign. In Pamplona (1-3), due to the losses of Suárez himself and Diego Costa, Correa and João Félix played in the lead. The other option has to do with the recovery of Costa, one of the champions before the coach of the change towards a more ambitious proposal that invades the opposite field. “It’s here to play,” Simeone announced this Friday. Only the history of injuries of the Hispanic-Brazilian can stop Simeone from aligning him from the beginning after a month inactive and in such a demanding duel.

Cholo has admitted the turn taken by the team, but no one examines it more than him. The results and the football deployed have consolidated this new version of the rojiblancos. Simeone kept it, despite the defeat conceded in Munich. In other times, he would have ordered a return to the trenches until he had detected an improvement. For now, the coach trusts his players to continue on the same line. The rehearsals before the duel with Barcelona speak of an alignment with Koke and Saúl in the middle due to the loss of Herrera, Llorente on the right and Carrasco on the left. With the resource of Kondogbia at hand in case there was a change of criteria.

It is not the first time that there is an intention to take a step forward. For Simeone, this journey contains the challenge of establishing himself in Spanish football as a coach capable of achieving success with two opposing formulas. In Argentina, especially with River Plate that became champions, they also mixed in attack a good bunch of talented players.

In each of the last preseason, at Atlético variants proposed towards reconversion were rehearsed. In this, for the moment, the step forward has curdled. The team has developed both its classic 4-4-2 and a 4-3-2-1 or that 4-3-3 that had been tried so much in Los Angeles de San Rafael to later be parked.

This Atleti comes from times that have become hard internally and externally. In recent seasons there was the feeling that the coach and players could have done more. In the worst moments, the boredom for the game was in crescendo and came to generate whistles and criticism of Simeone and Koke, the two great rojiblancos symbols of today. “For tactics and for understanding the needs of the team first and then what he can give it is very important. It has grown a lot since the quarantine. It has a more dynamic pace and pace, which is reproduced first on the computer and then on the selection. I understand that Koke, at some point not so positive soccer player, is basic tactically. Now that he is accompanied by the intensity, the dynamic game and the moment he is in, he can develop everything he has ”, says Simeone about the good moment the captain is going through.

The metamorphosis has put most offensive players on the wave. João Félix, the player who has awakened the most enthusiasm since the return of Fernando Torres, has uncorked a decisive start to the season. Correa, Carrasco, Llorente, Costa himself before injuring himself, Herrera, Vitolo and even Lemar at times, are the great beneficiaries of this happier Atlético. And everything indicates that it will continue like this. As long as Simeone does not detect that his players do not convey enough confidence to him.