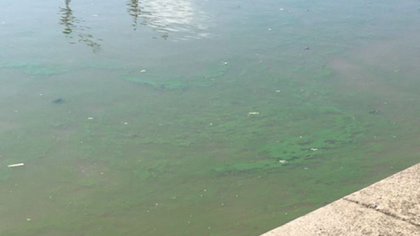 In recent days, social networks were full of images and videos showing the waters of Puerto Madero dyed an almost fluorescent green with bluish tones, a phenomenon that had already occurred on November 28, 2012 and is due to the presence from cyanobacteria of the genus microcystis, very dangerous for the human being in case of being ingested.

In this framework, the Ministry of Environment and Sustainable Development, in charge of Juan Cabandié, held on Monday the first meeting of the commission to provide an inter-institutional approach to the proliferation of these bacteria in the Río de La Plata, and some measures have already been defined in this regard.

“This call was promoted by the Ministry of the Environment of the Nation because we understand that we have to be at the height of the circumstances regarding this situation,” said the Secretary of Environmental Control and Monitoring, Sergio Federovisky, according to an official statement.

The official said that for the national State this problem is “an ethical responsibility in environmental matters” that “forces it to act immediately”, for which he assured that it will “approach the parties to be able to gather the opinions of experts and experts ”.

Throughout the meeting, held virtually, the state of affairs was addressed, as well as the measures to be deployed to control and monitor the excessive presence of cyanobacteria in the Río de la Plata, revealed from the area of ​​the Delta del Tigre, province of Buenos Aires, to the dikes of Puerto Madero in the Autonomous City of Buenos Aires.

Among the actions planned by the commission, it was agreed the development of a mechanism for the early detection of bacterial blooms in raw waters and an action protocol.

On the other hand, the group decided to accompany the work of the water treatment plants and their control bodies in the identification of capacities and limitations against the appearance of this type of bacteria in water in order to provide quick solutions in the affected areas.

The meeting was led by Federovisky, together with authorities and technicians from that portfolio, as well as specialists from the Ministry of Health national, of Argentine Water and Sanitation (AySA) and National Council for Scientific and Technical Research (CONICET).

The appearance of these blue-green tint bacteria is related to the pressure of organic nutrients – mainly phosphorus and nitrogen – combined with downspouts and high temperatures, added the Environment statement.

It should be noted that the droughts and downspouts produced in various water courses that occurred this year, together with the amount of sewage, industrial waste, fertilizers and pesticides dumped, which raise pollution levels, as well as the accelerated pace of climate change that in its evolution produces environmental, social, economic and health impacts on a regional and global level, result in an exaggerated proliferation of cyanobacteria, which feed on the organic matter present, the official information abounded.

The commission, which will be coordinated by Federovisky, was formed as follows: on the part of the Environment portfolio, the national director of Water Management and Aquatic Ecosystems will participate, Gabriela González Trilla; the Director of Inspections, Alexander Mackielo; Mariana tognetti, in charge of the Directorate of Environmental Quality and Recomposition; and the advisor to the Secretariat for Environmental Control and Monitoring, Candela Nassi.

On the part of the Ministry of Health of the Nation, the coordinator of Environmental Health, Marina Orman, next to Pablo Ivaldi Y Ana Parenti of the same coordination. On behalf of AYSA, the Director of Technical and Development, Alejandro Barrio and the Water Quality Manager, Veronica Beanie. Finally, the main researcher of CONICET, Ines O’Farrel.

San Luis: they will plant fish in lakes and lagoons in order to reduce the population of mosquitoes transmitting dengue

Esquel: a 19-year-old girl with hantavirus was in intensive care