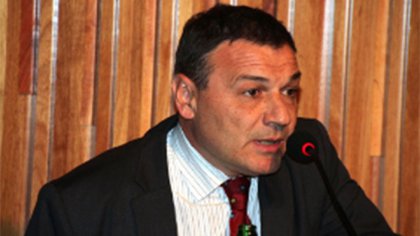 The Government proposed as a candidate to be director of the Agency for Access to Public Information (AAIP) to Gustavo Fuertes, a trusted lawyer of the Chief of Staff, Santiago Cafiero, who is currently legal advisor “expert in Public Policies” of the Secretariat of Administrative Coordination of that portfolio, who does not have a record on Access to Information, according to the curriculum published in the Official Gazette. However, “at the discretion of this authority, he has sufficient suitability for the performance of the aforementioned position”, as read in Resolution 100/2021 signed by Cafiero. The text highlights that Fuertes “is not involved in the incompatibilities” provided for in the Law on Access to Public Information (No. 27,275), “nor has he served in the course of the previous five years in elective or partisan positions” .

From the Chief of Cabinet they relativized these criticisms before the consultation of .: “The doubts and questions that may arise about his candidacy will be answered institutionally in the appointment process and in the face of the requirements that are made,” they said.

The formalization of the appointment of Strong must first go through a process that implies, after the publication of their antecedents today, the opening of an instance in which the candidate can receive observations that can be sent from 23 of this month. Later, Fuertes must go through a public hearing set for March 23 at 9 in the morning and which will be held virtually, in which you will have 20 minutes to present on “the relevance of your designation, your curricular background, your proposed work plan and a brief response to the comments received.” Registration to participate in the hearing will also open next Tuesday. Nevertheless, This instance is not binding, and the Executive can advance in his appointment in the seven subsequent days, regardless of the questions that the candidate may have., or choose to withdraw your proposal and start the process again with another name. 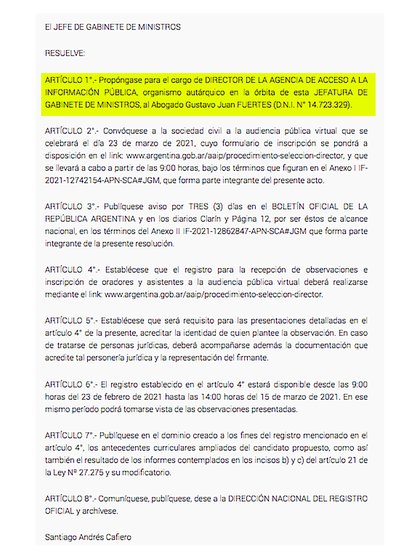 Gustavo Fuertes’ proposal as a candidate to lead the Agency, published in the Official Gazette

59 years old and a native of the city of La Plata, this Lawyer and notary public became the Executive’s candidate to occupy the place left by Eduardo Bertoni on January 1st., when his resignation became effective after more than three years at the helm of the Agency. As Bertoni himself publicly reported at the end of the year, he did so to become an alternate representative of the Regional Office of the Inter-American Institute of Human Rights (IIHR) for South America, based in Montevideo. The former official had a mandate until August 2022, since the position is for five years and had been appointed in 2017 by then-President Mauricio Macri. He had previously been Special Rapporteur for Freedom of Expression of the Inter-American Commission on Human Rights (IACHR) and director of the Center for Studies on Freedom of Expression and Access to Information (CELE) at the University of Palermo.

According to the Fuertes curriculum released today by the Government, before occupying the position of legal advisor in the Chief of Cabinet, Between 2018 and 2019, he was administrative legal advisor to the Undersecretariat of Environmental Planning and Sustainable Development in the Province of Buenos Aires, a position from which “he assisted in the coordination of the 2030 Agenda for the implementation of the Sustainable Development Goals (SDG) in the Province of Buenos Aires”, according to the CV published in the Official Gazette.

His other antecedents in the Buenos Aires public administration are not linked to Access to Public Information, but mainly to the area of ​​Commerce. 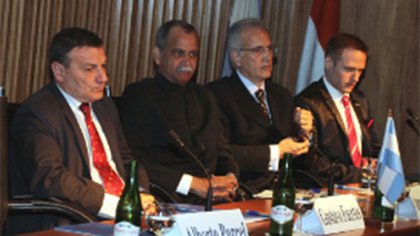 Gustavo Fuertes in a business seminar with India, organized by the Argentine Chamber of Commerce, in December 2014

Between January 2012 and December 2017, Fuertes served as Provincial Director of Commerce of the Ministry of Production of the Province. From that position, “he coordinated the implementation of national programs in the area of ​​the Province of Buenos Aires” such as “Prices Care, Now 12, ProCreAuto and HOG.AR, among others,” as detailed in the Resolution with its antecedents. Previously, since In 2004, he had been Director of Commercial Policy and later advisor in the Provincial Directorate of Commerce of that Buenos Aires portfolio.

Between 1997 and 2002 he was a lawyer for the Instituto de Desarrollo Empresarial Bonaerense (IDEB), an autarchic entity of the Ministry of Production, with a step in 1994 as administrative legal advisor in the provincial Ministry of Health and, previously, for the Municipality of Berazategui, as Head of the Social Legal Department, dependent on the Secretary of Social Welfare.

According to the final income and expenditure report of the 2015 election campaign for president, Fuertes was a contributor to the formula of the Front for Victory, made up of Daniel Scioli and Carlos Zannini. He donated $ 25,000 at that time, in cash. 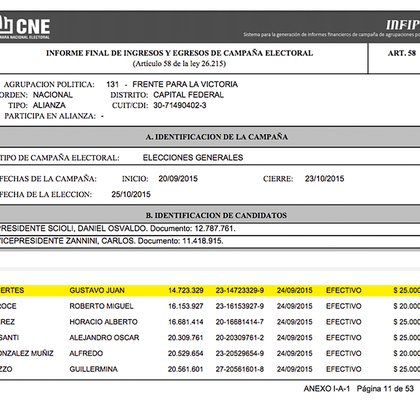 Excerpt from the Report of contributions of the presidential campaign of the Front for Victory of 2015, which includes the donation of Fuertes to the Scioli-Zannini formula

The national deputy Karina Banfi (UCR), one of the promoters of the Access Law, questioned the name chosen to be the head of the AAIP and sowed doubts about its future independence. “Fuertes is unknown on the subject, he has no other credentials than to be a lawyer in the Chief of Cabinet, with a direct relationship with an area from which it should be independent. It should not be forgotten that even though the Agency is under the orbit of Chief of Staff, it has autonomy and autarky. So much so that no resolution of the Agency under the management of Bertoni was signed by the Chief of Staff, neither by Cafiero, nor before Marcos Peña. This should stay that way ”.

Created from the enactment of Law 27,275 in September 2016 as an autonomous and autarkic body that functions within the orbit of the Chief of Cabinet, the AAIP’s function is to guarantee the right of access to public information, promote transparency measures active and the protection of personal data. What The guarantor body of Access to Information, must ensure compliance with the norm in the orbit of the Executive Power, therefore Its independence from the government of the day is key, since it must identify the organizations that do not comply with the law, and if they do not, it must encourage them to comply with it.

“By the methodology for choosing the director of the Agency provided by law, the value is placed on the suitability, and in its knowledge in the subjects of Access to Public Information and Protection of Personal Data. The lack of knowledge in this area can undoubtedly affect citizen control over these rights.. A person in that position who does not have this experience in terms of the construction of an autonomous right such as access to public information in the framework of human rights, will believe that it is only an administrative issue, “Banfi warned in dialogue with ..

“There is a host of candidates with greater antecedents and the renown of Eduardo Bertoni who could replace him,” lamented the deputy. 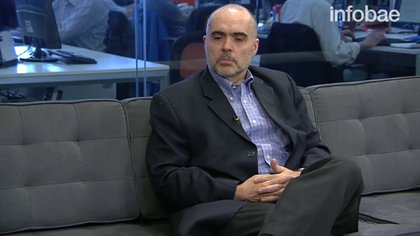 Eduardo Bertoni, the former director of the Access to Public Information Agency, who resigned as of January 1, 2020, when he still had more than a year and a half left in office

Since Citizen Power, also made public their questioning of the possible appointment of Forts from the Chief of Cabinet. “At first, the candidate does not show any experience in the matter. The Access to Information law stipulates that the candidate must present information that proves suitability for the exercise of the function“Citizen Power alerted today shortly after the proposed name was known.

“The Access to Information law was an achievement of civil society after more than 15 years of work. The rights acquired with it are essential to guarantee the transparency of government acts and the control of public resources. As a society we have to insist that a person without knowledge of the issues involved in Access to Public Information is not appointed to such a critical position. Transparency in public affairs depends on it“Said the Argentine chapter of Transparency International, the leading organization in the fight against corruption worldwide.

On February 3, Poder Ciudadano, along with ACIJ, the Legislative Directorate, Infociudana and CIPPEC complained about the lack of control that the Agency had since Bertoni’s resignation at the beginning of the year. “It is necessary that the authorities of this power of the State initiate as soon as possible the process of appointing its owner, in a transparent and participatory manner, proposing a suitable person who demonstrates a solid track record in the matter, provides guarantees of impartiality and can account for a clear commitment to protect the right of access to information public. In turn, the increasingly widespread use of the request for access to information tool and the necessary updating of the information that public institutions must publish permanently demand that their authority show proactivity to ensure the principle of maximum disclosure and opening of the information in the hands of the State ”, warned the NGOs in the communiqué they released at that time.

ACIJ added today to the concern about Fuertes’ proposal due to “the lack of relevant background information on the candidate, necessary to demonstrate his connection and commitment to the right of access to public information.” In that sense, Clara Lucarella, a lawyer for the Strengthening of Democracy Program of this organization, told . what “Although he has diverse backgrounds in public administration, he does not have a specialized track record in Access to Information, which may have a negative impact on his suitability”.

Banfi, however, stressed that “due to the human resources and the installed capacity that the Agency already has, it will be more difficult for a person who is very identified with Kirchnerism or the Government to come.”

In the same vein, another expert on Access issues – who requested that his name be reserved – had told . Before the name of Fuertes was known, “to the extent that the Government appoints someone” who has some commitment to the issues of transparency and protection of personal data, the Agency should continue to function well because of the team it has ” . Today, before a new query, he said he did not know him and preferred not to comment.