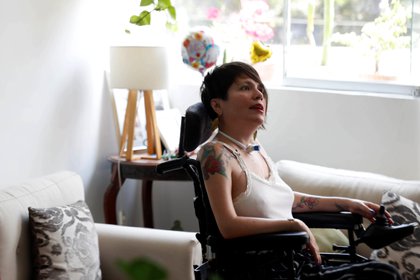 In the image, Ana Estrada, a woman who suffers from polymyositis, a degenerative muscle disease, during an interview with Efe at her home in Lima (Peru). . / Paolo Aguilar / Archive

Lima, Jan 22 . .- The Ministry of Justice of Peru reaffirmed this Friday its position in favor of the legalization of euthanasia despite the fact that its attorney (lawyer) has opposed Ana Estrada’s legal demand to decriminalize death assisted and thus guarantee access to their right to decide when to die.
The director of Human Rights of the Ministry of Justice, Edgardo Rodríguez, assured that “the case of Ana Estrada is a great reference”, since she is the first person in Peru to openly demand the legalization of euthanasia.
However, he regretted that the attorney general’s office of the Ministry of Justice has followed an opposite line of technical and political support for this cause.
“The demand of Ana Estrada has a special character within the framework of human rights,” said Rodríguez during the working table “Right to a dignified death: urgent regulation in Peru”, organized by Congressman Alberto De Belaunde, of the Purple Party.
AN INTERNAL CONFLICT
Despite the clear favorable position of the Minister of Justice, Eduardo Vega, the lawyers of the Ministry of Justice firmly opposed Ana Estrada’s request, as did their counterparts from the Ministry of Health and the Social Health Insurance (EsSalud).
This was stated in the judicial hearing on January 7, when Estrada demanded that the Justice annul the pious homicide, which punishes with up to three years in prison anyone who kills an incurable patient who expressly and consciously requests him to put an end to their intolerable pains.
The lawyers requested that Ana’s demand not be heard under the main argument that euthanasia should be legalized first by Congress.
In that sense, Congressman De Belaunde considered that “the attorney general’s office cannot understand its autonomy in a way that goes against the interests of the rule of law.”
The Peruvian parliamentarian recalled that the same circumstance occurred in the legal litigation that has prevented Óscar Ugarteche from registering in the civil registry his homosexual marriage contracted in Mexico with the Mexican Fidel Aroche, as well as other cases of identity change for transgender people.
In turn, Rodríguez anticipated the support of the Ministry of Justice for the bill presented the day before by the Purple Party to legalize euthanasia, within a reflection from “a high and consensual debate.”
QUESTION OF DIGNITY
Also participating in the colloquium was Ana Estrada herself, a 44-year-old psychologist who for almost 30 years has suffered from polymyositis, a degenerative and incurable disease that weakens her muscles and currently keeps her most of the time in bed and requires mechanical ventilation. .
Ana expressed her joy at the presentation of the recent bill because “this is about dignity and the freedom to choose.”
Estrada appreciated the recent approval of euthanasia in Spain, a country that he recalled that it took almost 30 years after Ramón Sampedro asked for it for the first time, and acknowledged that he is closely following the process in Chile, where in March the Senate must ratify a similar law.
Likewise, Ana Estrada’s lawyer, Josefina Miró Quesada, recalled that “the State has to guarantee the dignity of a person from beginning to end, and Ana’s case is quite simple insofar as she is a person who openly expresses this request “.
MEDICAL COLLEGE WITH RESERVATIONS
In turn, the president of the Ethics Committee of the Medical College of Peru (CMP), Alfredo Celis, clarified that his institution is not in favor of euthanasia but of dignified death through palliative care that alleviates the pain of the patient with an advanced or terminal illness until his biological death.
“We see risk in the decriminalization of euthanasia because it could be easy for a patient with advanced disease to be euthanized, ignoring palliative care,” said Celis.
The Spanish deputy Rosa Medel, from United We Can, also intervened in the debate, who stressed that “if people speak naturally about euthanasia it is due to cases like Ana Estrada that have come to light.”
Likewise, Chilean deputy Vlado Mirosevic, from the Liberal Party, promoter of the euthanasia bill in Chile, indicated that “this fight is precisely for Ana and for so many others who are asking for dignity at the end of her life.”