The presentation of the Galaxy S21 family is still scheduled for January 14, a date that will also mark the beginning of the pre-purchase period, although its international launch will not be completed until the 29th of that same month.

Thanks to a recent leak we had the opportunity to know the specifications of the Galaxy S21 family, but we were left with the doubt of knowing which SoC will be more powerful, If the Snapdragon 875 that will mount the version for China and the United States or the Exynos 2100 SoC, which will be present in the models that will be sold in the rest of the world.

As many of our readers will recall, the versions of the Galaxy S and Galaxy Note equipped with the Snapdragon SoC have been, in most cases, the most powerful, and at times they have also been superior in terms of efficiency and temperatures, a trend that, according to the latest information, could be broken with the arrival of the Galaxy S21 family.

At least in theory, since at the moment we have no official performance tests that support this idea, but a set of leaks that clearly point in that direction.

Samsung’s Exynos 2100 SoC will be manufactured in 5nm process, like the Snapdragon 875, and will adopt the same big.LITTLE structure with three core blocks in the CPU, but will follow a different approach to operating frequencies. Here is a summary of the specifications of each chip so that you can make a direct comparison: 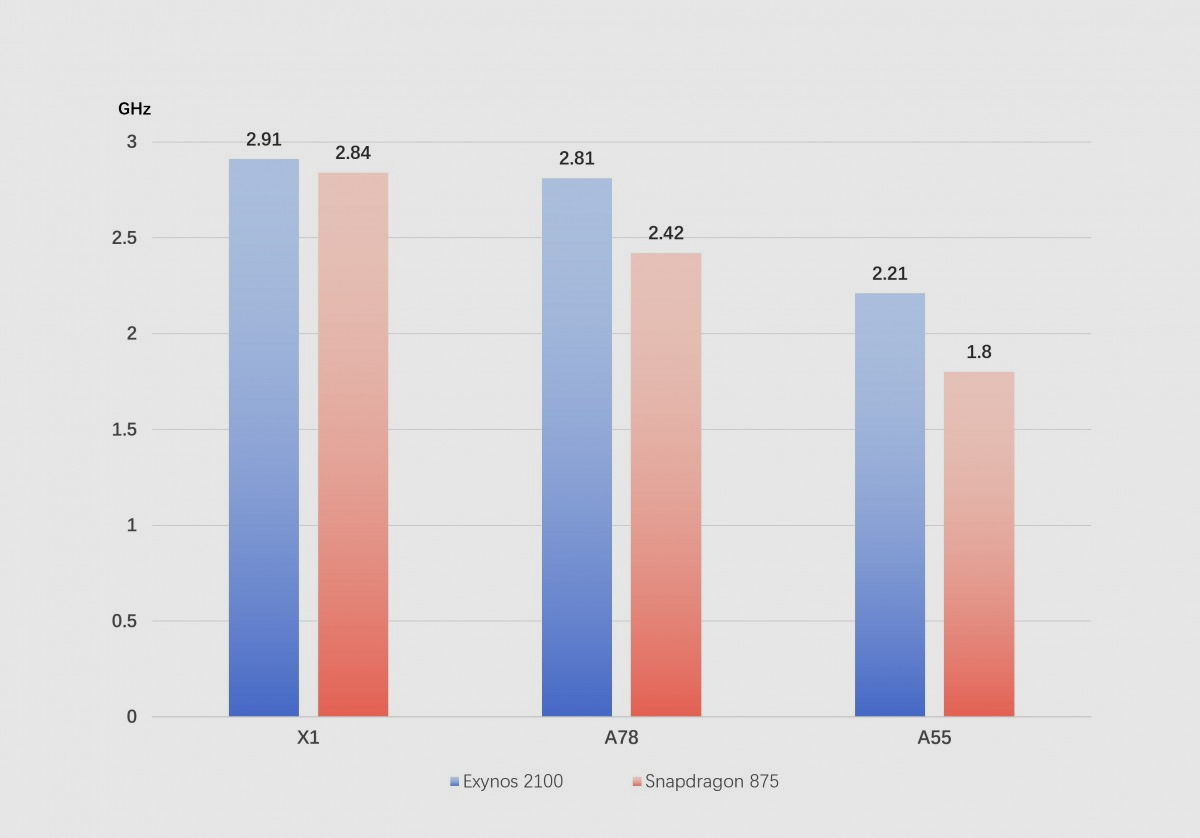 As we can see, the Exynos 2100 SoC has uhigher operating frequencies in all its cores, which means that it will offer greater performance in both single and multi-threaded.

In the most recent benchmarks that have appeared, we have been able to see that the Snapdragon 875 SoC reached the 3,319 points in multithreading (Geekbench). However, several sources claim that Samsung’s Exynos 2100 remains very close to 4,000 points in that same test.

It remains to be seen what performance the new Qualcomm would be able to offer at the GPU level compared to the SoC Snapdragon 875. Normally Samsung uses ARM’s Mali GPUs, and you areor they do well against Qualcomm’s Adreno. It may be that, on that occasion, the reality will change, but frankly, I see it unlikely, in fact I am convinced that the South Korean company will not be able to overwhelm the Adrenos until it completes its AMD collaboration and shapes a Radeon GPU for smartphones.

Regarding consumption and working temperatures, we have nothing clear yet, but we imagine that Samsung will have learned of the mistakes made with the Exynos 990, and that it will not repeat them with the Exynos 2100 SoC in the Galaxy S21.