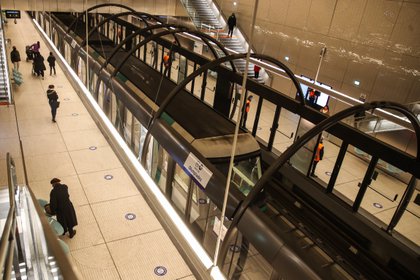 Paris, Jan 23 . .- The French Academy of Medicine advises users of common transport that, in addition to wearing a mask, refrain from calling or talking to avoid infections, and defends the effectiveness of fabric masks despite to which the Executive has advised against its use.
“The use of a mask is mandatory but since we are close to each other, it is recommended not to speak and not phone, because despite the mask there may be projections,” said the head of the Academy’s covid-19 cell of Medicine on the France Info station.
According to the Academy, this measure should be applied due to the difficulty of keeping distances on subways, buses and other means of public transport.
In parallel to this pattern, the Academy, a prestigious institution made up of doctors, pharmacists, biologists and other health scientists founded in 1731 by Louis XV, fueled the controversy over the use of handmade masks, which this week has been discouraged by the Gallic government faced with the expansion of new, more contagious variants.
Following the prescription of the High Council of Public Health and as other countries such as Germany and Austria have already done, the Executive urges the French to abandon artisan masks because they have a lower filtering capacity than surgical ones.
The Minister of Health, Olivier Véran, indicated that in the coming days a decree published in the official bulletin will regulate its use in shops and public spaces.
But the Academy of Medicine assures that, although they are less filtering, it is not advisable to prohibit them since their performance in the defense of new strains of the virus is the same as with the traditional variant.
“The fact that everyone wears masks is much more important than their quality, because what we expect from them is to avoid the projection effect,” added the specialist, who specified that the important thing is that they are used correctly of this sanitary accessory, covering nose and mouth.
The precautionary principle on which the Government is based worries the Academy of Medicine, which fears that this new message will cause confusion in the general public, which was already becoming familiar with the measure, and rekindles doubts about the official recommendations.
“The Government listens to us often but never consults us, we intervene when we believe that what should be done is not being done,” commented the head of the organization, adding in this case to the opinion of the World Health Organization, which defends efficacy of cloth masks.