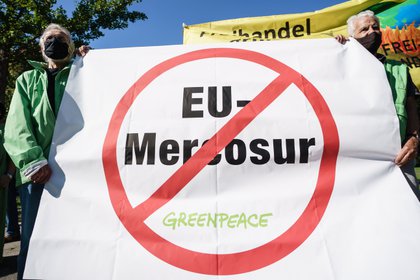 The crisis of multilateralism, with the competition between the United States and China in the background, and the lesser push from the current leaders of the EU and Mercosur explain the difficulties in carrying out the agreement between the latter two blocs, according to analysts. . / EPA / CLEMENS BILAN / Archive

Madrid, Nov 17 . .- The crisis of multilateralism, with competition between the United States and China in the background, and the lesser push from the current leaders of the EU and Mercosur explain the difficulties in moving forward with the agreement between these two last blocks, according to analysts.
The pact between the EU and Mercosur (Argentina, Brazil, Paraguay and Uruguay), closed in 2019 after twenty years of negotiations, has yet to be ratified, although France, the Netherlands and Austria, critical of Brazilian environmental policy, threaten to reject it.
The international context does not help to overcome the obstacles at a “bad time for free trade”, as Anna Ayuso, an expert at the Barcelona Center for International Affairs (Cidob), points out to Efe.
The multilateral system that the World Trade Organization represents has been harshly questioned by the US during the presidency of Donald Trump, amid its tendency to protectionism and the withdrawal of countries, which may be accentuated by the coronavirus crisis.
PROTECTIONIST POSITIONS
Ayuso believes that the EU has manifested “a type of protectionism that relies on the protection of the environment”, specifically in the Brazilian Amazon.
He argues that the EU-Mercosur agreement already reflects the commitment to comply with the Paris Agreement against climate change, to which can be added an annex that establishes monitoring mechanisms, as demanded by environmentalists.
“Latin America maintains that window of opportunity (in favor of the treaty)” and “Europe cannot afford” to back down, says the specialist.
Not only for an image issue or for defending multilateralism, but also because the EU would allow it to strengthen ties in a region where the US maintains a strong influence and China “is eating a large part of the cake.”
COMMERCIAL COMPETITION
For the emeritus professor of Economics and Finance at the Esade business school Roberto Tornabell, China will gain positions if the EU “withdraws” from Mercosur, which may also benefit other Asia-Pacific competitors such as India or Indonesia.
“In the world, only Latin America remains as a major agricultural supplier,” underlines Tornabell, who believes that behind the reluctance of countries like France hides the desire to protect their farmers from imports of agricultural products, for which he proposes to grant compensation to those who are harmed.
The academic defends the latest trade agreements signed by the EU with countries such as Japan or Canada, in contrast to the tensions caused by the tariffs imposed by Washington on European products as a result of the contentious Boeing-Airbus and the tough Brexit negotiations.
PARTNER WEAKNESS
Adding to the weakening of the multilateral system is that of the EU itself due to its internal fractures and its lesser relationship with the US, according to Ignacio Bartesaghi, dean of the Faculty of Business Sciences of the Catholic University of Uruguay.
Remember that the agreement between the EU and Mercosur was driven by the “geopolitical interests” of both sides, although now it suffers from a lack of leadership.
If former presidents Mauricio Macri (Argentina) and Michel Temer (Brazil) advanced in order to open new markets after the previous economic crisis, their successors in office, Alberto Fernández and Jair Bolsonaro, have not seen it the same.
Argentina, with serious economic problems, has chosen to strengthen its ties with China in recent years and Brazil has just signed new trade facilitation agreements with the US, while continuing to allocate a third of its exports to the Chinese market.
Bartesaghi also misses European leadership now that German Chancellor Angela Merkel “is on the way out” and French President Emmanuel Macron is under “internal pressure.”
LONG TERM VISION
The agreement, beyond economic or standard issues, obeys – in his opinion – “a geopolitical bet with a great differential with respect to the US and China” in a context of strong competition.
Bartesaghi clarifies that “the world changed three times in twenty years and the benefits of the pact in which it was thought do not have to do with the impacts of now”.
According to the analyst, its entry into force would represent a leap in cooperation, generate good practices, improve the image of Mercosur by associating it with Europe and provide the EU with an instrument to advance investments and policies in the medium and long term.
The University of Buenos Aires researcher Damián Paikin highlights that the pact is, for Mercosur, “an opportunity to re-locate itself on the Atlantic axis”, after years of growing Chinese influence in the region.
It specifies that the coronavirus has caused a sharp drop in interregional trade and an even greater dependence on China, which has recovered and continues to import Argentine and Brazilian soybeans.
“Global change seems to be quite clear: either an agreement is reached between the powers of the EU and the US where the other actors can participate, or other alternatives such as the model proposed by China will be developed,” says Paikin.
Belén Delgado