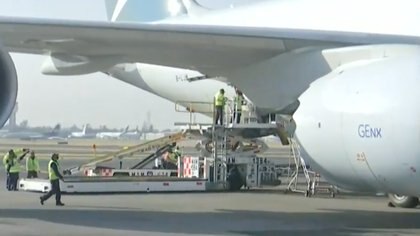 This Saturday morning, the first shipment of 200,000 Chinese Sinovac vaccines arrived at the Mexico City International Airport and was received by Martha Delgado, Undersecretary for Multilateral Affairs and Human Rights of the Ministry of Foreign Relations (SRE).

The shipment arrived at 8:28 in the morning where officials from the Chinese embassy and the director of the pharmaceutical company Birmex were also present.

The chancellor Marcelo Ebrard reported this Friday the arrival in Mexico of the first 200,000 doses of the Sinovac vaccine against COVID-19, out of a total of 10,000,000, agreed.

“Two hundred thousand doses of the Sinovac vaccine left Hong Kong for CDMX, they will arrive at dawn tomorrow. Ten million more will arrive in the coming weeks. Mexico appreciates the invaluable support of the Ambassador of the People’s Republic of China Zhu Qingqiao to achieve this. Thanks!!”, said the head of Foreign Relations through his official Twitter account.

The president of Mexico, Andrés Manuel López Obrador had advanced last Tuesday that there was already an agreement for the first million vaccines.

“Sinovac will close the agreement next Monday for 1 million vaccines. Of those vaccines, we are going to use 200 first and the remaining 800 thousand have to settle, ”he said in his morning press conference.

According to the president, the process of preparing the vaccine requires that it rest for approximately 15 days before being administered. In such a way that most of the vaccines will remain under protection during that period of time, “but this is already in our country,” the president explained.

The vaccine developed by Chinese pharmaceutical company Sinovac is called CoronaVac and it’s about a chemically inactivated version of the SARS-CoV-2 virus, the cause of COVID-19. It is different from other vaccines such as the one developed by Pfizer-BioNTech, which occupy strands of virus DNA to signal the cells of the vaccinated person to produce some SARS-CoV-2 virus proteins that are then detected by the immune system that develops defenses against the virus.

In the case of CoronaVac, a “traditional” method is used in which an inactive and safe version of the virus is introduced into the body of the vaccinated person so that the immune system recognizes it and develops the defenses to fight the disease.

Based on the results of phase 1 and 2 clinical trials to evaluate the safety, tolerability, and ability of the vaccine to elicit an immune reaction in humans, the vaccine is capable of protecting against COVID-19 without producing serious adverse reactions. For phase 2, a group of 118 people were given 6 micrograms of the drug, with a second dose at 28 days. The results revealed a robust immune response: the 118 vaccinated people generated antibodies against the SARS-CoV-2 virus.

Furthermore, the same study also showed that CoronaVac can produce a sufficient immune response if the second dose of the vaccine is administered within 14 days of the first.

Regarding side effects, the Brazilian government, the country where phase 3 clinical trials are being carried out, revealed that After the first dose, only 19% had local pain at the injection site and 15% had a headache. After the second dose, the Butantan Institute, which is conducting phase 3 clinical trials for CoronaVac, again reported 19% relative to local pain, 10% of people had headaches, 4% of the people suffered fatigue and only 0.1% had a low fever.

Regarding fever, both the advances made by the Butantan Institute and the phase 1 and 2 trials indicate that this It is one of the vaccines that causes the least fever compared to others like Pfizer / BioNTech or AstraZeneca.

The Butanta Institute is also preparing a factory in the interior of the South American country to produce the Chinese vaccine. According to information from the Brazilian government, the Portuguese-speaking country will have the capacity to produce 100 million doses of the vaccine.

So far, the results of phase 3 of the CoronaVac trials. However, these are taking place in 5 countries: Chile, Brazil, Indonesia, Turkey and China.

Hugo López-Gatell Ramírez, Undersecretary of Prevention and Health Promotion, reported that the Russian vaccine against COVID-19 Sputnik V will arrive in Mexico on Monday around 11 pm.

The quantity is the same as the shipment from the Asian country, and it will be a part of the 24 million agreed with the Russian authorities.

Although they did not provide details about the entities in which the vaccines that arrived this Saturday will be destined, López-Gatell declared that they will be “two territorial demarcations of Mexico City and a conurbation municipality with a high population”. However, due to the storage conditions of Sputnik V, which requires freezing to -20 degrees Celsius, it is likely to be used in a largely urban area. That way, each of the packages will go to a different state.

Coronavac and Sputnik V vaccines will arrive in the next few days; will be applied in the Valley of Mexico“The best vaccine is the one that arrives sooner”: Martha Delgado assured that there are 198.3 million anti-COVID-19 doses insuredMap of the coronavirus in Mexico February 20: five states in the center of the country concentrate the highest number of deathsVaccination in Mexico: more than one million people received immunization to COVID-19; 68% are older adultsEfficacy of the Sinovac vaccine is 90% in normal people and 50.3% in health professionals: MinSalud