The company of the always controversial Lapo Elkann has presented a spectacular modified example of the Dallara Stradale, whose decoration pays tribute to the Fiat G.91 aircraft that were used by the Frecce Tricolori, the Italian national aerobatic patrol, between 1963 and 1982.

The Dallara Stradale has not turned out to be a very media model. After its presentation, which took place no less than in 2017, practically We have not seen any relevant news featuring this spectacular Italian open sport. Although it is a limited edition model, the truth is that it has a production of 600 copies, much higher than that of other models.

Given its nature and origin, a radical carbon boat manufactured by one of the most renowned specialists in the world of competition, it is normal that this model has less diffusion than those belonging to established manufacturers like Ferrari, Lamborghini or McLaren. Since it is a product only for the very amateur and that also does not have the support of the extensive commercial network and marketing resources of conventional brands. 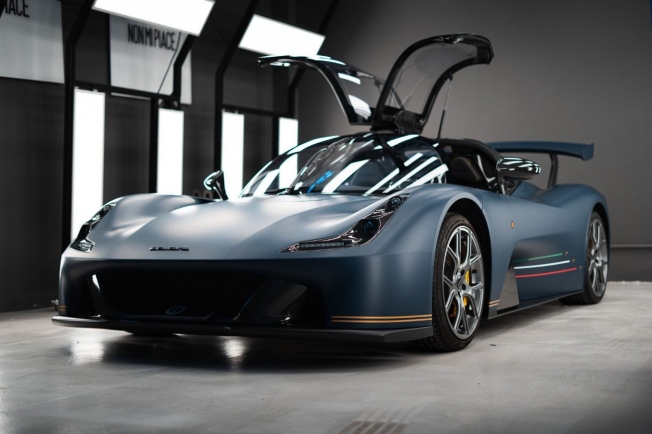 Inspired by the world of aviation.

However, the radical first street model from Dallara is still a very interesting model and the first copies are already in the hands of its lucky owners. The unit that stars in these attractive photographs is precisely the first that we have evidence that has undergone a customization work, which has been run by Lapo Elkann’s design and customization company, Garage Italia.

The company of the famous Italian executive has carried out an attractive customization job on one of the first manufactured copies of the Dallara mid-engined sports car, although we are not simply talking about a new color scheme, as behind the decoration of this example we find a whole tribute to the Italian national air patrol, the famous Frecce Tricolori, and one of the planes that were used by this aerobatic team for decades, The Fiat G.91. This unit has the bodywork finished in an attractive dark blue tone and a matte texture combined with a series of graphics similar to those that we could find in the planes of this group, with the colors of the Italian flag or some symbols in yellow.

Only 600 copies of the Dallara Stradale will be manufactured and so far only a mechanical variant has been announced, equipped with the same 4-cylinder 2.3-liter EcoBoost engine that mounts the current Ford Mustang, although under the hood of the Italian sports car it delivers 405 hp. This enables Dallara’s small 855kg sports car to reach 100 km / h in just 3.2 seconds., with a maximum speed of 280 km / h.