In March 2020 the new species Oculudentavis khaungraae was described in an article in the journal Nature from a little skull 99 million year old trapped in a Myanmar amber stone. His elongated jaw, large eyes, and short, domed cranial box led the research team to believe they were in front of avian dinosaur smallest ever found, about a size similar to hummingbird smallest known.

The specimen puzzled us all at first because if it was a lizard it was a very very rare one!

The team concluded that this supposedly flying little creature was remotely related to the famous bird extinct Archeopteryx. But after its publication, some outside experts were skeptical about the identity of the animal and studies were quickly carried out that questioned this interpretation. Definitive evidence would come shortly thereafter in the form of a second extraordinarily well-preserved specimen found in the same mine as O. khaungraae.

The scientists Arnau Bolet, researcher ‘Juan de la Cierva’ at the Institut Català de Paleontologia Miquel Crusafont (ICP) and Juan Daza, from Sam Houston State University, among others, had begun in 2019 to work with a fossil specimen in amber that included a skull and parts of the skeleton: a small fragment of the spine and the shoulder girdle. The research team was excited because the fossil displayed some morphological features that they had never seen before.

“The specimen puzzled us all at first because if it was a lizard It was a very, very rare one! ”Says Bolet. It was not until a few months after learning about the Oculudentavis holotype at a scientific meeting, that they finished their study and concluded that both specimens could be considered without a doubt as members of the same genus of lizard. Finally, on July 22, 2020, the article that Oculudentavis khaungraae described was withdrawn by its authors, “to prevent inaccurate information from remaining in the literature.” The description of Oculudentavis khaungraae did hold.

This second specimen, described as a new species within the genus Oculudentavis, was baptized as O. naga to honor various ethnic groups native to Northeast India and Northwest Myanmar. The study was published today in the journal Current Biology.

Both fossils (the holotypes of O. naga and O. khaungraae) were digitally segmented using a computed microtomography scanner to obtain detailed images of each of the individual bones and to better study the differences between them.

We concluded that both specimens were similar enough to belong to the same genus, Oculudentavis, but presented a series of differences that suggest that they are different species.

“The moment we got the first tomographic images we started brainstorming what animal it could be,” he explains. Juan Daza, assistant professor of biological sciences at Sam Houston State University. “In the end, the detailed study and our analyzes helped us to clarify their position,” he adds.

The team also determined that both skulls had deformed during the process of fossilization. O. khaungraae’s nose had narrowed and reminded the nebwhile O. naga’s skull had been compressed. These deformations reinforced the avian characteristics of one of the skulls and the reptilian ones of the other.

Imagine that we pinch the nose of a lizard so that it takes on a triangular shape. It would be much more like a bird! ”, Says the study co-author Edward stanley, director of the Florida Museum of Natural History’s Digital Discovery and Dissemination Laboratory. 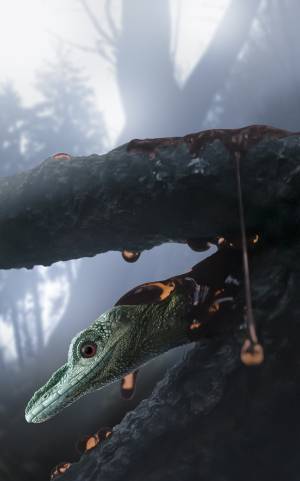 Recreation of the living appearance of Oculudentavis naga before being trapped in resin. / Stephanie Abramowicz / Peretti Museum Foundation

“We concluded that both specimens were similar enough to belong to the same gender, Oculudentavis, but they presented a series of differences that suggest that they are different species ”, explains Bolet. Oculudentavis is distinguished from other lizards by different features, such as the snout with a tapered crest, the very long jaws formed by a long dental portion and a very short postdental portion, or the configuration of the palate.

These and others morphological characteristics make it a strange looking lizard, but some key characteristics such as the type of implantation of the teeth, the shape of the squamous bone or the way in which the lower jaw articulates with the skull, are sufficient evidence to identify it as such.

With all this information, the team was able to conclude that Oculudentavis was not a bird and that its resemblance to birds was due to the convergence in the proportions of the skull, that is to say that “despite its domed skull and its long, slim snout, in reality it does not present any physical character that supports the idea of ​​a close relationship with birds ”, he says. Susan evans, co-author of the study and professor of Vertebrate Morphology and Paleontology at University College London.

With all this information, the team was able to conclude that Oculudentavis was not a bird and that its resemblance to birds was due to the convergence in the proportions of the skull.

How to study Burmese amber

While the amber deposits of Myanmar they are a treasure of fossils found nowhere else in the world, Daza explains that there is a consensus among paleontologists that sourcing Burmese amber ethically is increasingly difficult, especially after the military took control of the country in February. .

The specimen of O. naga was acquired following the ethical guidelines for the use of the burmese amber established by the Society of Vertebrate Paleontology and is kept in the Peretti Museum Foundation (in Switzerland), while that of O. khaungraae is part of the collection of the Hupoge Amber Museum (in China).

The Peretti specimen was purchased from licensed companies that legally export amber pieces from Myanmar, following a code of ethics that ensures that no human rights violations were committed during its extraction and commercialization and that the money derived from the sales did not support the armed conflict. The fossil has authenticated traceability, which includes export permits from Myanmar.