In the opinion of the American monetary authority, the upward seasonality will give way to price increases of around 2%, before justifying its intention not to move interest rates close to zero until the end of 2023.

The approval of the third stimulus programThe first of the Biden Administration, endowed with 1.9 trillion dollars, has itself generated a heated debate among economists and market analysts about whether or not the specter of inflation in the US will reappear. The volume of subsidies, the predominant condition of direct aid to citizens and, consequently, the enormous catapult that this greater income capacity will imply on the availability of spending by Americans throughout this exercise of activity take-off, has sounded the alarms about a substantial increase in prices. The expectations of the Federal Reserve, in its latest economic report, admits this upward trend. Until placing them at an unknown level in seven years. Specifically, at 3.1% in February, as witnessed by the survey on consumption carried out by the New York Fed. The highest level since July 2014, the year in which the American economy reached the cruising speed of the cycle between crises, which began with the credit-crunch of 2008 and culminated in the Great Pandemic. The longest period of prosperity in the recent history of the world’s leading economy.

The American monetary authority, however, adds warm cloths to the inflation fever. He insists that these are expectations and that his long-term trend, three years ahead, is that the CPI will remain around 3% for the next three years. And remember that it has followed a trail above 2% since the early 1990s, suggesting that inflation has not exactly been one of the endemic risks of the US economy. A message that also tries to calm the markets. Because the Fed’s monetary policy is based, unlike that of the ECB, dominated exclusively, by statutory mandate, on controlling prices below 2%, on two other parameters that are equally transcendental: the dynamism of GDP and the employment creation. Aspects that take on a special role at a critical time for the activity to take off, conditioned by the health crisis and the evolution of the vaccination campaign, and to recover the, still, 10 million jobs that have been lost since the beginning of the epidemic. And that, at the same time, they are vital so that the increasingly optimistic predictions of the businessmen in the economic future of the country and the analytical predictions of the market are fulfilled, which do not rule out double-digit GDP vigor rates to throughout any of the quarters of this fiscal year.

The Fed, therefore, does not attach special importance, at this time, to the more or less bullish behavior of prices that are considering the future hypotheses. The situation in the coming months, in any case, will determine the decisions of the Open Markets Committee of the Federal Reserve.

Although, for now, even its president, Jerome Powell, has decoupled a rise in prices at the beginning of upward movements in interest rates, although much care has been taken to clarify “the relatively weak inflation” of the last decade and the absence of “clear components” that can reverse the trend and “promote a change in monetary management.” In fact, In February, the Fed kept its prediction of a CPI of around 2% unchanged until the end of 2023. Even so, it will closely monitor specific inflationary rallies. Such as real estate prices, which jumped 4% in February, the highest level since May 2014. Or gas hikes, which rose to 9.6% from 6.2%. Above the market forecast. Faced with the prospects of a 4.6% growth in household spending, again at levels not seen since 2014; this time, since December. And an increase in family income of 2.4%. Still dim, but on the rise and, of course, at the most dynamic rates since the beginning of Covid-19. This is the official argument of the Federal Reserve.

We analyze the sector hardest hit by the pandemic and its recovery prospects based on vaccinations. Do not miss it.

This debate is also lacking in detractors of inflation who, like the former Secretary of State for the Treasury, Larry Summers, raised it graphically in an IMF seminar prior to the arrival of the epidemic. The industrialized powers – he said then – are not well prepared to face the next recession. In his opinion, they err in the diagnosis: “the excessive concern for inflationary control is a serious error; price rises are not, by far, the priority risk ”of large economies. The most pressing issues, Summers argued, are how to maintain dynamism and achieve full employment. “The economic contraction will happen and, when it does, a race to cut interest rates will begin, but these monetary decisions will not provide room for maneuver to light the fuse of a new business cycle”. Summers justified it in the following way: in the last 300 years, the average rebound in world inflation has barely been 1%, while the price of money has been close to 5%. And he wonders: Who chose the 2% range as the maximum limit to declare an economy in an inflationary state? Summers does not see any changes in the trajectory of the post-Covid business cycle in the US, either due to inflationary pressures or interest rate pressures. As, in your opinion, it has happened in the last 40 years, as you just pointed out in The Economist. 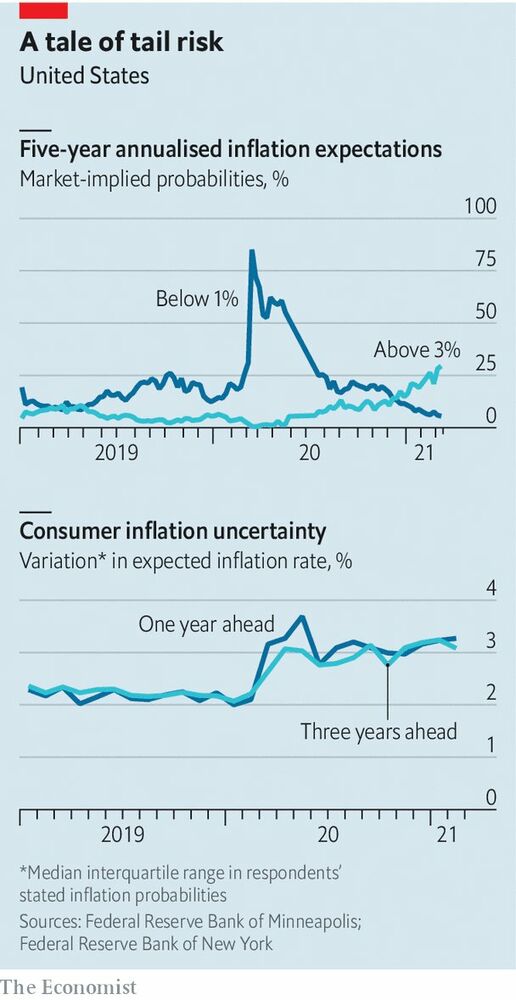 A pattern that Powell seems to follow as well. The Fed chairman eloquently explained it on March 17: “having inflation expectations anchored at 2% gives us the ability to put pressure when the economy shows signs of weakness”. As in the first quarter of the year, in which the same prediction calculations of the Fed -remembered in Goldman Sanchs, reveal that, in recent years, the inflationary outlook has oscillated up or down just four tenths. There is a primary reading, which speaks of uncertainty among analysts about where the CPI will be at the end of this year and in 2022, say its experts. While Joseph Gagnon, from the Peterson Institute, warns that a rise in interest rates supported by price increases will disrupt investment and business confidence about the consolidation of the American economic takeoff.

On Wall Street, the dialectic about whether a new inflationary era is coming in the US has also been accentuated. A recent Bloomberg review by asset managers at various investment firms shows concern about the risk of the IPC rebuilding capital portfolios. The invisible force of prices, warn from Goldman Sachs, has shown, for example, the power of influence in the last half century of the revaluation of fuels. Something that, From JP Morgan, they believe that, on this occasion, it will not have direct effects because a large part of the portfolios are being reconfigured towards green sectors or other buoyant sectors such as infrastructure.. Pimco considers that the inflationary obsession of the markets is, in fact, a close watch on the central banks to determine the investment objectives in the next 18 months.

Jim Reid, managing director at Deutsche Bank, explained to Business Insider that the reopening of the American economy has transferred concerns about inflation to the markets, in the same way that it happened in the financial crisis of 2008. Diagnosis shared by Arend Kapteyn, of UBS, for whom these expectations will be unusually prolonged in time and will hamper the methodologies of the prediction models. Among other reasons, because there are still serious doubts about the success and, above all, the end of the vaccination campaigns. Even though, At the moment, the omens do not link the beginning of the economic cycle with the periods of the so-called Great Inflation, in the mid-sixties, and the beginning of the eighties, in which periods of high interest rates followed.. “A decade ago, after the credit crunch, this dilemma was already generated in the markets, with fears that a brilliant recovery of the economies would bring with it an inflationary bubble, but prices showed, however, a secular stagnation”, says Kapteyn bringing up Summers’ phrase with which he wanted to describe the essential characteristic of the business cycle that emerged between the Lehman Brothers bankruptcy and the Great Pandemic: long, but slow economic dynamism, with low inflation.

At Pimco they subscribe to this theory. Their forecasts set an acceleration of the American CPI at 2% in the coming months, an indicator that will fall to 1.5% by the end of 2021. That is, Biden’s stimulus program will have virtually no effect on prices. Despite the 1,400 dollars of personal allowances and the 3,600 dollars of tax benefits for children under 6 years of age that the measure contemplates. Or the 350,000 million given to states and cities to provide aid to companies and industries. Which is consistent with the idea launched a few dates ago by Powell that “I would be comfortable allowing a rise in the CPI above 2% for a sustainable period.” For Pimco, the US GDP will rise, with the new budgetary fuel – which added to the two previous ones, raise the total monetary injections of the White House above the size of the German economy (more than 5 trillion dollars), three times more than the disbursements it mobilized after the 2008 financial crisis – between 7% and 7.5%, a rate never seen since the early eighties. AND a speed that exceeds the growth forecast for China, which in S&P Global is 6.4%.