SSD endurance was a debated issue when this technology hit the market. Some models of the first generation had problems of use, they did not measure up in durability and it began to be doubted that they could become the great alternative to hard drives as promised.

The following generations improved the situation and the resistance tests that were carried out confirmed the increase in reliability, which together with the multiple advantages of this format compared to hard drives (performance, consumption, noise or heat emission) have ended up making it the great standard for internal consumer storage and its massive introduction in servers and data centers only it’s a matter of time.

The basic design and operation of solid state drives should be clarified here. They are based on NAND flash memories and do not have any moving parts, which already gives it a substantial advantage over the mechanisms of hard drives, but the successive writes memory cells are eroding individual both in capacity and performance, something inherent in this type of flash storage.

Manufacturers install additional cells for when the first ones fail to replace them. In addition, they offer conservative write durability figures of Tbytes. But nothing lasts forever And like any electrical / electronic product it will end up running out or failures. How much? More or less than hard drives?

BackBlaze is a cloud storage services company and has been publishing a storage unit reliability report for years. The statistical study is carried out on the basis of the error rate of its own infrastructure, since a company like this manages tens of thousands of units in its data center, working piecemeal (24/7) and adding up to billions of hours of individual activity.

Thus is a good barometer to check reliability, although it should be clarified that the failure rate registered in its reports not only includes a direct failure of the drives, but also synchronization failures are added to the RAID arrays or operating values ​​above an intelligent statistics system that uses .

The last two years you have added solid state drives to your hard drive arsenal and the bottom line is that the endurance of SSD is higher than that of hard drives. The failure rate of these drives has been compared to another group of HDDs that Backblaze says have been performing “the same functions in the same environment” over time. 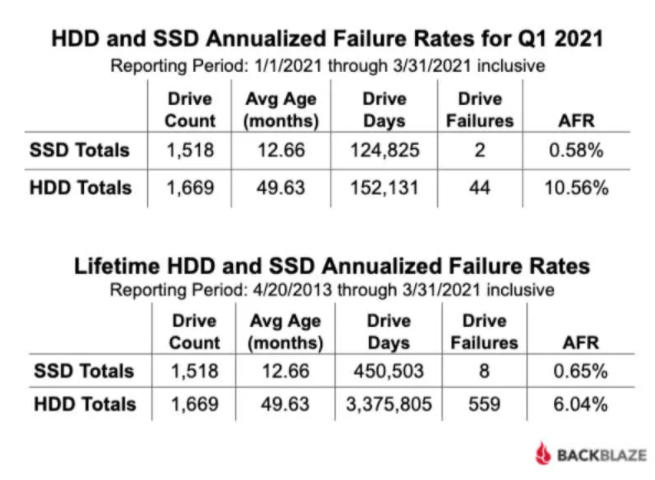 The only thing to note is that not enough time has passed on the age of the drives, which can skew the data a bit in favor of SSDs and was the reason the vendor didn’t break them down by individual models. Furthermore, it has not been stated whether the units used are of the MLC type or the newer, cheaper and dense, but less resistant, triple and quadruple cell TLC and QLC. It would also be interesting to see if the report encrypts the error rate of SATA or PCIe NVMe drives. We assume that this data will be published in the future.

In any case, it is good news for consumers. The resistance of the SSD must improve that of hard drives and the resistance level of Tbytes writes offered by manufacturers is not usually achieved in consumer equipment, except for very particular activities such as mining with Chia that can destroy them. Finally, cite the five-year extension that most manufacturers are offering as a guarantee for consumer SSDs.