What’s new on Netflix, ‘The woman at the window‘, is full of narrative twists and surprises that we analyze step by step. The best suspense movies and thrillers on Netflix.

With echoes of ‘Rear Window’ and other classics from Alfred Hitchcock, the new movie premiere on Netflix, ‘The woman in the window‘, composes a thriller full of tension, narrative twists and glasses of red wine. Directs Joe wright (‘Pride and Prejudice’, ‘Atonement’) and writes Tracy letts, based on the bestseller of AJ Finn where an agoraphobic woman witnesses a murder through the window of her neighbors across the street and enters a spiral of obsession where it is difficult for her to distinguish between reality and her hallucinations.

The movie, starring Amy adams and with a cast that includes faces as well known as those of Julianne Moore, Gary oldman, Wyatt russell Y Jennifer jason leigh, has landed on ‘streaming’ after a difficult journey through the delays caused by the pandemic and the little confidence of 20th Century Fox in the final material. The result is a thriller in the style of ‘The Girl on the Train’, with unreliable narrators and unexpected twists, in addition to that ‘Hitchcockian’ touch that in the end ends up getting closer to a Brian de Palma eighties.

But beyond her references, her tumultuous road to the premiere and what the critics have said about her, here we come to talk about the end. What did the great mysteries of history hide? Was Dr. Anna Fox crazy or was it the others who were wrong? Who is the murderer? Which side was Punch the cat really on?

The first surprise that ‘The woman in the window’ gives us is not that blood splattered on the camera lens suddenly (which too), but the revelation that the character played by Julianne Moore is not Jane Russell, the neighbor of Dr. Anna Fox. The protagonist had an episode of agoraphobia at the door of the house on Halloween night and this woman helped her compose herself, and afterwards they spent several hours together drinking wine, taking pictures of the cat and sharing confidences . The guest did not first identify herself as Mrs. Russell, but Anna took it that way and she did not contradict her.

As you will find out later, days after you saw her being murdered, that woman is actually named Katie. Yes it is the biological mother of the Russells’ teenage son, Ethan (played by Fred hechinger), but no longer the wife of Alistair Russell (Oldman) nor does she live across the street. It turns out that the woman abandoned her husband when she was eight months pregnant and disappeared, until two years later they finally found her in a commune of drug addicts. Alistair took baby Ethan and Katie went to jail. Since then, the Russells have been on the run from her and finally gave her money to get away from them. Anna also finds out that Katie spent the night with her basement tenant, David (Wyatt Russell), but he has nothing to do with all this tangled family plot.

Wow, Katie seemed to be putting her life back together after her time in prison and reconnecting with her son, and she was running into opposition from her ex. But then, Where does murder come into this equation? Would Alistair Russell be able to shake her off like that? Everything points in that direction, and that is what the protagonist of the film believes, but the truth will still take time to reveal itself. 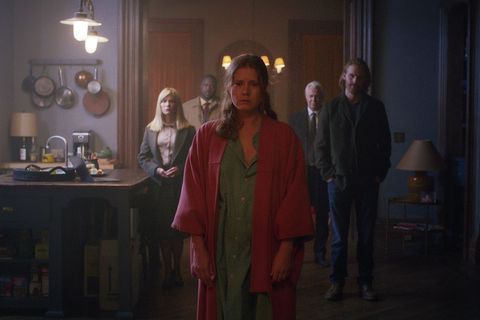 Throughout the film, we realize that Dr. Anna Fox is not in her best sense. He drinks constantly while doing classic movie marathons, mixes medication with alcohol, tends to paranoia and hallucinations … It is not easy to trust that what he has seen is real and not the result of his delusions as a sick person. But what we will soon discover is the reason for her current psychological state, which is not the separation from her husband: actually both he and his little daughter are dead. Those calls we heard in voiceover and their usual discussions? Yes, those were hallucinations. Therefore, knowing this, We have no trouble believing (nor the police either) that he has also been seeing things that are not through the front window.

But what happened to his family? It turns out that the marriage to her husband (played by Anthony Mackie) started to go down the drain when she started having an extramarital affair. That infidelity cracked the foundations of the couple and made things difficult for their young daughter Olivia. One night Anna was driving through the snow and arguing hard with her partner, and with the girl in the back seat, until a mistake led them all to get off the road. The protagonist was the only survivor of the accident, and guilt has consumed her in such a way that she has managed to suppress all the memories of that event. She was convinced that her family was still alive, simply because she did not want to face the reality of what had happened. Well, until Detective Norrelli (Jeanine serralles) snaps at her: “Dr. Fox, your family is dead.”

Unable to forgive herself, and terribly ashamed of everything that has happened with the Russells, Anna tries to commit suicide. He even records a video with his mobile clarifying his motives and exonerating anyone who could be a suspect. But, shortly after, he discovers something that turns the situation around again: a photo he took the night he spent with Katie, confirming that it is real. That was there. And that someone has murdered her. Who? 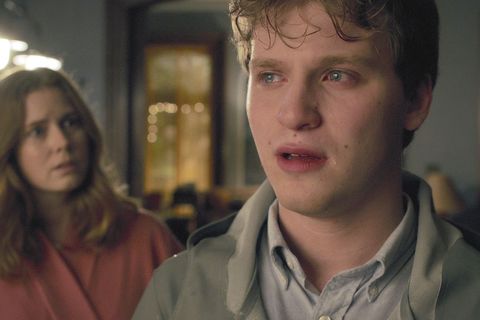 And the final twist comes courtesy of Ethan, the Russell’s son, revealed to be a potential serial killer. He even assures that he is still perfecting his style, having murdered not only his mother Katie, but also his father’s assistant in Boston, Pamela Nazin. We know all this when he appears in the middle of the night at Anna’s house. Well, to be more exact, he has been there practically the whole week: as he reveals, his parents, possibly aware of his violence (perhaps even of his crimes, although it is not clear), They wanted to send him to a show in New Hampshire, a kind of prison, but he never went and has been hiding in the shadows of Anna’s home. Of course, he was the one who took the sleeping photo of her and sent it to her by e-mail.

When all this information comes to light, the first victim to fall into the crossfire is David, who Ethan stabs on the stairs before he can help his landlady. The idea is that Anna’s look like a suicide and also carry the dead. But Anna is ready to fight. Thus begins a chase up the stairs and up to the terrace, where it rains heavily and the protagonist ends up with three holes in her cheek. However, he will win the game by throwing Ethan through the ceiling window. 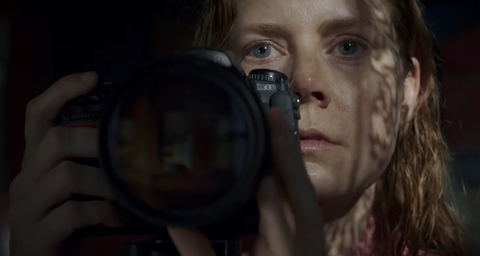 It seemed that not, but ‘The woman in the window’ has a relatively happy ending. The whole story has actually been express therapy for Anna Fox, who has learned to forgive herself for what happened to her family and You’ve hit so deep that the only thing you can do now is go up. And so it does. No more red wine, no more Hitchcock movies or evenings spying on your neighbors from the window. At the hospital, Detective Little (Brian Tyree Henry) informs him that Katie’s body has been found, the Russells are in custody, and it is quite likely that they are involved in some way. And then there is the symbolic moment: he returns his mobile phone and tells him that, if he wants, he can delete his pre-suicide video before he processes it at the police station. Go that gives you the opportunity to clean the slate.

Nine months later Anna has recovered, overcome her agoraphobia and sold her Brooklyn home, ready to start a new life in another place without so many memories and with less blood. And it takes the Punch cat, of course, not to worry. Thus, ‘The woman in the window’ leaves us with a good taste in the mouth regarding the outcome for its protagonist, and a slightly bitter taste in the botched effective blows of its history. What would Alfred Hitchcock say!