The president-elect of the United States, Joe Biden, narrowly defeated current President Donald Trump in the state of Georgia on Thursday, a traditionally Republican stronghold, in which there had not been a Democratic victory since 1992. While the Republican won by just over 1% in North Carolina. With these last two results, the final count of voters It was 306 for Biden and 232 for Trump, confirming the victory of the democrat.

Biden had already been announced the winner of the election on Saturday after winning the 20 Pennsylvania electoral votes, exceeding the required threshold of 270 votes. Although Georgia and North Carolina still did not report final results at the time, they could no longer influence the final result. Trump, however, refused to concede defeat and is now trying to challenge the election on the grounds of fraud and going to court, although so far he has not presented strong evidence.

Biden’s victory in Georgia – which brings in a total of 16 electoral delegates – a state that was once Republican but whose politics has shifted to the left, confirms that a total of five states passed from Trump to Biden in 2016. , in 2020. The others were Arizona, Michigan, Pennsylvania and Wisconsin. 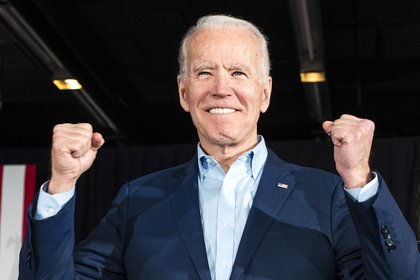 In the image, Joe Biden, the US president-elect . / EPA / JIM LO SCALZO

Biden increased his vote flow in Georgia as the post-election days progressed, thanks to his dominance in Atlanta, Savannah, and increasingly pro-Democrat suburbs, transforming what appeared to be Trump’s safe state into one of the closest races of the election.

Trump boosted near-record turnout in rural southwestern parts of the state bordering Alabama and the Florida Panhandle, the white outer suburbs and small towns, and the northwest of the Appalachians, That touches the deep red of Tennessee. Biden, for his part, was buoyed by high turnout among black voters in Atlanta and surprised with some suburban white regions in the moderate counties that surround the city.

Between 1972 and 2016, Georgia was won by Democrats just three times, the last one was for Bill Clinton almost 30 years ago. In this context, there are not a few who attribute this new victory to the leader, writer and activist Stacey Abrams. 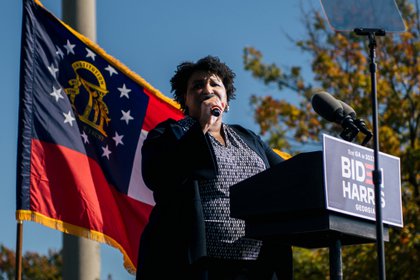 After losing the gubernatorial campaign in 2018, she and her former campaign manager, Lauren Groh-Wargo, went to work to get the victory for Joe Biden, maintaining the seat in Congress already owning the state and getting another. That would add to a possible seat in the Senate, of the two that are disputed and the House of Representatives of the state itself, as well as the next distribution of districts for the future ten years.

So, Abrams was the person who got more votes than any other Democratic candidate in Georgia’s history.

And is that Georgia, one of the southern states hardest hit after the Civil War, and also one of those with the highest population growth, was the ideal setting to guide the campaign to achieve that minorities that sometimes do not exercise their right to vote will not miss their opportunity.

Although the media gave Biden the winner in the presidential elections, Trump has not acknowledged his defeat and has claimed, without proof, that there was electoral fraud. 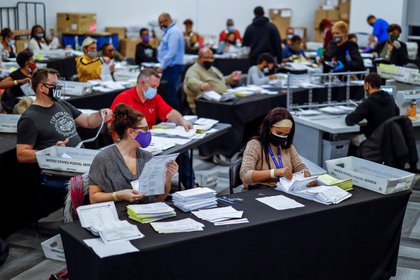 Absentee ballots are processed and verified by the Fulton County Registrar and Elections Department at the State Farm Arena in Atlanta, Georgia, on November 5, 2020. . / ERIK S. LESSER

This Thursday, Donald Trump’s campaign lawyer, Rudy Giuliani, reiterated the allegations of electoral fraud made by the president and that have not been verified. In a press conference in Washington DC, Giuliani, who is also Trump’s personal lawyer, listed over an hour and a half different legal fronts through which they will seek to reverse the results of the elections.

Due to the narrowness of the result, Georgia began last week the counting of the election votes, a process that was estimated to last five working days and concluded this Thursday

The hand tally of the nearly five million votes and, after All counties will certify their results, it was due to conclude on Wednesday, November 18 at midnight, the Georgia electoral authorities had announced, although it was delayed a day.

The laws of the state indicate that the votes must be counted again when the margin of difference is less than 0.5%, and in this case the Democrat Joe Biden maintains an advantage over Trump, after counting 99% of the total votes, of 14,000 votes, which is 0.3%.

Elections in the United States: the state of Georgia began manual counting of votes