The brains of modern humans and from the great apes they differ in size, shape, and cortical organization. This is evident, above all, in the areas of frontal lobe who participate in complex cognitive tasks characteristic of human behaviors, such as social cognition, the Tools use and the language.

The timing of these differences during the human evolution remains a subject of debate, because fossil remains are needed to understand the evolution of the brain in early hominid species, and brain tissues are rarely fossilized.

A study led by the University of Zurich (Switzerland) now points out that the first humans developed a modern brain organization, similar to that of modern humans, after the first African dispersal.

“Many scientists have traditionally assumed that a human-like brain arose around the same time as the genus Homo. The fact that the skull of the early Homo it was not as developed as was thought, it makes us understand that the evolution of our brain was much more complex and went through several stages, ”Marcia Ponce de León, a researcher at the University of Zurich who is leading the study, tells SINC.

Early Homo had ancestral brains similar to those of australopithecines and anthropomorphic apes, but this brain was capable of amazing feats

According to the analysis of the skulls of the first Homo from Africa and Asia western found in the Dmanisi reservoir (USA), their brain retains a primitive organization of the frontal lobe, similar to that of the great apes. In contrast, Homo Africans of less than 1.5 million years ago, as well as all Homo erectus from Southeast Asia, have a greater brain organization.

“The first Homo had ancestral brains similar to those of the australopithecines and anthropomorphic apes, but this brain was capable of amazing feats: the migration from Africa to Eurasia, the production and use of various tools, the exploitation of animal food sources (they consumed meat) and the care of the members of the group that they needed ”, continues the scientist. 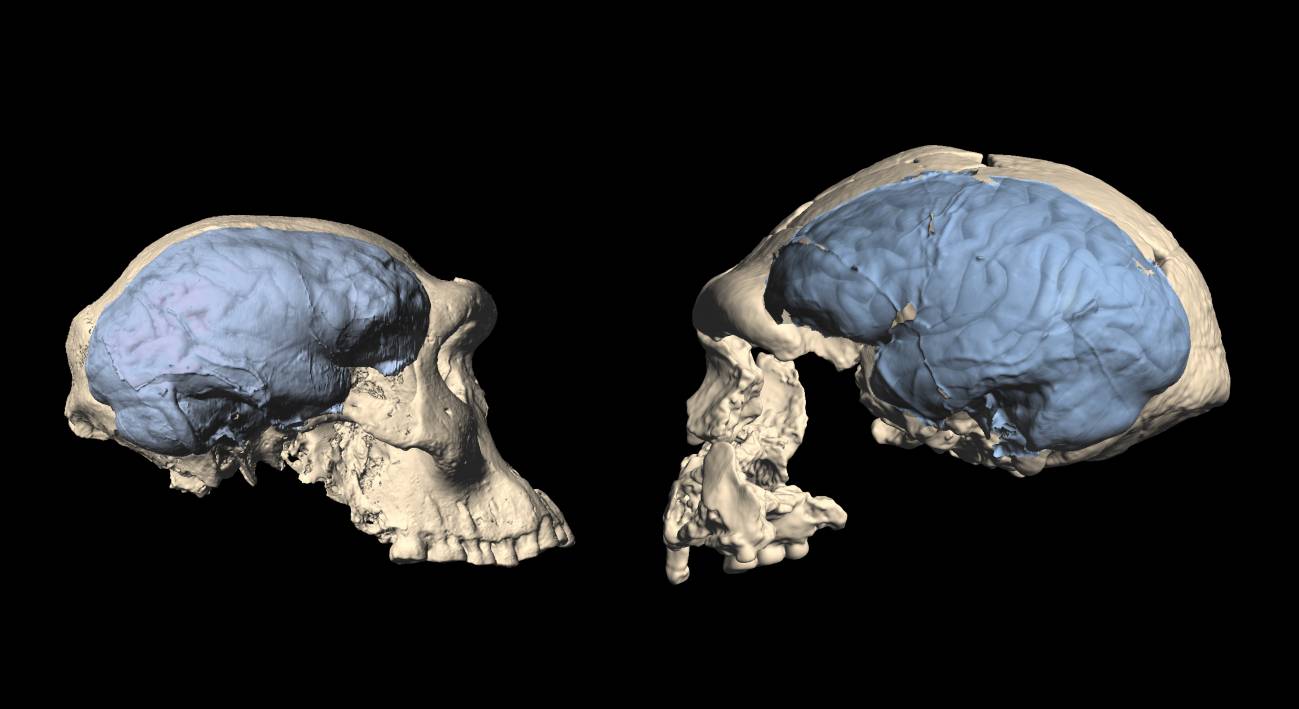 An evolution between 1.7 and 1.5 million years ago

The skulls analyzed for this study belong to the group of Homo erectus. “We believe that the most appropriate is to use only this term, simply because other classifications (H. habilis, H. ergaster, H. rudolfensis) have been difficult to apply consistently to the fossil record. There are as many individual fossil attributions to these categories as there are researchers dealing with this issue, ”he adds.

The scientists were able to verify that a brain similar to that of modern humans evolved in the period between 1.7 and 1.5 million years. “Current fossil evidence suggests that this happened in Africa,” says the expert.

We were able to verify that a brain similar to that of modern humans evolved in the period between 1.7 and 1.5 million years. Current fossil evidence suggests this occurred in Africa

The hominids with modern human-like brains also appear in Southeast Asia shortly after 1.5 million years, pointing to a second dispersal from Africa around this date.

“We have shown that brain areas of the frontal lobes related to these functions increased in size in this period ”, he emphasizes.

Thus, this study indicates that modern human-like brain reorganization was not a necessary trait for the genus Homo, nor was it a prerequisite for its early dispersions in Europe and Asia.