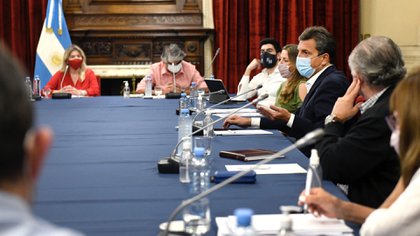 Twelve national deputies of the Frente de Todos, of union origin, met with Sergio Massa in his dual capacity as president of the Chamber of Deputies and author of the bill that seeks to modify the income tax and set a minimum of $ 150,000 to pay that tax. According to the survey he conducted ., several left the meeting satisfied because progress was made in the possible incorporation of the proposals that could extend the exemptions and deductions of the tax.

The meeting took place this Monday, a few days after President Alberto Fernández included the topic in Extraordinary sessions, which is almost symbolic since the next Monday, March 1, the Ordinary sessions are restarted and the Government will no longer be the one that enables the topics. The meeting was the beginning of negotiations to move forward with a project that achieved wide consensus since its presentation but for which several blocks have proposals and requests for improvements.

Legislators of union origin presented proposals to take into account some exemptions to the payment of tax, beyond the 150,000 peso mark. They agreed to meet again within 48 hours and analyze the possibility of modifying the project, which, as it is, implies that 1,200,000 workers stop paying, the equivalent of 40,000 million pesos.

Moyano, former head of the tolls union, spoke about a project of his authorship that seeks to exempt from the payment of Earnings to the Christmas bonus, the extra hours, the extra for night hours, the mandatory holidays and non-working days worked and also the additional ones for productivity , efficiency, zone, uprooting, performance of painful, dangerous or unhealthy work. In the same initiative, he asked to add the legal or conventional compensation derived from the employment relationship. Like other legislators, he warned about the need to set scales in the future. In his initiative, he encourages them to be subject to the RIPTE (prepared by the Ministry of Labor) and the inflation index calculated by Indec, not only the non-taxable minimum, to prevent more workers from paying Profits.

The first meeting for Profits was held in the Hall of Honor and was in person. It is expected that in the next few days the visits of the head of the AFIP, Mercedes Marcó del Pont; the Minister of Labor, Claudio Moroni, and also the Minister of Economy, Martín Guzmán, or a representative of that portfolio. In any case, there is still a new discussion in Congress about remote operation, whose protocol has expired, which would force this week’s meetings to only be informative. The plan is to thoroughly discuss the Profits project during the first half of March.