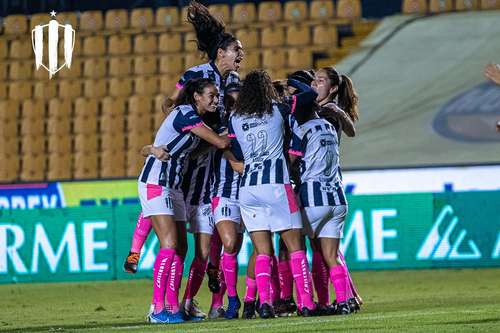 ▲ Monterrey won 2-1 in the Monterrey classic, which was held in the Tigrillas court.Photo Twitter @Rayadas

As of November’s FIFA date, the stellar spaces were transferred to the women’s tournament, which delighted its growing number of fans with some very attractive matches. The leaps and bounds progress of the women’s teams, especially the leaders, is remarkable, and such progress cannot leave the sponsors insensitive who little by little are beginning to glimpse a very striking showcase.

Tigrillas and Rayadas braided on Saturday in a fair fight and even made up the erratic refereeing of Lucila Venegas. There is a real rivalry. The champion Monterrey is a team of prosapia, the history of the women’s team is almost on par with that of Tecnológico, in the style of the universities of the United States. Those of the UANL do not lag behind, they have made good hires and both clubs are the ones that pay their members the best.

For the Rayadas there were accounts to be settled and with their 2-1 victory they ruined the 47-game mark without defeat for the felines at home. Leonardo Cuéllar insists that Chivas-América (they play this Monday) must be, by inheritance of the men’s branch, the main classic, but Héctor Becerra is right, strategist of the nicknamed Rayaditas, because if there is an outstanding clash in the Mx League Feminine is the royal duel.

A year ago, after raising the scepter of monarchs, the Rayadas leaked to the press details of the degrading conditions in which they were treated, with long bus transfers, junk food and trips on the same day as the meeting because the board wanted to save accommodation and meals. The complaint was effective: currently they travel by plane and are installed in the same hotels as the men.

For now, the t-shirts of the women’s teams wear the same advertising as those of the men, however, a brand of sanitary napkins agreed to advertise with the Rayadas and perhaps it will not be late the day when the women’s jackets are covered with holograms and brands of products for women. Perhaps then the directives will reconsider and invest without fear in the so-called man’s game.

There is a date left for the Women’s League and in addition to the teams from La Sultana del Norte, among the applicants they could not miss Chivas, América, Atlas (who stands up for that institution), Pumas and Tuzas. The surprise is the Queretanas, under the baton of strategist Carla Rossi, who in the absence of gunpowder, without weight forwards, has made defense their best weapon … Fortunately, the Federation did not invent a play-off for them.

Tri’s test against South Korea left a bittersweet taste due to the fact that Mexico does not progress, it wastes countless occasions against the rival frame, to top it off the defense looked too fragile and the rival had enough quick off-hooks to do damage. There is always the sin of overvaluing certain players, of placing excessive hopes on a few elements.

Jesús Corona, Hirving Lozano and Raúl Jiménez are exciting because they stand out in their respective clubs, but in the face of South Korea hit by Covid, they got Messi syndrome – one thing is the everyday team and another is their selection. They failed until they were tired and inspired countless memes because it is better to laugh than cry. Tomorrow against Japan they will have the opportunity to recapitalize their bonds.

In recent weeks, the Tigres fans have condemned the tasteless game of their team and strategist Ricardo Ferretti on social networks, who has just been renewed by the board headed by Alejandro Rodríguez. It is a squad that dominates the final phase, however, it seems that their players have run out of hunger, they are too well paid. They are favorites in the play-off against the Devils and will almost certainly reach the quarterfinals, but for what?

Puebla did more than expected, however, today it looks like a prey like Monterrey, which is ready to defend its scepter. The Chivas-Necaxa and Santos-Pachuca crosses appear more level. All kinds of miracles hang on Eduardo Chofis López, they say well: create fame … Mutual favor was done by the Under-23 and Cruz Azul in a rehearsal match that the cement producers won.