Today officially begins a five-year investigation to map the universe and reveal the mysteries of dark energy with the Spectroscopic Instrument for Dark Energy (DESI, for its acronym in English). Located in the Kitt Peak National Observatory (Tucson, Arizona, United States), will capture and study the light of some 30 million galaxies and other distant objects in the universe.

The recording of this light will help the scientists of the DESI project to build a map of the universe in 3D with unprecedented detail. The data will allow them to better understand the repulsive force of gravity associated with the dark energy that produces the acceleration of the expansion of the universe to enormous cosmic distances.

“DESI will allow us to see about ten times more galaxies than previous maps and study the evolution of the universe from 11 billion years ago to the present,” he explains Hector Gil Marin, researcher at the Institute of Cosmos Sciences of the University of Barcelona (ICCUB) and the Institut d’Estudis Espacials de Catalunya (IEEC), who co-directs the first analysis of galaxy maps.

The DESI telescope collects light, or spectra, from galaxies and quasars, allowing us to measure their rate of recession. “We know that the further the object is from us, the greater its recession speed, which allows us to build a 3D map of the universe,” says Gil Marín.

“DESI is the pioneering instrument of a new generation of international projects that will study dark energy from different angles”, he highlights Andreu Font Ribera, a cosmologist from the Institut de Física d’Altes Energies (IFAE) who co-directs the first analysis of the most distant quasars.

DESI will address two main questions: what is dark energy and what is the degree to which gravity follows the laws of general relativity

The researcher adds that the scientific program will allow two main questions to be addressed with precision: what is dark energy and what is the degree to which gravity follows the laws of general relativity. These laws form the basis of our understanding of the cosmos.

“It has taken us ten years of effort to go from the design of the instrument to this moment in which DESI begins to collect data that will revolutionize our understanding of the universe,” he stresses. Violeta González Pérez, a scientist at the Autonomous University of Madrid and one of the coordinators of the development of computational catalogs of the DESI galaxies.

Promising start for a pioneering instrument

The formal initiation of DESI mapping comes after a four-month test period, during which the instrument has measured 4 million spectra of galaxies, more than the sum of all previous spectroscopic maps.

DESI is installed on the refurbished 4-meter Nicholas U. Mayall telescope at the Kitt Peak Observatory, owned by the US National Science Foundation and managed by NOIRLab. It includes a novel optics, which increases its field of vision, and 5,000 robotically controlled optical fibers, capable of simultaneously measuring the spectroscopic data of as many astronomical objects.

This instrument can simultaneously detect light from 5,000 different objects and obtain their spectra in just 20 minutes.

“What is special about DESI is not so much the telescope as the instrument,” he says. Otger Ballester, an IFAE engineer who has been part of the team that developed the guidance, focus and alignment cameras for DESI, one of the Spanish contributions to the project. In fact, the instrument “can simultaneously detect light from 5,000 different objects and obtain their spectra in just 20 minutes.”

As the telescope moves, the optical fibers are aligned to collect the light from the galaxies reflected in the mirror of the telescope. From there, the light is led to a bank of spectrographs and CCD cameras for further processing and study. On a good night, DESI can record spectra of about 150,000 objects.

“DESI’s outstanding ability to collect spectra is also due to the instrument’s software,” says Santiago Serrano, engineer at the Institute of Space Sciences (ICE, CSIC) and the Institut d’Estudis Espacials de Catalunya (IEEC) who has developed part of the algorithms needed to guide the telescope. 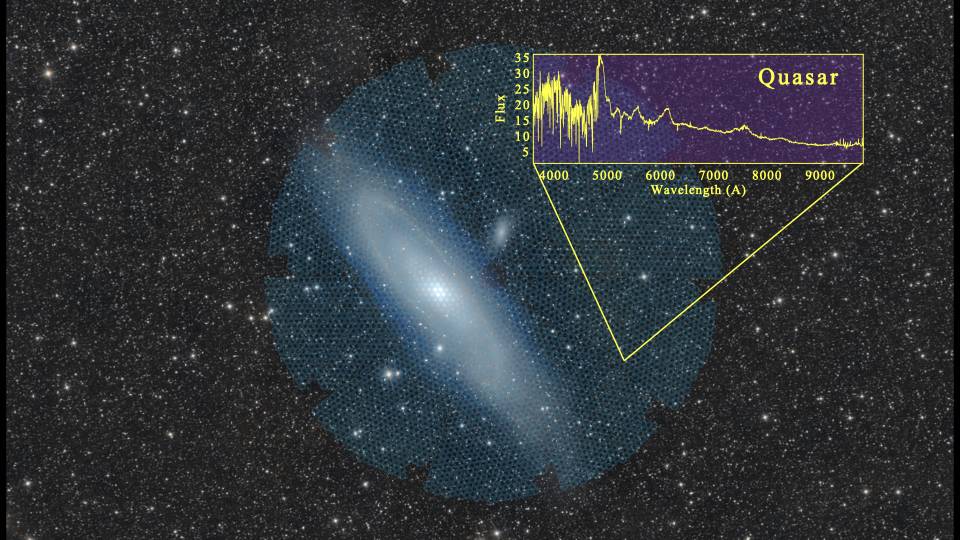 The DESI instrument, represented by the pale green circular surface superimposed on the image of the Andromeda galaxy (M31), which covers a portion of more than 3 degrees of sky. The small circles, within DESI’s circular surface, represent the regions of sky accessible by each of the 5,000 robotic fiber positioners. In this sample the 5,000 spectra collected by DESI simultaneously include, in addition to the stars belonging to the Andromeda galaxy, distant galaxies and quasars. The spectrum represented in the image corresponds to a distant quasar with an age of 11 billion years. / DESI and Legacy Imaging Surveys collaboration)

The spectra measured by DESI are analogous to the colors of the rainbow. Its characteristics, which include wavelength, provide information such as the chemical composition of the observed astronomical objects, their distance, and their relative speed.

The more distant the galaxy is, the greater the redshift of its spectrum, and to measure it, DESI will allow to create a 3D map of the universe

To the extent that universe expands, the galaxies move away from each other and their light travels to longer, redder wavelengths. The more distant the galaxy is, the greater the redshift of its spectrum. By measuring it, DESI researchers will create a 3D map of the universe. This detailed map of galaxies is expected to provide new insights into the influence and nature of dark energy.

“Unraveling the properties of the mysterious dark energy is the main objective of DESI,” he insists. Green Lycia, ICREA professor at ICCUB. “We know that currently 70% of the energy content of the universe is made up of dark energy, but we know very little about its properties.”

This energy determines the expansion rate of the universe, explains Verde. As the DESI instrument looks out into space and time, he says, “we can simultaneously observe the universe at different times and, by comparing them, discover how the energy content evolves as the universe ages.”

The scientists in this international collaboration are honored to be allowed to conduct astronomical research at Lolkam Du’a (Kitt Peak, Arizona), a mountain of particular significance to the Tohono O’odham Nation.