ASO has published the list of entries for the Dakar 2021 for the categories of cars, ‘Side by Side’ and trucks. In this regard, a total of 70 cars, 38 light UTVs and 35 trucks will be at the start of the 43rd edition of the toughest rally-raid in the world. As already happened in the categories of motorcycles and quads, the number of participants has been seriously reduced in this Dakar due to the effects of the economic crisis associated with the COVID-19 pandemic. In fact, Several of the pilots and co-drivers that are part of the ‘Spanish armada’ in the Dakar will not compete this year in the event.

The car category will have a total of 70 registered, led by Carlos Sainz with the number # 300 as the current winner. The Madrid driver and Lucas Cruz will have as great rivals Nasser Al-Attiyah, Stéphane Peterhansel, Yazeed Al-Rajhi, Giniel de Villiers -with Álex Haro as co-driver- and Sébastien Loeb. As for the ‘Spanish army’ in this edition of the Dakar it will have seven members. In addition to Carlos Sainz (# 300), they will compete in Saudi Arabia Nani Roma (# 311), Isidre Esteve (# 327), Manuel Plaza (# 349), Borja Rodríguez (# 363), Miguel Bravo (# 366) and Joan Font (# 368). However, the absence of names such as Xavi Foj, Cristina Gutiérrez, Óscar Fuertes and Jesús Calleja is noticeable, at least for now. 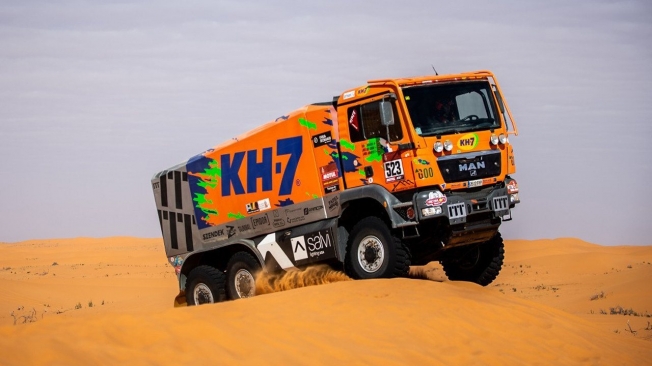 Jordi Juvanteny’s truck will once again be one of the protagonists of the Dakar 2021.

By last, the truck category will consist of 35 vehicles, being KAMAZ the great rival to beat. The losses of Gerard De Rooy or Albert Llovera have largely spoiled the duel of the ‘desert elephants’, since IVECO will not have representation of guarantees. In this regard, the Spanish representation within the category is quite small and is limited to Alberto Herrero, Juan Carlos and Nuno Fojo (# 521), Javier Jacoste, Francesc Ester and José Rosa (# 524), Jordi Juvanteny, Jorge Ballbe and José Luis Criado (# 526) and finally Jordi Esteve, Julio Romeo and Enric Martí (# 543).