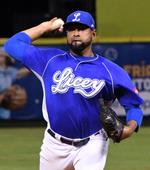 Covid-19 took over the stage just five days after the Dominican Republic Professional Baseball Tournament began, after the confirmation that ten members of the Tigres del Licey and three of the Gigantes del Cibao are infected with coronavirus.

Five Tigres players tested positive in the shots that were made last Wednesday, which triggered the alarms of Public Health and its vice minister Edward Guzmán, in charge of applying the sanitary protocol of the championship.

That ministry decided to repeat the tests on Thursday to everyone in the team and another five were detected, four players and, presumably, the manager Luis Sojo.

“We have ten positive cases in the team in 48 hours,” stated Dr. Guzmán in an interview with the radio program Grandes en Los Deportes, produced by the chroniclers Enrique Rojas and Dionisio Soldevila.

He explained that when in that period of time the number of infected in a group is seven or more among those who are on a day-to-day basis, such as players and coaches, the protocol establishes that it must recess for three games.

Regarding the Giants, Dr. Guzmán said that the three infected, whom he did not identify, were detected last Monday and that new tests were going to be carried out yesterday because the follow-up must be activated.

He assured that both the members of the Licey and those of the Giants were infected before last Sunday, the date on which the championship was inaugurated.

The medical professional argued that the coronavirus is not detectable before five days, as evidenced by the fact that all had previously been tested and were negative.

He also declared that in the next few hours Public Health and Lidom will release the official report on the situation.

Regarding the eagles, he pointed out that they had a positive case, but of a player who did not get to report.

The Deputy Minister of Public Health said that what happened was planned, as happened last season in the Majors and in the different European football leagues, so it is necessary to remain calm.

“It’s a time to keep your cool. I say this in a generalized way. With the teams we are making recommendations for the use of masks, distancing, sanitation, awareness and we believe that in all teams the players are doing their part ”, he stressed.

“It is an issue that there was a probability of happening. It has happened in other leagues and we continue to monitor it day by day and with God ahead of us we are confident that in the end, in January, we will have a champion, ”said the doctor.

In similar terms, Dr. Waldo Ariel Suero, president of the Dominican Medical College, referred to this outbreak that has broken into the local autumn-winter circuit, who advised to remain attached to the health protocol to prevent the spread of Covid-19.

“We advise that the protocol of distancing, use of a mask, sanitation and distancing be applied among all those involved in the tournament. That is what is imposed, “said Dr. Ariel Suero in a telephone conversation LISTÍN DIARIO.

“The Giants are going to move forward, here everything is controlled, although we have had eight cumulative cases, which include clubhouse personnel, technicians or the press department, it has not only been the players,” said its manager Jesús Mejía.

“The Águilas Cibaeñas team categorically denies that eight of its players are affected by Covid-19, as the rumor has been placed on social networks today,” says a statement from Santiago’s yellow ninth.