In addition to the calamity for the majority of Venezuelan immigrants residing in New York having fled a dire humanitarian crisis, the closure of the consular headquarters of that country in Manhattan entails another dramatic stumbling block for a community that in the last five years, in an ascending way, has more presence in every corner of the Big Apple.

Technically and legally a group of Venezuelans “does not exist”, or at least, they do not have valid proof to certify their existence.

Since March 2019, these South Americans constitute the only Hispanics in New York City who have completely closed the door to a series of consular procedures, which among other aspects, prevents them from renewing or extending passports, a key support for a foreigner to be able to prove their nationality and identity.

Everything is complicated when this ‘little book’ is not at hand and is also in a migration regularization process.

In a recent informal survey on social networks, carried out by the portal Venezuelan in New York, 80% of the 142 comments are linked to complaints about the inability to obtain driver’s licenses, open bank accounts and basic actions to “survive”.

15% of the remaining group shared claims of how he was “scammed”, when trying to carry out procedures in that instance before March 19, 2019, at which time many celebrated that that headquarters in New York, cataloged as the “Jewel in the crown” of Venezuelan diplomacy, passed into the hands of the government of Juan Guaidó who was recognized by the United States as interim president.

But the emotion of these citizens did not last long.

Beyond the act of “symbolic seizure” of the consular building located next to the St. Patrick’s Cathedral on Fifth Avenue in Manhattan and the “expulsion” of the diplomatic staff of Nicolás Maduro, considered by the Trump Administration as a “usurper of power”, from that moment on, the facility is closed, without visible officials and without any concrete use for Venezuelans. 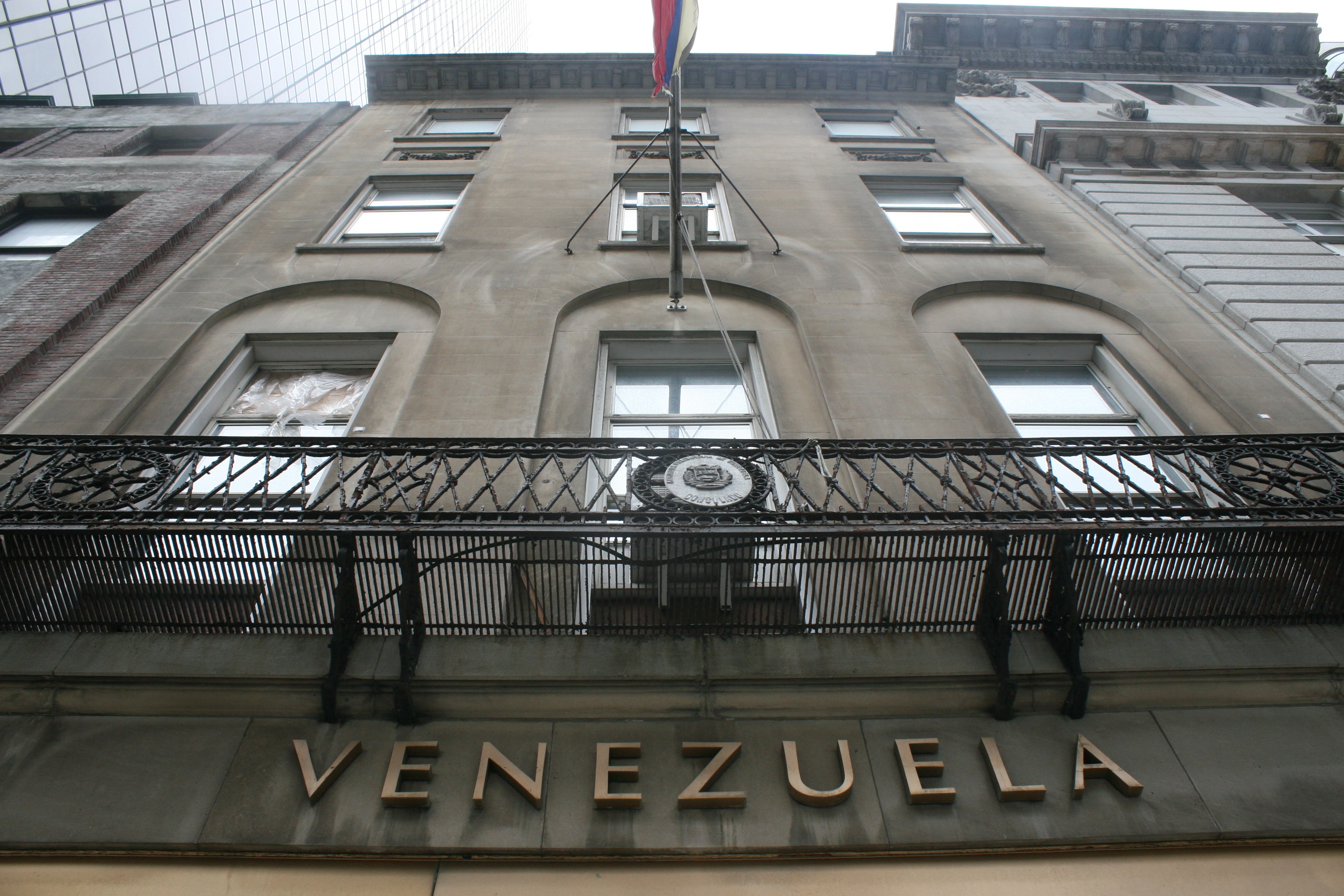 There are no services available in the Venezuelan Consulate building in Manhattan since March 2019. (Photo: F. Martínez)

This is how the activist Robert González, president of the organization ‘Dialogue for Venezuela ‘, Receiver of complaints that depict how this “consular limbo” has added “consequences that defy description” by denying this group the human right of identification.

“In summary, as we say in Creole, the remedy was worse than the disease. Our community feels helpless and also betrayed. Not that before we had exemplary consular services in the hands of the usurper government. But now it’s the politics of silence. It is a useless site that is generating costs for the country, ”González said.

Given the technical and operational impossibility shown by the interim government of Venezuela to issue documents, since last May 21, 2019, it was agreed with the countries that recognize the Guaidó government that expired Venezuelan passports automatically have a five-year extension, from the original expiration date or its extension. Without the need for any additional procedure.

This decree of “relief” has been for the majority of the consulted Venezuelans, who live in the tri-state area of ​​New York, New Jersey and Connecticut, a dead letter. Particularly for those who lost their document, as it is impossible in this situation to access the municipal identification program of the Mayor’s Office called ID NYC let alone trying to get the new “Driver’s Licenses for All” approved by New York State last year. 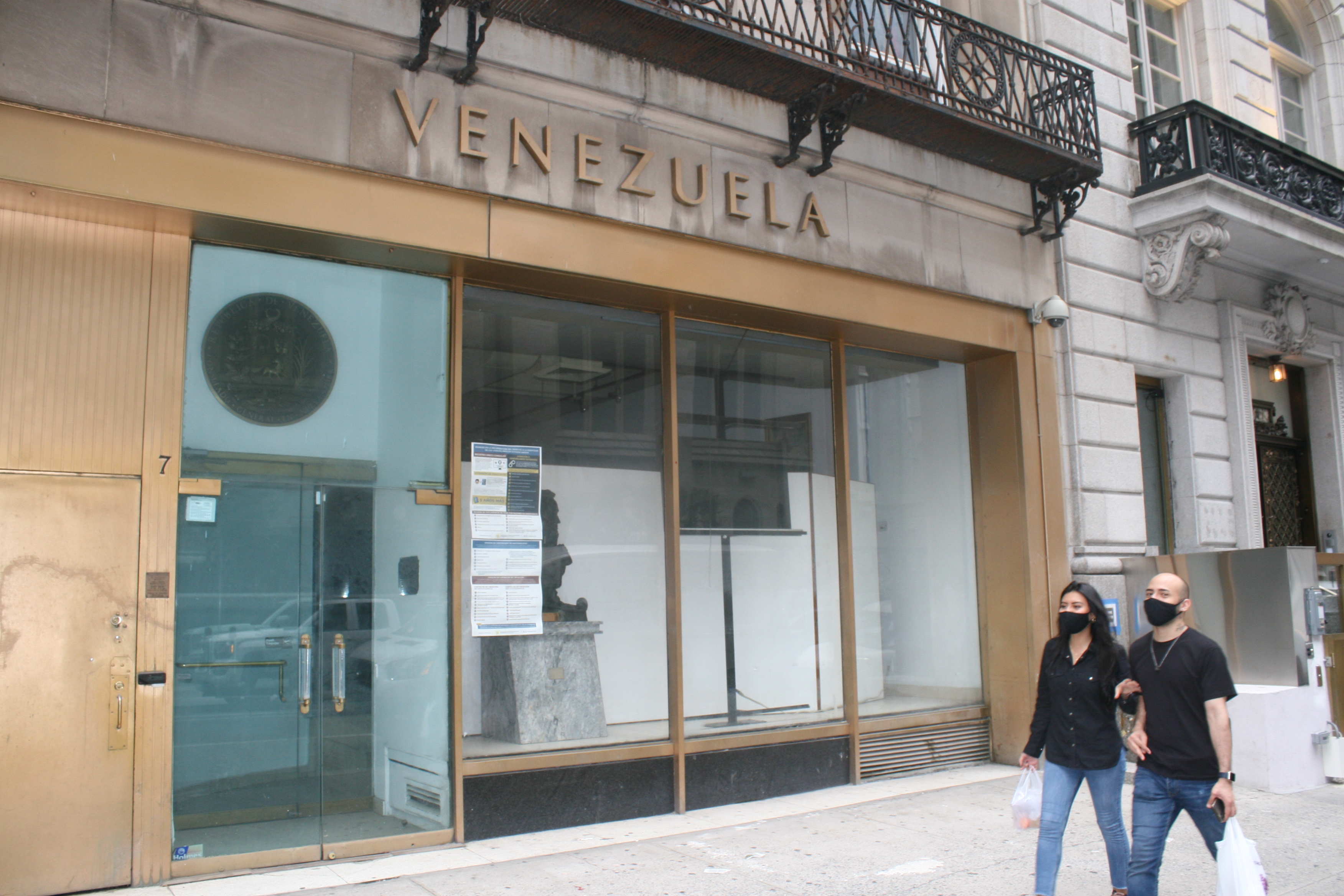 The Venezuelan consular headquarters in Manhattan that serves the tri-state area is a “dead letter” for this growing immigrant community. (Photo: F. Martínez)

What if you lost your passport?

The Caracas immigrant Josefina Gago For three years she lost her passport, a fact that, as she defines it, “upset her whole life.”

“The political disaster in Venezuela haunts you wherever you are. I lost the document and to process it, before the interim government, they were charging me $ 1,500. When Guaidó supposedly assumed control, I was filled with hope. But now, it’s worse. They can’t do anything”, Shares the immigrant.

The activist Robert González explains that even with the “automatic extension” Hundreds of his compatriots are detained at airports with an expired passport, unable to open bank accounts and even have obstacles to enroll in certain educational centers.

“We live the painful experience of Venezuelans who died of COVID-19 in New York and the way to process the death letter was totally closed. Not to mention any policy for those affected by the pandemic, ”shared González.

Stories abound on the edge of despair. The Venezuelan Wendy Arias reported on social networks that in February 2018 he paid the office of the Venezuelan Identification Service (SAIME) for an online appointment to renew your passport in New York. The appointment never came. Then in October he asked for an extension because there was no material to broadcast them.

“I entered SAIME again, paid my extension and in January it was Guaidó’s issue. They closed everything here and I was without my extension. Scammed ‘legally’. The irony is that I never wanted to look for a manager for the process because it seemed absurd and very expensive. Now I regret not having done it. Maybe I would have my passport and I wouldn’t be without an identity, “he said. 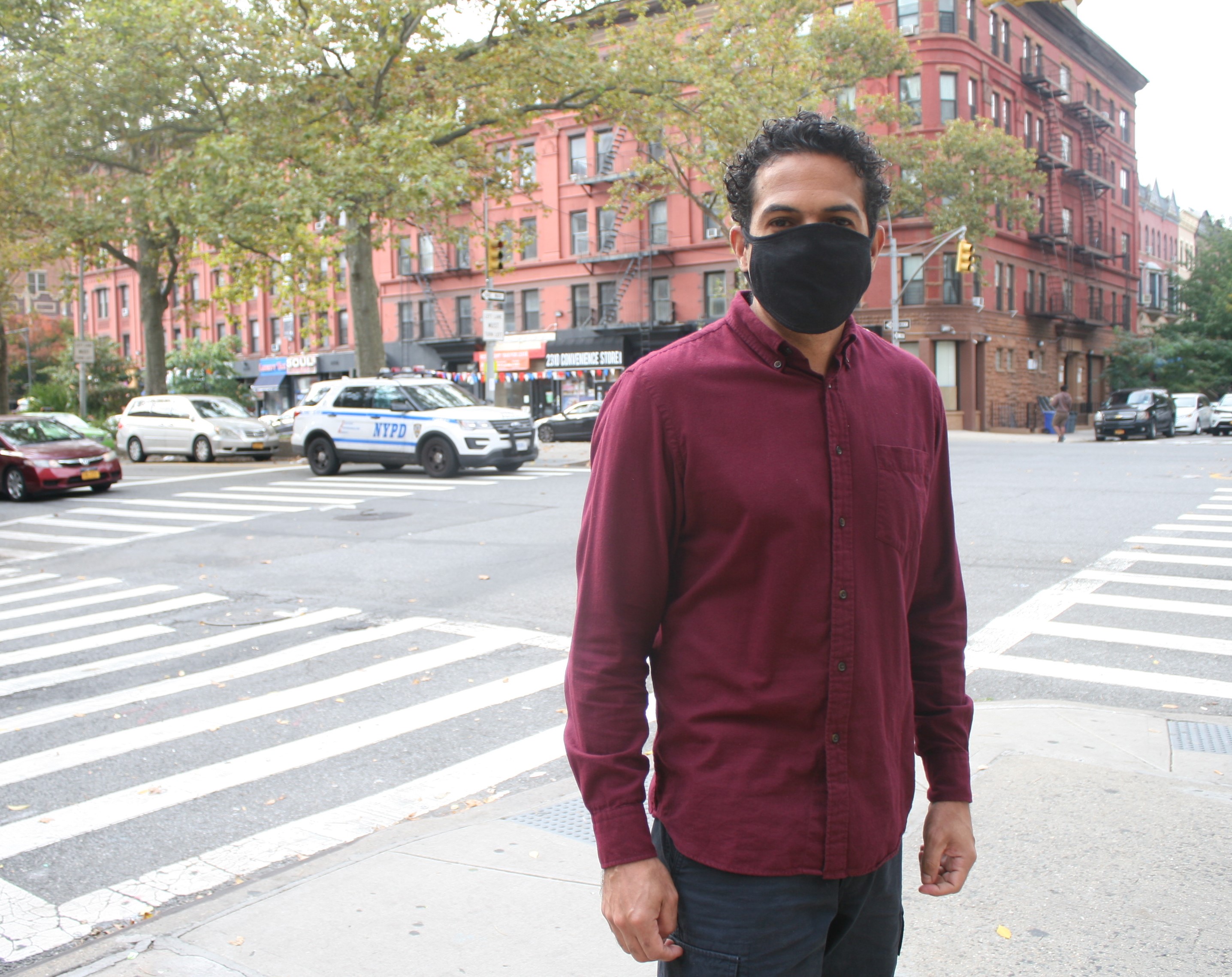 Venezuelan Héctor Arguinzones, founder of VIA, refers to the devastating effects of this “consular limbo” on his compatriots. (Photo: F. Martínez)

“They deny us existence”

Hector Arguinzones, founder of the coalition ‘Venezuelan and Immigrants Aid’ (VIA), that for four years has offered support to immigrants from that South American country in New York City, also has a clear balance on the effect that this situation brings to its compatriots.

“This year has been the most difficult for our community due to COVID-19. It is painful to see how many are trying to regularize their immigration status and a valid ID is the first step to take any path. It’s like practically denying you existence”, He reasoned.

The VIA activist reports that he observes cases of people who, in the midst of how complicated immigration policies can be, are practically “locked in here”, because even if they have the alternative to go to a third country, cannot leave because they lack any recognized certification that demonstrates where they were born and what are their names

Likewise, Niurka Meléndez is also the leader of the VIA organization and specifies that daily “he perceives and suffers the abandonment” of the consular authorities of his country, in a community that mostly live in the challenge of being part of a forced immigration process.

“Hundreds of people who escaped have been denied this right for a long time. of the criminal regime of Nicolás Maduro. In addition to the humanitarian crisis. Somehow, this consular orphan or lack of information, puts us in a more delicate situation. It is an additional suffocation for those of us who decide to go out looking for safety ”, he said. 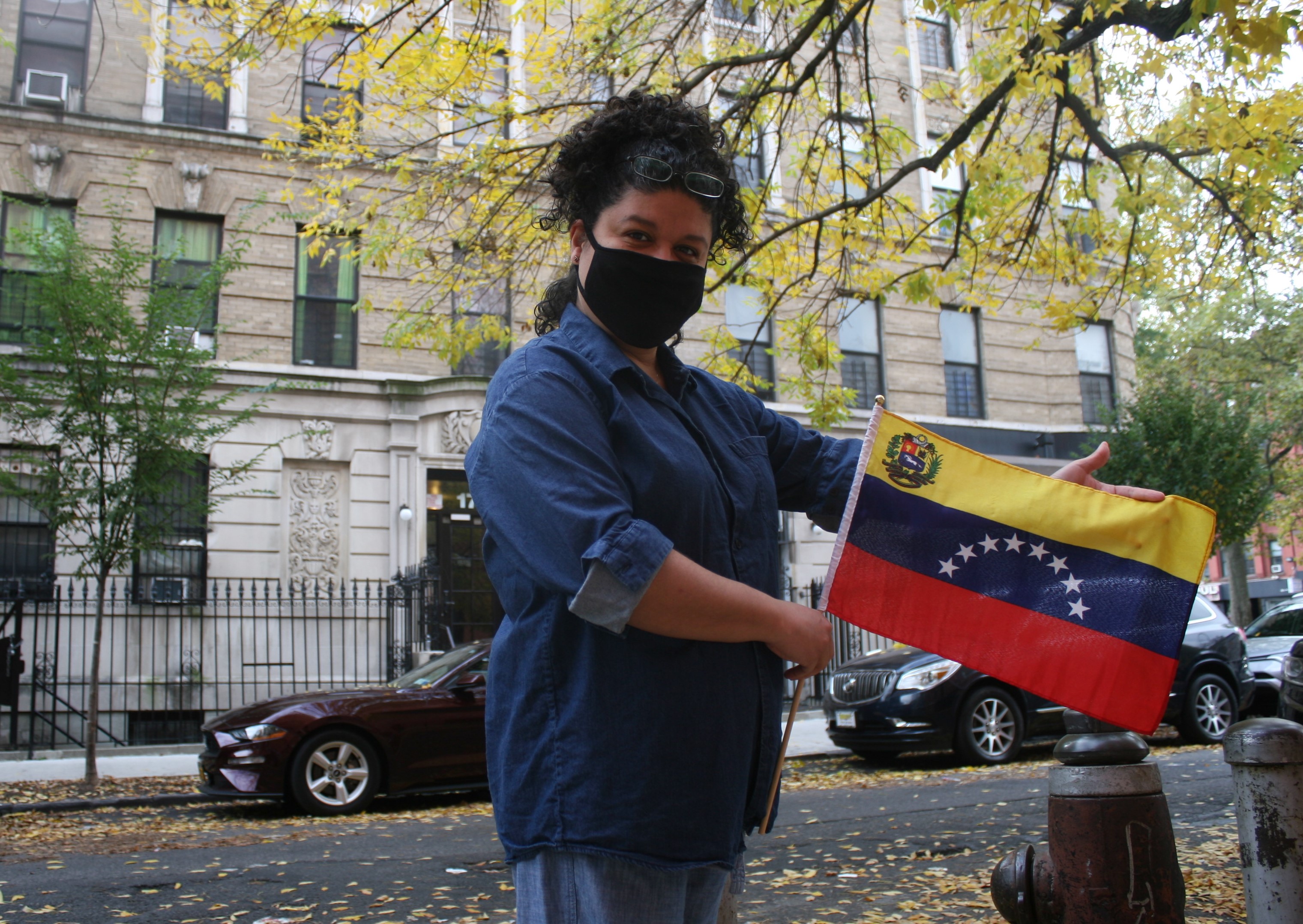 The analyst and author of books related to the Venezuelan diaspora, Angel Arellano, who is also editor of Dialogopolitico.org, assures that since 2012 all Venezuelans in the world face great problems in obtaining identification. In the midst of the largest human migratory movement after Syria, a situation without precedent in Latin America.

The Director of Consular Affairs from the Venezuelan Embassy in the United States, Brian Fincheltub, exposed to The newspaper that at present, several consular services are “available”, albeit remotely, due to the pandemic.

“For our team the consular headquarters in New York represents a great advantage. It is our own building and when we can fully reactivate the services, everything will be much easier there. In the rest of the country, the regime left very large debts with the rent of spaces, “said the official.

Faced with the great question about the possibility that the Venezuelan community residing in the Big Apple and the tri-state area could have key services such as issuance and renewal of documents, he specified that in the short term there are no lights for that possibility.

“Beyond the consulates, this operationally depends on SAIME, which it is not in our hands. Since long before the start of the interim government, neither the document nor the extensions were being processed in New York. There existed a great corruption scheme. We have complaints of people who paid large sums of money for procedures and were scammed, ”said Fincheltub.

The diplomatic spokesman recalled that they have traced a route that began with Decree 006 for the automatic extension of five years of expired passports.

“Our equipment is available 24 hours a day, through digital tools, to solve problems for our citizens before instances that do not accept the automatic extension. In this case, a certificate of nationality is issued. There is also the availability of the ‘National Travel’ certificates which is an emergency document for travel back to Venezuela, through a third country “Fincheltub reported. 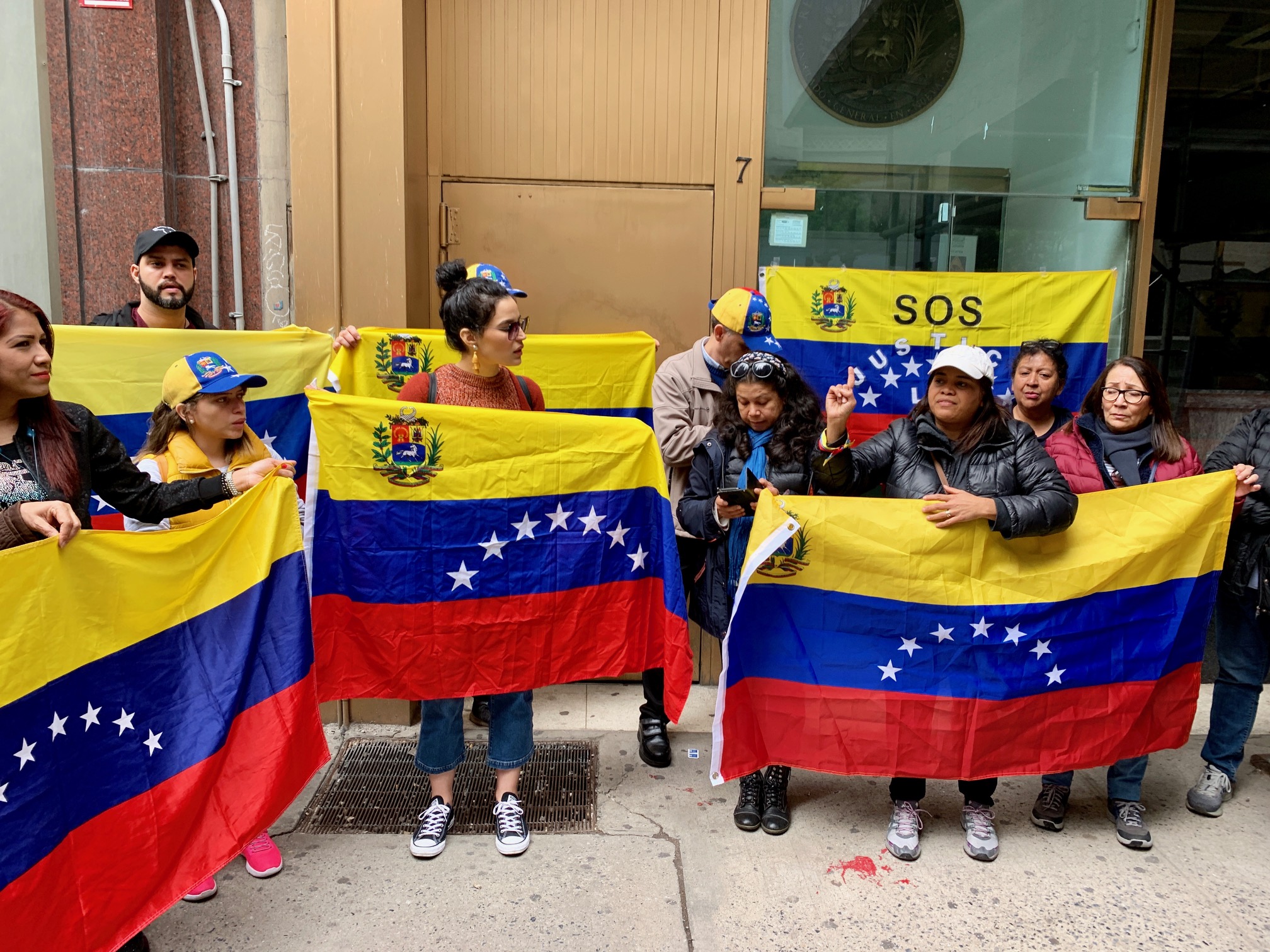 Not infrequently, Venezuelans have taken the headquarters of their consulate in NYC to protest the crisis in their country. (Photo: Ramón Frisneda)

How to make inquiries?

servicesconsulares@us.embajadavenezuela.org It is the official email of the Venezuelan embassy in the United States, where you can report your problems with the automatic extension of the passport. All the information regarding how to access consular services available on the website us.embajadavenezuela.org.

15,000 Venezuelans they live in the Big Apple according to unofficial estimates. To date, there are no precise census data on this immigrant community.
40,000 Venezuelans in upstate New York. This is also an approximate figure.
3 states of the country They concentrate the largest number of immigrants from the oil country, New York is the third after Florida and Texas.