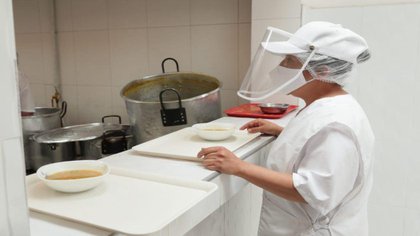 In order to continue with community kitchens without the capital’s risk of contagion, the Social Integration Secretariat announced through its social networks that a transformation process is currently underway in these places, distributed in the towns of Bogotá.

Xina Rocío Navarro, head of this portfolio, explained, through a video, three important points about how the changes in the service of community kitchens are being carried out.

“First, community canteens are not closed, they are transformed into popular kitchen canteens, which allow us to have biosecurity measures to face the emergency produced by covid-19 ”, explained the Secretary of Social Integration.

Regarding the operators of the establishments, the official indicated that, “The current operators who are in the community kitchens can present themselves to the selection process that we are a few days away from updating it through the legal mechanisms that exist.”

The third clarification made by the head of the social entity was that “No person or beneficiary is going to be affected, on the contrary, this modality will allow us to expand coverage without sacrificing the biosecurity measures required by the health system”, he pointed out.

In this way, according to El Espectador, the idea is that the beneficiaries come to the places where the dining rooms will be to receive food aid in their personal container. Once they have it, they should go to another place to consume it and thus avoid crowds. 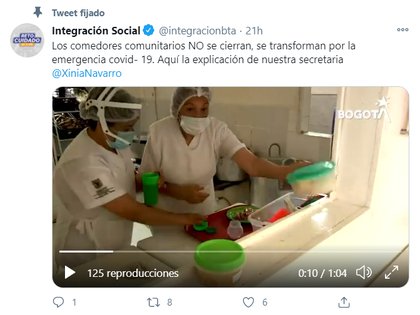 Likewise, the national newspaper pointed out that the intention is that in addition to the dining rooms, the District officials can expand their route to “provide food aid to people as far as they are located, because there are many citizens who are not close to the operating units ”.

In a statement, the entity said that since the pandemic began, “the District Secretariat for Social Integration has not stopped providing comprehensive and quality care in each of the services they provide.” Due to this health emergency, the transformations carried out in different operating units are aimed at continuing to provide an excellent service in favor of users.

It should be noted that, another of the goals of the mayor’s office, through the Secretariat of Social Integration to guarantee that no person is left without food, is that the opening hours are extended, which go from 11:00 am to 3:00 pm

With the aim of socializing the information, the Secretariat plans, through the local Sub-directorates and the Nutrition and Supply Directorate, to initiate dialogues with the operators, the participants and the different actors related to the transformation that is being carried out in order to know in detail concerns and decant the information.

Likewise, this social service has already been transforming, guaranteeing the right to food and food security from modalities such as domiciliary and delivery to the beneficiary in a container, adapting to the social and health emergency due to covid-19.

Mobilization for changes in dining rooms

Hours after the secretary Ximena Navarro announced that these establishments will now be dining rooms, popular kitchens, El Espectador announced that a call made by the beneficiaries of these places was known to hold a demonstration on February 1.

“According to the people who summon it, the meeting point would be at 10:00 am in the Plaza del Concejo de Bogotá, then they would go to the Mayor’s Office in a peaceful manner,” confirmed the media.

Óscar Riveros, a resident of the Estrella del Sur neighborhood, in Ciudad Bolívar, is one of the Bogota citizens who have been affected by the closures of these establishments and is leading the mobilization. In dialogue with El Espectador, Riveros stated that “the mayor of Bogotá, Claudia López and the secretary of Social Integration, Xinia Navarro, decided to close 125 community dining rooms in the middle of the pandemic and, part of that, they lock us up with strict quarantines. There are 34,178 people who benefit from this food in Bogotá ”.

Learn about the channels for the beneficiaries of basic income to receive the monetary transfer.

“The authorities will have to help me purge the Attorney General’s Office”: Margarita Cabello.