Barça achieved the long-awaited pass to the Final Four after beating Zenit (79-53) in the best match of the quarter series. An aggressive Barça in defense, dominating the area with Davies and a great Gasol, and with the offensive success that was lacking in the previous games, it allowed him to add the most comfortable victory of the series and the ticket for the Final Four in Cologne, from April 28 to 20.

The final duel was presented with the same characteristics of the previous four. Stopping Pangos was key for Barça, and Calathes’ initial defense, with the help of his teammates, began to pay off.

The point guard did not find his teammates so easily, and Barça, the fruit of great defense. He put a lot of pressure on the Zenit attack, with many problems. But that better defensive disposition of Barça, and defensive rebound, also translated into a better attack.

And Barça managed to circulate the ball, and found Higgins to give the first advantages (19-11), which was followed by some great minutes by Brandon Davies, who took control of the area, remembering the player from the first two games, to give Barça their maximum income at the end of the quarter (23-14).

Barça came out with that aggressive mentality, and Bolmaro gave the first big boost to his team with five consecutive points, including a triple (28-16). Barça felt comfortable and dominated the rhythm of the game.

Even Pau Gasol contributed some good minutes in the fourth, with three ball steals, a block and five points that gave Barça the maximum income (36-20) and that he would repeat shortly after after Kuric’s triple, another of the successful attackers (41-25). 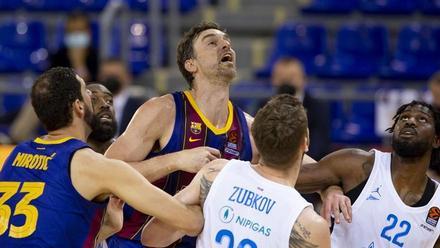 Pau Gasol played the best game of the series against Zenit

Although Zenit, far from surrendering, He tried to hold on to the game with Poythress and Pangos, preventing the half-time rent from being unattainable for them (43-30). The match it was in the hands of those of Jasikevicius, but the task was to finish it off after the break.

Barça came out with the same determination, aggressive in defense, without letting Zenit breathe, which could not find the way to the basket. But if Barça did it, first with good deeds from Calathes, and again, Davis, to give Barça an income of 17 (51-34), the highest in the entire series.

Zenit was unable to score, with Gasol blocking who was approaching in the area (4), while the Catalans saw hoops with triples from Calathes and Kuric that opened the difference to no less than 23 points at the end of the room57-34). An insurmountable difference for the Russians and that brought Barça closer to Cologne.

There was no reaction from Pascual’s team, very worn throughout the series, and without the success of interior matches, he lowered his arms long before the end against a Barça that reminded the dominating team of the regular season. The same one that must be planted in Cologne to win the third Final Four