The long exposure in photography gives a lot of play. In fact, it is a function that has gone in recent years from requiring a tripod and a lot of patience to being a common function on mobile phones. But there are still disciplines that are based on long exposure and have an air of yesteryear, as with the solarigraphy.

Currently, solarigraphy is a discipline that combines the use of pinhole cameras, photographic paper and includes network broadcasting, making it a more retro look combo and something that is almost a must nowadays. Your birth [se sitúa](http://www.solarigrafia.com/solarigrafiasolarigraphy/IntroduccionSolarigrafia.html around the 2000s and since then we have been able to see many examples.

Stelae that are a trace of months

How could it be otherwise, our particular photography bible (Engadget Foto) helps us to know this practice, which as we say is about 20 years old (it is two decades, yes, but photography is more than a century old, so neither it is very old). As described in that publication, the solarigraphs record the movement of the Earth relative to the Sun, something that as a result gives a strange composition in which parallel and fluorescent trails appear.

In fact, it is interesting to read the interview with Diego López Calvín, one of the inventors of the term “solarigraphy” to name the images produced in his Solaris Project, along with Slawomir Decyk and Pawel Kula (which would be shown at the Skoki Photography festival 2003), as explained in Solarigrafia.com.

There López Calvín describes that in a solarigraphy the image appears by direct blackening due to the sensitivity of photographic paper. In this case, although we are talking about paper, it is not revealed or fixed, there is no moment of a dark room with red light and laying of photos. 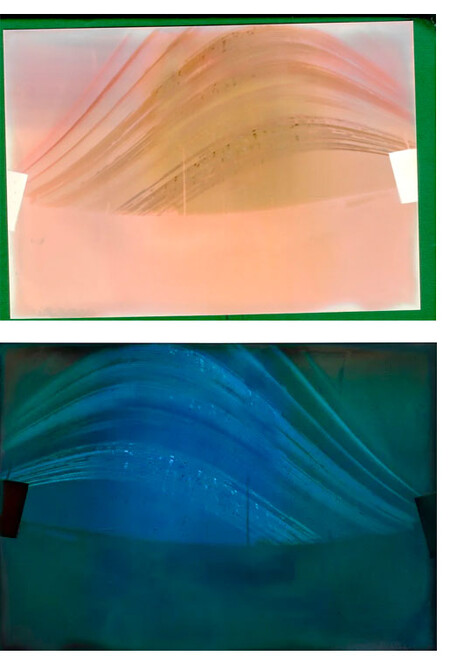 IN Instrcuctables, Cartermarquis recounts his experience step by step. In the end, in the part of what would be the development, he emphasizes that the paper can be taken out of the camera in a bright room and that when trying to fix the photo he obtained a negative with less contrast, so he discourages it. Here we see the before and after (of scanning and digital processing) of solarigraphy.

What we see in these photographs is the footprint that the Sun leaves when passing through the sky, which may remind us of the trails of light that we get with a classic long exposure photograph (for example, if we let the camera expose a few seconds to a road with traffic at night or in the dark). The difference is that in this case will require an exposure of days or even months. That is, if you are one of those who is impatient with the bulb mode of the cameras, this is not for you.

In this way, what we observe in a solarigraphy, especially in one of those that comes out for a long exposure time, are the steps of the Sun arranged temporally from top to bottom. They are images that provide information about the position of the Sun on the horizon and depict it in a rather unique way.

The good news is that it requires a pinhole camera, or what is the same, a camera without a lens. You may have made some at school or in a children’s workshop, since it consists of a light-tight box with only a small hole through which light enters (the pinhole), and a photosensitive material (paper). There are multiple examples of DIY pinhole cameras on YouTube, from the simplest with a can to more elaborate ones, like the one shown at Domestika.

Finished my first solargraphs! ☀️ Solargraphs are long-exposure pinhole photographs that capture the daily path of the sun, and these ones show winter solstice last December to summer solstice yesterday. Sunny days are solid lines, and cloudy periods are the gaps between them 🌥 pic.twitter.com/LXxPIyzozr

The photosensitive material must be black and white photographic paper. The modern part? That of to share, which also implies that the paper with the stamp is scanned and processed with an image treatment program to obtain the digital file.

A cheap type of photography, but only suitable for patient photographers

To make solarographs it should be borne in mind that the more exposure, the better, as we have said before. Therefore, it will be convenient that our pinhole camera not be something very valuable and that it can be placed in a moderately protected place, that allows us to go from time to time to monitor it and is not too exposed to wind or agents that can spoil the result.

As to the recommended periods, we can find recommendations about the time between an equinox and a solstice, (that is, between the day in which the hours of light and the night are the same and the day in which the hours of sunshine are the maximum in the year), although it is usually recommended to take the time between two solstices (longer). And for those who want to go further in experimentation, they can try to capture the analema (the curve that describes the position of the Sun in the sky if every day of the year is observed at the same time of day), although this usually requires more skill and some added mechanism.