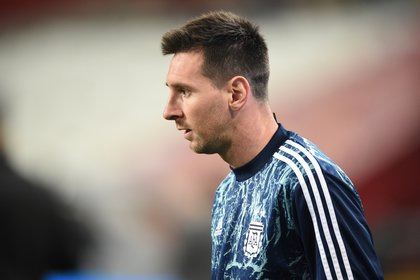 Messi, with the National Team clothing. Against Peru, in Lima, he had a very good performance and only missed the goal (Ernesto Benavides / Pool via REUTERS)

The 15 hours of flight always get long, but in this case, to Lionel messi and the teammates who also boarded their private plane to return to Europe, became more bearable, thanks to the great performance of Argentina in the 2-0 victory against Peru, by South American Qualifiers. However, when the aircraft landed at El Prat airport, he came across a Spanish Treasury operative.

In reality, according to the 33-year-old forward’s inner circle, it is common for the plane to go through a routine procedure every time it descends in Barcelona, ​​something to which the Albiceleste captain and the culé team are accustomed. This time, the peculiarity was that the work of the tax inspectors was more exhaustive, probably due to the fact that it had more passengers than in the usual crossings, from Leo’s gesture of offering his transport to the service of the national team.

The agents asked all the travelers, including the pilots, for their documentation and the aircraft’s papers. In addition, they conducted a questionnaire on the owner: the procedure took about 60 minutes. All after a long and exhausting transfer. But The sensation that remained in the surroundings of the star is that the Hacienda put on a show, taking advantage of the presence of a large journalistic guard to receive the attacker, Barcelona’s top scorer and a reference in the institution’s golden age.

It was there that, before the approach of the media, it was forceful. “I’m tired of always being the problem of everything at the club”He said about the criticism, which in Spain increased after the burofax episode, his decision to leave Barcelona, ​​appealing to the automatic exit clause that he had signed. However, the resigned president Josep Bartomeu tried to push him to court, a fact that Messi did not allow due to his link with the Blaugrana entity. Consequently, he chose to fulfill his contract, which expires on June 30, 2021.

And he finished, on the Treasury procedure: “I arrive after 15 hours of flight and I find myself there at one of the Treasury … It’s crazy”. It was that, the show, the real reason for his anger. After the bad moment, La Pulga seeks to focus on the next match that lies ahead: this Saturday Barcelona visit Atlético Madrid at the Wanda Metropolitano stadium, for the tenth date of the Spanish League. In front he will not have his friend Luis Suárez, who was infected with coronavirus in the Uruguay national team. And on Tuesday, those led by Ronald Koeman will play in Ukraine against Dynamo Kiev, for the Champions League.

Messi thinks about football, his passion, beyond the fact that in January he can fix his link with another institution as a free player. As reported by the British newspaper The Sun, the Citizens are totally determined to bet on Messi to reunite him again with the technical director Pep Guardiola (together they contributed in the most glorious stage of Barsa) and will seek to incorporate him into the January transfer market, without waiting to add it to zero cost. They would offer an amount less than 56 million euros.

At the same time, in Catalonia they dream that the new authorities (there are elections in January) can build a tempting project so that Messi has the resources to continue expanding his history and that of Barcelona, ​​as he did from the first day he he dressed as a blaugrana.

This is how Lionel Messi ended the match against Peru: the gesture that exposed his great sacrifice