For once, penalties were elusive last Thursday for an FC Barcelona forced to win this Sunday at 8:00 p.m. on the Levante UD track (Esport3, LaLigaSportsTV and GOL) to force a third game in the league final to be played next Wednesday at the Palau.

The opposite would mean for the granota to culminate a sensational campaign and add the first title in its history to the historic classification for a Champions League in which Barça will also be.

Thus, the club chaired by the media outlet Quico Catalán culminates his feat after playing the Europa League with the football section and qualifying for women’s football for the next Champions League.

The ‘ex’ of Barça

The ‘ex’ of Barça

As happened in the Palau, an important part of the leading role in the Levantine team will be carried out by their five former FC Barcelona players.

The Barcelona youth squad Roger serrano He exhibited his ‘magic’ with a great game and a sensational goal, while Esteban was a benchmark for the Valencian team and both Rafa Usín and Mario Rivillos and Marc Tolrà scored their penalties. 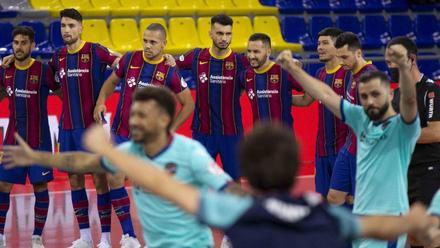 Levante won at the Palau on penalties

Diego Ríos, the youngest coach of the First Division, surprised the most veteran (Andreu Plaza) with his 1-2-1 defense to stop Dídac’s incursions and for sure that tonight’s game will be another game of chess on the benches.

At the conclusion of the first match, the club organized an act of recognition for the three players who will leave Barça at the end of the season. They will be the emblematic Aicardo, Ximbinha and Daniel Shiraishi, while both Andreu Plaza and his ‘second’ Miguel Andrés were already honored weeks ago (Joselito will also leave on loan to Real Betis).

As well, the objective of all of them is to win to be able to say goodbye in the best possible way with a title on Wednesday in Barcelona. The only Barça loss will be that of the long-term injured Sergio Lozano, although the Brazilian Dyego will play very “touched” again with serious ankle problems. 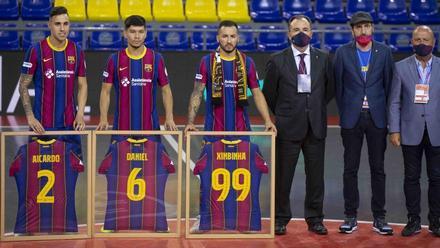 Levante won at the Palau on penalties

Andreu Plaza does not contemplate anything other than winning in Valencia, although he regretted that the team did not give everything in the first game. “After Ferrao’s goal and several saves by Fede, the first half was more or less wasted, losing pressure and identity,” explained the Barça coach.

“Time went by and we left half a game and in a final wasting a minute has consequences. Anyway, I have told my players that the track is still set up at the Palau, because there has to be one last game this wednesday. We will also need our individualities to come out & rdquor ;, said the man from Girona, who will lead his last match in the event of defeat.