While the decisive moment of the season arrives for Barça with the dispute of the Final Four and the Endesa League, in the offices they are already working to complete a template equally competitive for the next course.

And it is that the Barcelona squad He will experience some changes, especially in the direction of the team, although some changes in the position of power forward and in that of ‘center’ are not ruled out. All this is being worked out with meticulousness by the new general manager, Juan Carlos Navarro, and the coach himself, Saras Jasikevicius.

The priority right now is to enlist the services of a young 20-year-old Lithuanian guard, Rokas Jokubaitis., which Saras knows well, and wants him to be squire of Nick Calathes in the direction of Barça.

A player who fully supports the Barça coach, who knows his game perfectly and he believes that it can be very productive for Barça, albeit in the short term, because it may lead to the NBA in the next few years.

Barça negotiates the termination and the clause that will have to be paid to the Lithuanian club, that he is willing to negotiate with the player’s desire to dress as a Barça player.

Goodbye to Bolmaro and Westermann

Jokubaitis will come to cover the more than certain losses of Leandro Bolmaro, who goes to the NBA next season with Minnesota, and neither will Leo Westermann, who is not interested and that he might even enter the operation for Jokubaitis. 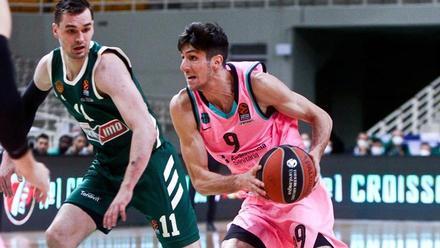 Bolmaro definitely leaves Barça, on the way to the NBA

Navarro has also tested the former Barça guard Kevin Pangos, who has impressed with his great season at Zenit, although its economic pretensions, with a great offer of renewal by Zenit, they practically keep him from going back to the Palau.

The entire outside line is assured of its continuation, with Mirotic at the head, although the Barça club could ask Alex Abrines an effort to reduce what it has agreed to in its expansion contract that triggers its record. Both parties will agree because the player is very happy at Barça and the club considers it a very important piece.

Finally, another who will pack his bags is Artem Pustovyi, who ends his contract and will not continue, after it became clear this season that it was not part of Jasikevicius’s plans, in addition to having a fairly high token.

Nor is Pau Gasol expected to do so, who arrived two months ago to get his set-up for the Games and contribute this season finale.. But he does not contemplate continuing if there is not a surprise after the Olympics.

On which doubts fall is the Valencian Victor Claver, who has one more year of contract Y Barça would welcome his departure, although the player has already made it clear that he has no intention of moving. We will see how the topic ends.