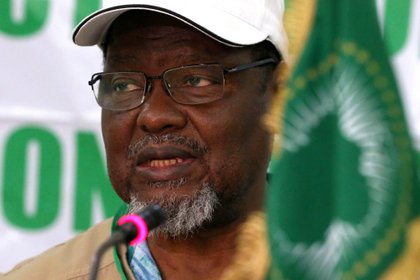 Johannesburg, Nov 21 . .- The African Union (AU) will send former presidents Joaquim Chissano (Mozambique), Ellen Johnson-Sirleaf (Liberia) and Kgalema Motlanthe (South Africa) to Addis Ababa to help mediate in the war they face to the Ethiopian Government and the rebel authorities of the northern region of Tigray.
“The main task of the special envoys is to involve all parties to the conflict with a view to ending hostilities,” said South Africa’s head of state, Cyril Ramaphosa, president of the AU at the end of Friday. .
The mediators will also try to “create the conditions for an inclusive national dialogue to resolve all the issues that led to the conflict and restore peace and stability in Ethiopia,” Ramaphosa said on the social network Twitter, after meeting yesterday with the President of Ethiopia ( symbolic position, no executive power), Sahle-Work Zewde.
“Ethiopia occupies a place of pride and honor in the history of Africa, having successfully resisted colonialism and played a prominent role in the decolonization of Africa,” the president stressed, recalling that that country hosts the headquarters of the AU.
In this context, Ramaphosa stressed that “the ongoing conflict is a matter of great concern not only for the countries of the Horn of Africa region, but for the continent as a whole.”
The appointment of the special envoys therefore seeks to help the “brotherly people of Ethiopia” to find a solution to the conflict in a spirit of solidarity guided by the maxim of “African solutions to African problems,” added the president.
In a statement, the Ethiopian government confirmed today that Prime Minister Abiy Ahmed will receive the special envoys to “speak with them one by one.”
But the Executive denied that the former presidents are going to travel to Ethiopia “to mediate between the federal government and the criminal element of the TPLF,” the Tigray Liberation Front (TPLF), the party that governs the region, bordering Eritrea and Sudan.
To date, Abiy, winner of the 2019 Nobel Peace Prize, has ignored international calls for a de-escalation of the conflict and is also reluctant to agree to a negotiation with the TPLF to resolve the crisis, which has caused hundreds of deaths and the more than 30,000 Ethiopians flee to neighboring Sudan.
In addition, the TPLF launched several rockets a week ago against Asmara, the capital of Eritrea, an allied country of Ethiopia in the Horn of Africa, in a step of the military escalation that implied an internationalization of the conflict.
Abiy warned this Tuesday of a “final” offensive against Tigray, after defeating the ultimatum he gave last week to surrender to the TPLF, against which he ordered a military offensive last day 4 after accusing him of attacking an Ethiopian Army base in the region .
The dispute between Tigray, a border region with Eritrea and Sudan, and the federal government had been deteriorating for months, with the indefinite delay of the general elections that were to be held last August in Ethiopia as a turning point.
After the delay in the elections due to COVID-19, the TPLF held its own parliamentary elections last September, which the central government labeled illegal, hence it is now seeking to restore “constitutional order” in Tigray.
In addition, since October 5, the date on which Abiy’s mandate theoretically expired, the Tigray government does not recognize any authority from the federal Executive.