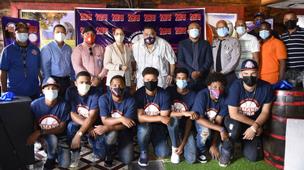 The experienced baseball leader based in the United States, Armando Peña, presented a new Baseball Academy project, with the objective of preparing, developing and projecting baseball players from 13 to 16 years of age from all over the country.

Peña, who was born in Puerto Rico, showed his intention of a baseball academy based in this province, destined to promote and stimulate the practice of this sport among young people in this country, combined with studies.

At the press conference at the La Finca Ranch restaurant, Peña said “One of the goals of the academy is to stimulate young people to make an effort first in their studies and then fight for a place in the major leagues of the United States.”

The leader thanked political leaders, businessmen, the Dominican Baseball Federation, leagues and clubs, for the support provided to this new initiative that seeks to raise the quality of baseball in the country, combined with the studies of new emerging talents. .

Likewise, Juan Núñez, president of the Dominican Baseball Federation (FEDOBE), was happy with the start of this new initiative that serves to promote the development of Dominican Baseball talent. “Baseball doesn’t just create spaces for players looking for signatures to play in the Major Leagues.