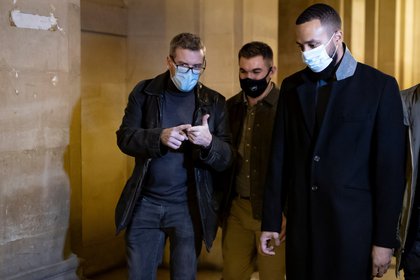 Paris, Nov 19 . .- The American Anthony Sadler, one of those who reduced the Moroccan terrorist Ayoub El Khazzani who on August 21, 2015 tried to commit a massacre on a Thalys train that circulated between Amsterdam and Paris, said today in the trial that expects him to be sentenced to life imprisonment.
“I want El Khazzani never to get out of jail. He doesn’t deserve another opportunity to do that again,” Sadler replied when asked about what he expects from French justice by the president of the Paris Criminal Court.
He insisted several times that, if he had not been detained, the terrorist “would have shot all of us in the car and then would have passed another one.”
Sadler was then a student in Amsterdam, where he had met two American military friends – Spencer Stone and Alexander Skarlatos – with whom he was traveling on the Thalys to Paris when they realized there was an altercation.
The Khazzani, who had boarded the train in Brussels armed with a Kalashnikov assault rifle, a pistol, and a knife in a bag, entered one of the bathrooms and came out with the long gun in his hands, but was met by two men that when they saw him they began to struggle with him.
One of them, Mark Moogalian – who was traveling with his wife – managed to take the weapon from him, but was shot by the terrorist from behind with the pistol and was seriously injured.
“I thought I was going to die” and “I was going to shoot myself in the head,” Moogalian told the court, but then “I saw the cavalry arrive.”
He thus referred to Stone’s irruption, who pounced on the terrorist and, with the help of his friends and another man who was sitting next to him, pinned him to the ground and tied his hands with a tie.
After that, the train was diverted to the Arras station in northern France, where the police took over the attacker, while Moogalian was evacuated by helicopter to Lille hospital in serious condition.
This Thursday he said that he would like this person “not to be able to commit an act like this again” and for that he said that it is necessary that he remain imprisoned “as long as possible.”
He was convinced that El Khazzani had boarded the train “to kill everyone”, a way of rejecting the defense thesis that his target was only the three American friends, as a form of retaliation for the policy of that country in Syria and Iraq.
Sadler also agreed on this, noting that his two companions did not wear any sign that identified them as military or American.
The former student in Amsterdam was the first of the three who testified in court when it should have been Stone, who was handicapped because he suffered an illness during the flight that took him to Paris, where he had to be hospitalized and now there are doubts about whether he will be able to appear in court.
They, but also Moogalian, represented themselves in a film that with director Clint Eastwood contributed to the dissemination of this terrorist attempt and the feat of those who prevented the massacre.
El Khazzani (31 years old) has been sitting on the bench since last Monday with three other men accused of having been accomplices or of having provided logistical assistance in the preparations for this attack, which was led by Abdelhamid Abaaoud, the mastermind of a series attacks in Paris (2015) and Brussels (2016) in which more than 160 people died.
In this process, which must last until December 18, he could be sentenced to life imprisonment if found guilty.