Home>World>The altercation at the Tenerife immigrant camp leaves several injured: “They are in poor condition”

This Tuesday the camp for immigrants of Las Raices, in Tenerife, Dawn with a brawl that ended with the intervention of the National Police, eight arrested and more than a dozen injured.

According to sources from Accem, the NGO in charge of managing the camp, the origin of the incident is unclear, but they affirm that it occurred outside the field and was transferred to the interior, producing a situation that ended up getting out of control, so they decided to go to the police.

The images of what happened have been shared hundreds of times on networks, where it is appreciated not only the moment when the police charge against some residents of the camp, but it is even observed how one of them leaves a trail of blood in the Accem facilities.

The NGO explains that the blood corresponds to one of the young wounded – they do not clarify how it happened – that ended up with a broken leg and visible bone. Three people were taken to the hospital by ambulance, while the rest were taken to the health center by Accem itself, in addition to treating others within the camp.

According to Vicky, a member of the Tenerife Migrants Support Assembly, recounted to 20 minutes, “what happened today we do not know how it happened, we know that there are people on hunger strike. They are tired, with a long time without knowing about their future and are in very bad conditionThat’s why they have been protesting for weeks. “

It’s not the first time

Despite not being something usual, It is not the first time that the security forces have entered the field. On other occasions – due to protests over the conditions of the food – there have been moments of tension and the intervention of the National Police.

From the Assembly they denounce that “on several previous occasions that there have been protests, Accem has reacted calling the police or using disproportionate force of security personnel ”.

They further add that the NGO had told the camp residents that they had been on a hunger strike for days “That yesterday I would have a meeting with someone who could clarify the situation, but that didn’t happen.” 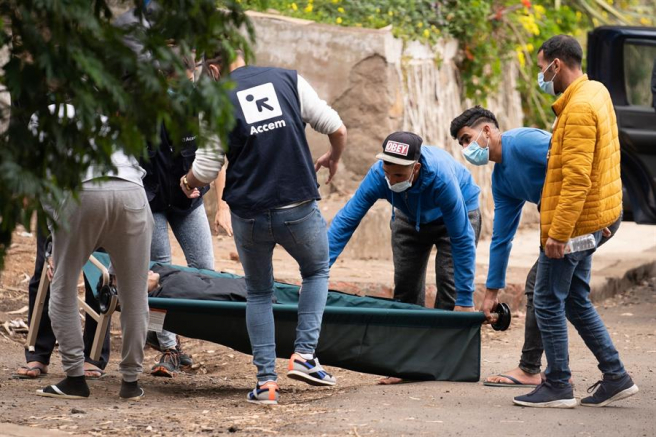 One of the injured lying on the ground while being treated.EFE / Ramón de la Rocha

To know the details of the police action and the current situation in the camp this means has tried to contact both with the Government Delegation and with the National Police, so far no response has been received.