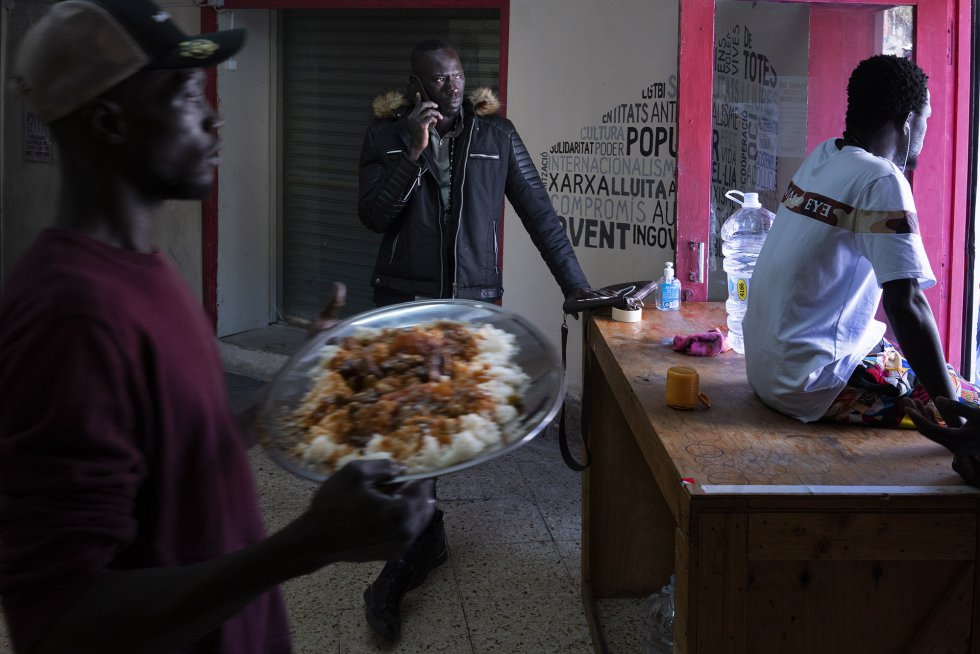 One of the hardest night of confinement in Spain, Keita Baldé, then a Monaco footballer, was hanging out on Instagram at his home in the Principality, when a sad and desperate story caught up with him. He had come to the team three summers earlier to fill the gap for Mbappé, sold to PSG for 180 million. Of Senegalese parents and trained in La Masia, Baldé (Arbúcies, Girona, 25 years old) was hurrying his last days at the club on the Côte d’Azur, where at the controls of a Porsche he looked out over the Mediterranean from roads that twisted between cliffs. That night on Instagram, he was hooked on a video in which the actor and director Paco León spoke with a seasonal fruit worker who worked in Lleida. “I was in shock. Very excited and very touched, ”Baldé tells in a talk with various media, including EL PAÍS.

Serigne Mamadou was one of the 200 seasonal workers who slept those nights of extreme pandemic in the deserted streets of confined Lleida. Senegalese workers who picked cherries under the orders of businessmen who took advantage of their irregular situation to evade the legal obligation to provide accommodation for them. “Right now I come from work and I have been on the street for three days. In ten hours, you rest 30 minutes. You don’t eat well, you don’t sleep well … It’s bullshit, ”says Mamadou in the video, before breaking down in tears and leaving the shot, in a sequence that Informe + now recovers in the documentary Hermanos, which opens this Thursday (22.00 , #Go).

Baldé, this year at Sampdoria, got caught up in that story: “I wrote to Serigne to make a call, and I offered to help him out. I was very clear that something was going to do, but I didn’t know how, or what to do, “he says. He set out to get them food, clothes, and a place to sleep.

The first two goals were simpler: every week he sent money so they could cook something for 200 people, and he asked two friends to rent vans to pick up some clothes he stored in Barcelona. “It was new clothes, with the label. I had a brand that I later closed, and I was going to send it to Africa, ”he says. When his friends opened the doors of the vans in Lleida, the stroke of joy also had a point of confusion: “As if he were going to make a supermodel for all the Africans who were there,” recalls Mamadou.

The third goal, giving them a place to sleep, was more difficult. Despite the payment guarantees that he provided, the footballer found himself with the rejection of several hotels in Lleida to accommodate the seasonal workers. “I would like to go to those same places now with ten other black-skinned friends, with a smart jacket and a good car at the door, try to rent rooms and see if they say yes or no. He won’t even realize I’m black, ”says Baldé, who tries to avoid the word racism. “I’ve never had a problem, but what can I tell you …?”

He did not give up. Baldé invokes the memory of his father and what he saw as a child in his parlor in Santa Maria de Palautordera: nights with the floor strewn with mattresses to shelter drifting compatriots. “When you see it, it stays with you,” he says.

The footballer insisted until he found a place to accommodate the 200 seasonal workers, and returned to the contrast of football and its catwalk excesses: “We are privileged. That’s why I give my all on the field, because I’m lucky. Sometimes, I see a sad colleague, I look at him and I think that we eat our heads for some nonsense … ”.

Baldé is uneasy about the upcoming fruit season. “In May we will be like this again. What do we do? Do we pray for another Keita to come out? ”He says. “I have been in Italy almost longer than I have lived in Spain. I don’t know those people, and there were 200. Yes, they are from Senegal, but I don’t know them. Do I have to come from Monaco to solve a problem in Lleida? What if I don’t see that video?