The Opel Mokka 2021 begins its commercial stage and with it the reconquest of the markets. His second generation has taken too long to arrive, but it must be recognized that he brings to the table many qualities that will make him stand out once again.

Opel was smart and fast with the launch of the first Mokka. It launched in 2012, just a couple of years after what everyone considers the first successful B-SUV, the Nissan Juke. Between the two they fought a tough battle to see which one sold more units, but everyone knew that the German was better in everything, he was more beautiful and he was also much better. But as the years go by Opel has been resting on its laurels, delaying the update of one of its key models while many and varied rivals emerged.

During these nine years, many things have changed. The main thing is that Opel is no longer part of General Motors, it is now a member of the Stellantis Group, which is not the name of a Star Trek ship, it is the fourth world manufacturer, emerged from the union between the PSA Group, where Opel was already there, and the FCA Group. Therefore, the earlier Mokka was developed together with the Americans, and now together with the French. A fact that changes absolutely everything.

Possibly we are facing the most important launch of Opel since the new Corsa was presented, with which it shares many things. Well, with him and with the Peugeot 208, the DS 3 Crossback and a few others, but now I will go into that more carefully. The Opel Mokka 2021 is so important that it launches a new design philosophy. A new aesthetic language very different from any current product of the house and any other B-SUV that we see on the street. Despite being a small model with barely 4.15 meters long, 1.8 meters long and 1.53 meters high, the image it projects is very powerful. 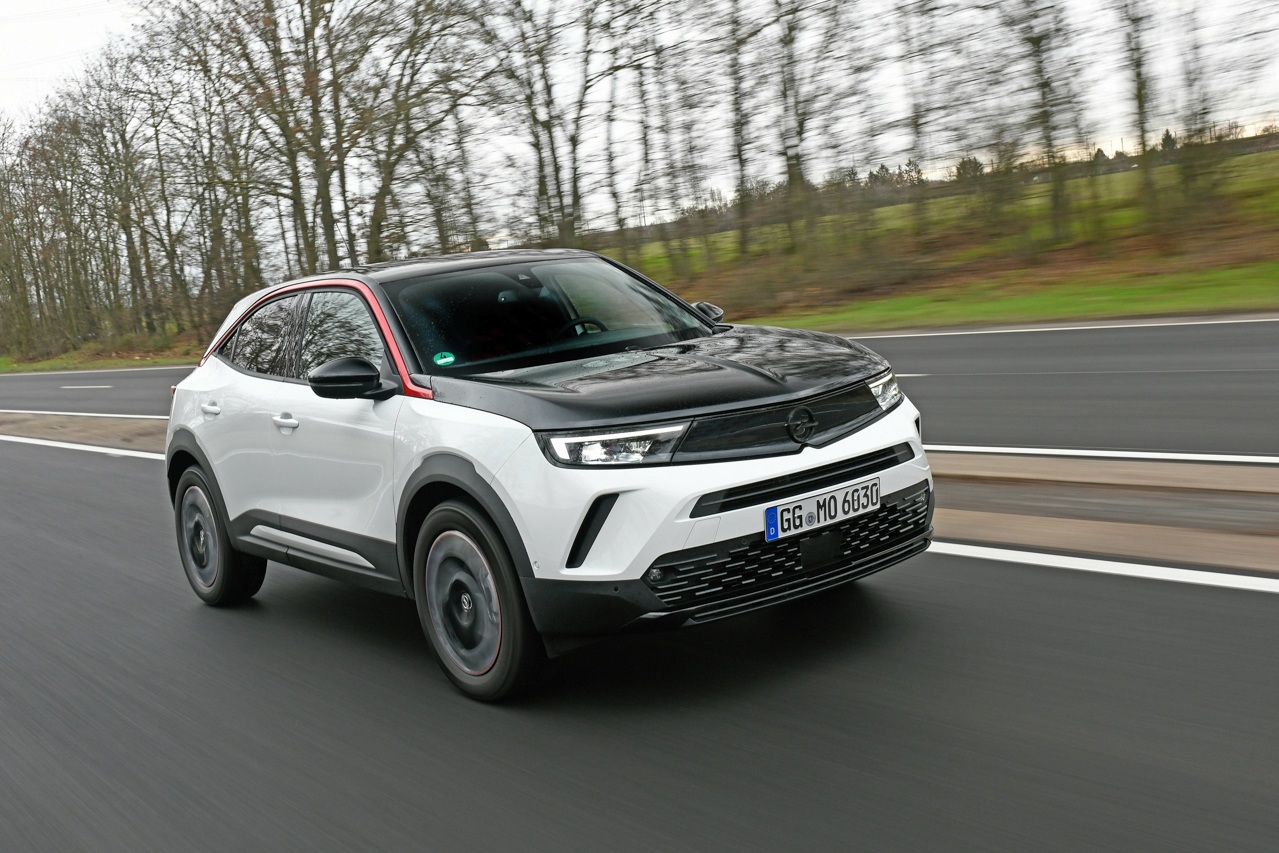 The new Mokka arrives completely renewed. To the reconquest of the market

The first thing that stands out is the high nose. A considerable height, a lot of horizontal line to give that feeling of width and large elements to generate a more striking image. Then some chrome accents are used for an elegant touch, and headlamps with a very clear LED light signature. Say, by the way, that the headlights are attached by a plastic molding in Pianno black, something that I absolutely do not like because I do not think that it withstands the attack of mosquitoes, stones and other elements that we find on the road very well.

The Mokka has several trim levels: Edition, GS Line, Business Elegance and Ultimate. In addition to more equipment, in each one of them the external appearance changes slightly, although they all look alike. The base finish minimizes the presence of chrome details with 16-inch wheels and optional contrast roof for 470 euros more. For its part, the most complete finishes have wheels up to 18 inches and a roof of a different color as standard, as well as a greater number of chrome details.

As for the rear, it must be recognized that the design is not so attractive. Everything revolves around a large boot lid and a very bulky bumper that, as in the front, raises the height using a lot of black plastic to give the feeling of packaging and country style, something that is also used on the side and on the wheel arches. The headlights are more reminiscent of the Opel Astra than the Opel Corsa, and right in the center we find the logo with the Mokka name in elegant typography. That big gate gives access to a luggage compartment with a minimum of 350 liters for the combustion versions and 310 liters for the 100% electric versions. 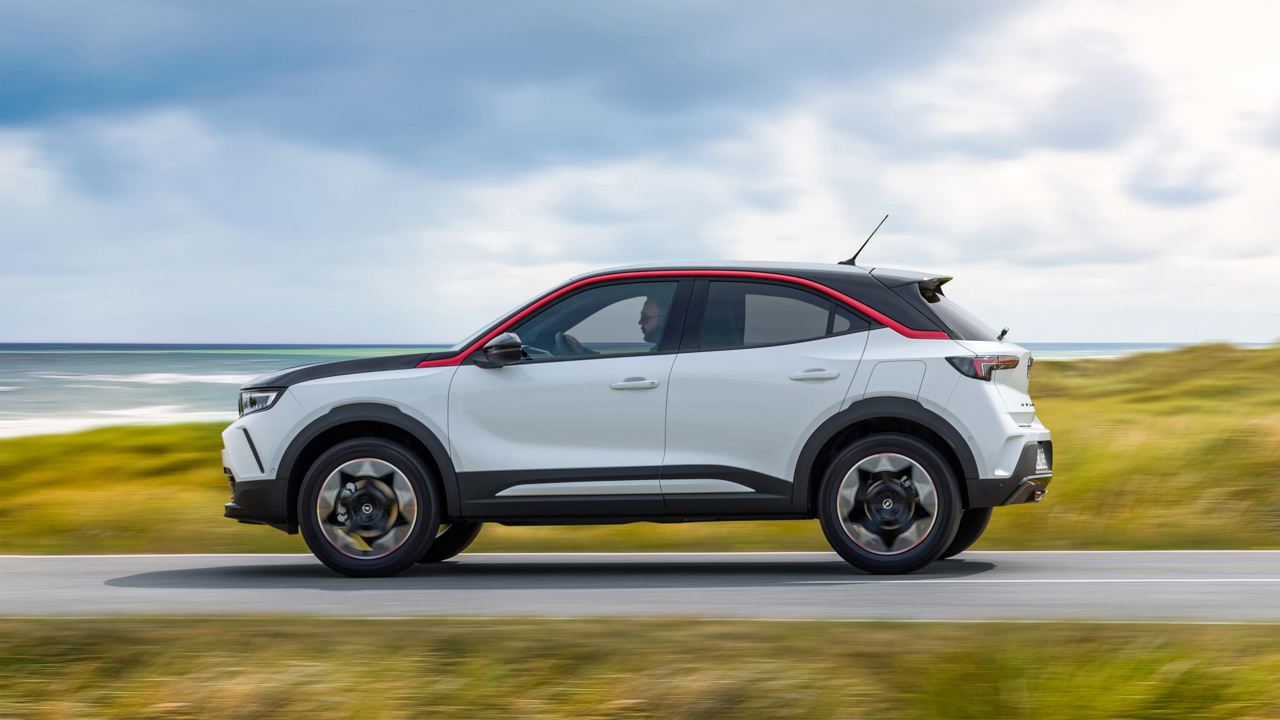 The measurements are quite compact. Ideal for the city, although somewhat tight on space

As for the interior, Opel offers us a space where technology takes center stage. Modern times demand state-of-the-art systems, and the more spectacular the presentation, the better. In this case the Germans opt for the continuous double panel route, something that is quite reminiscent of what the current Volkswagen Golf offers. But before entering to assess the entire system, I must admit thatthe quality is not all bad. Of course there is a lot of hard plastic, but other surfaces are well finished with softer and more pleasant materials, such as the upper part of the front door panels or the upper part of the dashboard. And once again we came across the Pianno Black on the screen trims, on the center console and in the center tunnel.

As standard, the Mokka comes with both screens. The presentation will always be the same but the size of the screens will not, both being seven inches in the access version. This will increase the size of the frames and the amount of black lacquer. For 1,200 euros more, or standard on the Ultimate finish, we can put the most striking configuration of all with a 12-inch panel for the instrument panel and 10-inch for the multimedia system, which will also add the navigator and the connected services of Opel Connect.

In general, there are no problems in terms of image quality and fluidity, and on top of that, as the multimedia screen is turned a tad towards the driver, we do not have to take our hand too far from the wheel. Of course, not all systems are managed from it, since the air conditioning is controlled from its own separate module, a little low by the way, but much better there than not having to constantly fiddle with the screen. 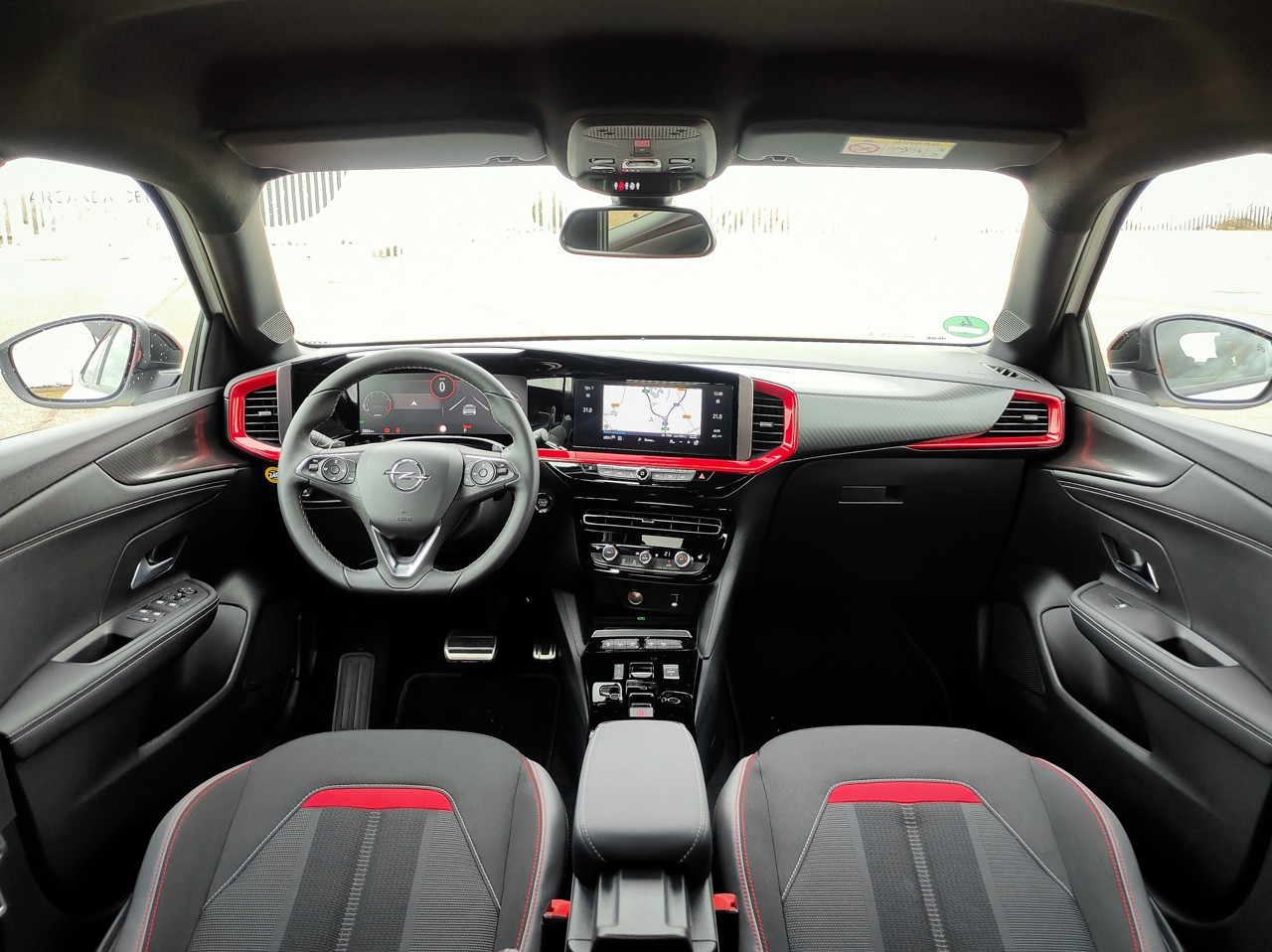 Very colorful interior for colors and presentation of technology

The display of screens is only part of what the new Opel Mokka can come to look like. Standard comes with details such as cruise control, lane keeping alert, air conditioning, the aforementioned 7-inch panels, digital radio and LED daytime running lights. To all this we can add leather or Alcantara upholstery, LED matrix headlights, rear camera and parking sensors, keyless entry and start, dual zone climate control, adaptive cruise control, heated front seats and steering wheel, wireless charger and tow bar, among more details.

If you remember, I said before that the Mokka shares many elements with other Peugeot, Opel and DS models, but the main one is the CMP platform. It is a state-of-the-art architecture, designed not only to offer electrical and electrified mechanics, but also a much better interior space. Of the 4.15 meters long, 2.56 are used for the wheelbase. That translates into a better cabin than the previous model, although in this second row of seats there is no excess space.

Three adults will be quite uncomfortable because there is not much distance for the shoulders, but as far as the hollow for the legs is concerned, there are two or three fingers and a few more for the head. Passengers over 1.85 will be somewhat fairer, but the truth is that for its small size the habitability is very well resolved. The Opel Mokka-e offers the same interior space, although in that case the trunk volume is reduced by the presence of part of the electrical assembly. 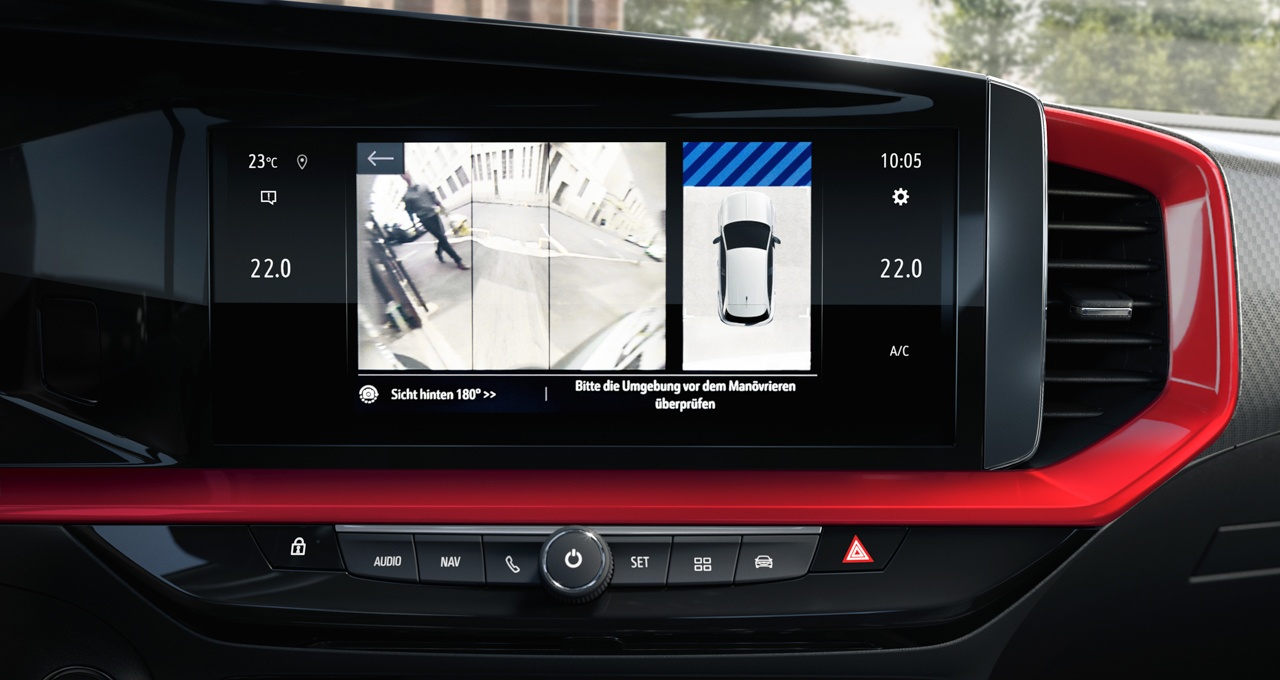 Coming to the mechanical section, the new Mokka sports a completely new range. At its launch, three versions will be available, two gasoline, one diesel and one electric. The gasoline versions always have the same 1.2 turbo three-cylinder engine that delivers 100 or 130 horsepower. The diesel for its part offers a 1.5-liter four-cylinder turbo block that always delivers 110 horsepower. All units send power to the front axle and management is shunted to a six-speed manual gearbox or an eight-speed torque converter automatic transmission, only available on the 130-horsepower gasoline Mokka.

If there was something that characterized the previous generation of the Mokka was its great dynamic behavior, it was one of the best in that regard, and I have to admit that the new one is more dedicated to comfort than to performance. The range of heat engines is more than sufficient and correct, no matter which one you chooseEither the gasoline version of 100, 130 or diesel of 110. The Mokka is more than enough in each and every one of them.

Obviously the most recommended are the most powerful because they have more punch and performance, and If you are looking for the automatic change you can only use 130 horsepower gasoline, which will raise the final price considerably. I recommend it if you are going to circulate a lot in the city because it will be more comfortable for you not to have to be doing so much hand and foot play, plus it is not supposed to increase consumption, because officially they are practically the same. 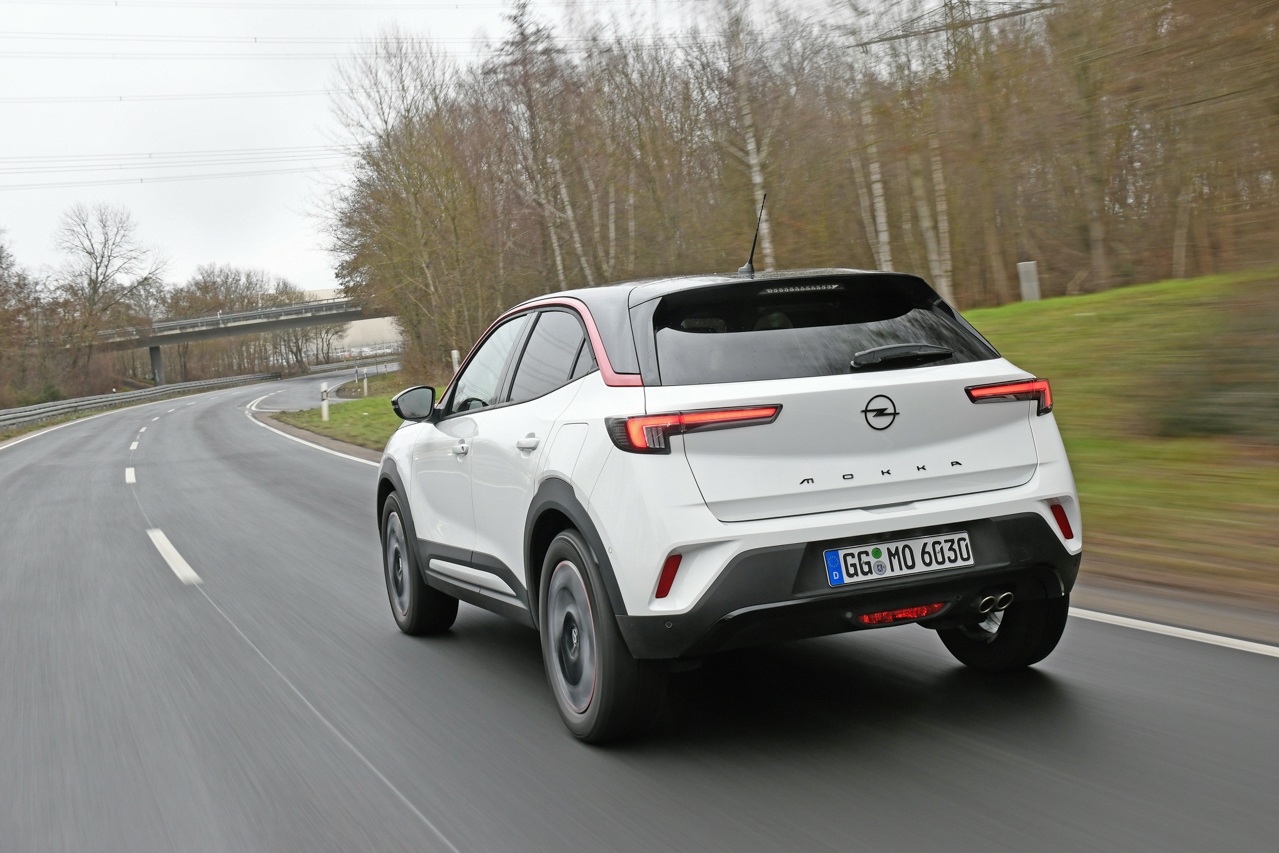 But like I say, what I notice the most is the change in ride quality. It’s a more mature car thanks to that new platform and more refined engines. You can get away from the city without problems, and thanks to this you can make long trips without flinching. That makes it a more versatile car, and more functional for different types of drivers. It can serve many uses and circumstances.

His driving has lost dynamism and he has also lost off-road ability. In the previous generation there were front-wheel drive and all-wheel drive units. In this case there will be no 4×4 versions and it will not even have the increasingly common specific engine maps for the field. What there are are driving modes: Eco, Normal and Sport. The difference between them is not very big because neither affects the suspension. Yes, the response of some components such as the accelerator and the speed of the automatic transmission is modified, but in reality it is nothing remarkable.

The Sport mode slightly modifies the engine sound, although it is a false audio expelled by the speakers of the sound system

Although during the presentation I have not had the opportunity to test it, the Mokka-e, the 100% electric version, has the same configuration as the Peugeot e-2008. It has a 136 horsepower electric motor with a water-cooled lithium-ion battery with a real capacity of 46 kWh. Approves a maximum autonomy in WLTP cycle of 324 kilometers with a top speed of 150 km / h and a consumption of 17.4 kWh per 100 kilometers traveled. Although it is already available for sale, it will still take a few months for it to reach the markets en masse.

The starting price of the Opel Mokka is 21,824 euros, without offers or promotions. This value corresponds to a unit with a 100 horsepower gasoline engine, manual transmission and Edition finish. The diesel starts at 22,500 euros for the same finish and the 130-horsepower gasoline at 25,358 euros but with a higher base equipment. To that amount we will have to add about 1,900 euros more if we want the automatic change. As expected the most expensive of the whole family is the Mokka-e, whose starting price is set at 35,400 euros, without offers or promotions. 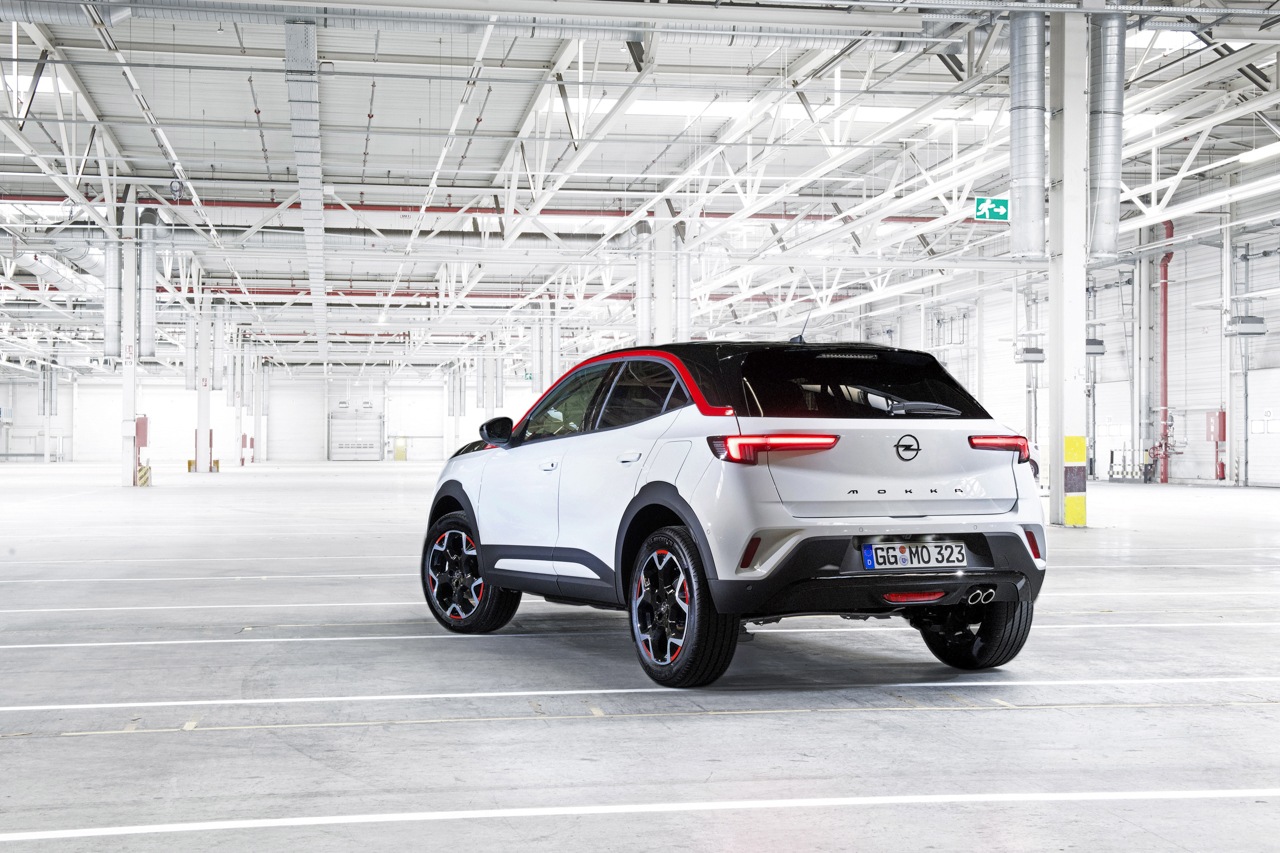 It may have taken Opel too long to renew the Mokka. In these years of doubts and neglect, many rivals have emerged such as the Renault Captur, the Hyundai Kona, the SEAT Arona, the Juke or the Skoda Kamiq. All of them are going to make things very difficult for him, and once again he will have to find his place in the market. For the reconquest, it offers a very attractive design, good equipment, correct habitability and a range of engines without many luxuries but more than correct., in addition to an electric version for those who want to enter the field of battery-powered cars. The first impressions have been good, although there are things that could be better, such as the excessive use of Pianno Black both in the body and in the interior, and the quality of some materials, which could be a bit better.