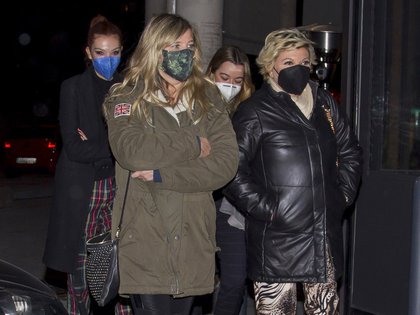 02/17/2021 Terelu Campos and Alejandra Rubio, having dinner with friends in the capital EUROPA SPAIN SOCIETY

Despite the family situation they are experiencing, Terelu Campos and Alejandra Rubio are more united than ever and, oblivious to the comments that question whether or not the young woman was by her mother’s side during the collaborator’s illness, mother and daughter enjoyed Madrid night in the company of some friends in a bar near her home.

Leaving just in time to return home before curfew, Terelu and Alejandra shared laughter as they tried to find the car and they didn’t know exactly where they had parked it. After the alleged rapprochement between the young woman and Carmen Borrego in the last hours, Terelu has been visibly upset at the information that accuses her daughter of not having been up to par during the double mastectomy she underwent in 2018.

The daughter of María Teresa Campos, who usually shows her patience and her mettle in the face of the different information that often circulates about her mediatic family, is not willing, however, to allow Alejandra to be questioned as a daughter and, very angry, has exploded as we hadn’t seen her for a long time.

– CHANCE: Terelu how are you, good night.

– CH: In the end your sister and your daughter were together, family things that can end well. A witness has even said that your sister seemed a bit embarrassed, we do not know what exactly happened in the conversation.

– CH: They say that the reason could be jealousy on various parts, from your sister towards you, towards your daughter … You don’t give it any importance, you have always said that family comes first.

– CH: What do you think I have been negotiating if I returned to the program. They say it was behind your back.

– CH: It magnifies much more than what happens.

– TERELU: Best of all, we don’t know where the park has left the car. Damn bad luck. We are going to visit all of Aravaca, which is to the other side.

– CH: Terelu I suppose that one of the things that could have bothered you the most is that your daughter had not been with you as long as she should when you were ill.

– TERELU: Look, that way it didn’t happen. I just follow that, it doesn’t happen there anymore. Let him ‘screw’ my daughter with a barbarity like that, you have to be very shameless. I just have to say that. It’s over.