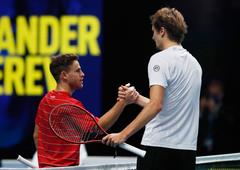 Argentine rookie Diego Schwartzman was eliminated from the ATP Masters Cup after losing to Alexander Zverev on Wednesday, and after Daniil Medvedev beat Novak Djokovic to advance to the semi-finals.

Schwartzman succumbed 6-3, 4-6, 6-3 to the defending champion and posted his second loss in the season-ending tournament.

Zverev’s victory opened the door for Russian Medvedev to reach the semi-finals with a victory over world number one Djokovic at Arena 02 in London.

Serbian Djokovic could have secured his passage to the next phase with a straight-sets victory.

Schwartzman is the first Argentine to have played in the tournament’s singles draw since Juan Martín del Potro in 2013. He will close his participation on Friday, with a duel against Medvedev.

Zverev, who was coming off one of his worst games of the season on Monday when he lost his debut to Medvedev, led 3-1 in the second set. But Schwartzman reacted with two service breaks.

Visibly frustrated, Zverev slammed a ball into the empty seats in the arena after losing the second set. The 23-year-old German recovered and broke Schwartzman’s serve twice in the third set.

Djokovic has won the title of the tournament that brings together the best eight of the season five times. He’s one away from equaling Roger Federer’s record.

But the Serbian fell for the third time in his last four games to Medvedev, 6-3, 6-3. Djokovic can still advance if he beats Zverev on Friday in a life or death match for the two opponents.