Telephonemakes a net profit of 886 million euros during the first three months of 2021, 118.3% more than in the same period of the previous year. These results show the resilience of the company’s business model, the effectiveness of the management applied, focused on reducing costs and stable operating cash flow, and the lesser impact of the effects derived from the pandemic and the evolution of exchange rates compared to the end of 2020. Earnings per share reached 0.15 euros in the first three months of the year, compared to 0.06 euros in the same period last year.

“These results reflect the success of our strategic plan and Telefónica’s ability to execute to achieve sustainable and profitable growth, driven by our technology businesses and by the deployment of the best networks and services,” he underlined. José María Álvarez-Pallete, president of Telefónica.

The figures for the first quarter place the company on the path of meeting the financial objectives established for 2021, consisting of a stabilization of income and operating income before amortization (OIBDA) and a return to a normalized level of investment ( CapEx) on sales of up to 15%.

In this sense, both revenues and OIBDA already express this progressive stabilization, since they reflect a sequential improvement for the third consecutive quarter. In the first quarter, the Group’s revenue stood at 10,340 million euros, 9% less than in the same period of 2020, but only 1.3% less in organic terms, a figure that shows a decrease less than in previous quarters.

In addition, the efficiency achieved with the management applied by the company, with a reduction in operating expenses of 9%, makes it possible for OIBDA to grow 0.3% in the first quarter in organic terms.

The data for the first quarter also reinforce the Group’s commitment to debt reduction. As of March 31, the net financial debt stood at 35,796 million euros, 6.4% less than a year earlier. Once the operations pending closure materialize, the debt will be reduced by approximately 9,000 million additional euros. With this cut, it would be around 26,000 million euros, half of the existing in mid-2016. 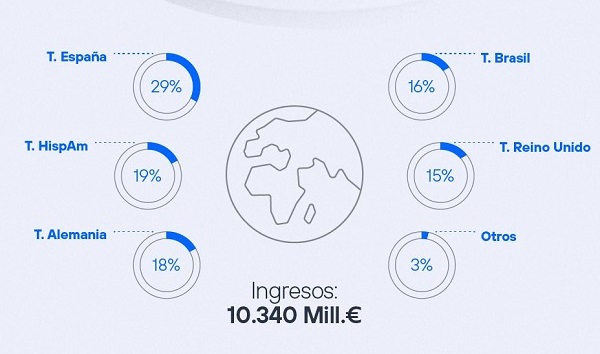 Distribution of income by regions.Networks and Clients

The quality of the infrastructures has continued to be a priority for Telefónica at the start of 2021. This quality translates into more and happier customers. Telefónica’s total access base grows to 347.4 million, 1.5% more than at the end of the first quarter of 2020, with clear growth in the high-value user segment thanks to the Group’s differential infrastructures. Ultra-broad banking (UBB) retail accesses rose 8.2% in the last year and fiber to the home (FTTH) accesses rose 23.5%, representing 53% of total customers broadband retailers. Increased customer satisfaction is reflected in an improvement in the NPS (Net Promoter Score) to record levels of 27% in the four main markets.

The company ended the first quarter with 137.1 million real estate units (UUII) passed with fiber, 6% more than a year ago, and of which a total of 63 million run through its own networks. In relation to the fiber network, Telefónica Infra announced in the quarter the creation of two new wholesale vehicles for the deployment of fiber in Brazil and Chile, thus joining the joint venture created with Allianz in Germany, presented last month of October.

Execution of the Strategic Plan

The five pillars that underpin Telefónica’s strategy are also making good progress. With respect to the main markets, Spain maintains the European leadership in fiber deployment and already reaches a 5G coverage of 80% of the territory, Meanwhile in UK the merger of O2 and Virgin Media It is progressing according to expectations, after the British regulator (CMA) approved the operation on a preliminary basis in April. On Brazil, the acquisition of Oi’s mobile assets is also continuing, and in Germany the company closed a national roaming agreement with 1 & 1 Drillisch that guarantees a long-term income line.

Regarding Hispam, the improvement of the operating model becomes more and more evident. The maximization of efficiencies in operating costs and investment make possible a strong increase in operating cash flow in the region.

Telefonica Tech reinforces its growth history in the first quarter with an increase in revenues of 25.1%, to 166 million euros, while continuing with the process of migration of services and with the transfer of businesses and assets. In this way, this unit advances in its objective of expanding the company’s perimeter, which will be extended over the next few months. In addition, it continues to rely on its operational and commercial capabilities, its differential assets and agreements with key partners to offer its services to the Group’s more than 5.5 million B2B clients.

As to Telefonica Infra, and together with the creation of the aforementioned wholesale vehicles, its main success during this first quarter was the sale of Telxius’ tower business to American Tower Company for 7,700 million euros, an operation at record multiples and a benchmark in the sector.

Finally, the fifth strategic pillar, which seeks to further simplify and digitize the current operating model, also paid off during the quarter. The digitization of processes accounts for 79%, while digital sales have grown 37% in the four key markets and now represent 35% of the total. That is, until March, about 30 million customers, 12% more, have chosen to use digital channels throughout the Group.