To say that Cyberpunk 2077 is already very close is, let’s face it, a bit risky. A few days ago, talking with a friend, we crossed our fingers that it would arrive in time for the launch of the future new generation of consoles (yes obviously I am not talking about PS5 or Xbox Series, but about their future successors). However, it seems that CD Projekt Red developers would already be finishing their work (although not in the best conditions), thus concluding a project that has taken no less than eight years, almost nothing …

As a result, CD Projekt Red has stepped on the marketing accelerator and is giving us long teeth showing us that, based on what we have seen, it seems that the wait has been worth it. So, if this morning we showed you some videos of the dubbing and the soundtrack, as well as the new trailer, now we can see a new one behind the scenes, this one published by NVIDIA, which shows something that many of us were waiting to see : Cyberpunk 2077 with ray tracing.

In the video, recorded in collaboration with CDProjeck RED, we can see excerpts of interviews with some of the Cyberpunk developers, putting the focus on what ray tracing brings to Night City. In addition, and for those who want to see it in motion (which are many of us, actually), the video also includes a montage never seen before, in which we will have the opportunity to understand the reason why we pay so much attention to this point.

In the video montage, you will see Cyberpunk 2077 with Ray Tracing using DirectX RayTracing, part of DirectX 12, and using DLSS 2.0 (Deep Learning Super Sampling), a NVIDIA technology that, as its name suggests, uses artificial intelligence functions (deep learning) to improve the performance of the graphics adapter, unloading it from certain functions, something that translates into a higher framerate, as well as improvements in the definition of the elements of the image.

In addition to video, NVIDIA and CD Projeck RED have published a Cyberpunk 2077 technical requirements list, making the distinction of whether ray tracing is used or not. In the table below you can see the hardware necessary to play it with different configurations: 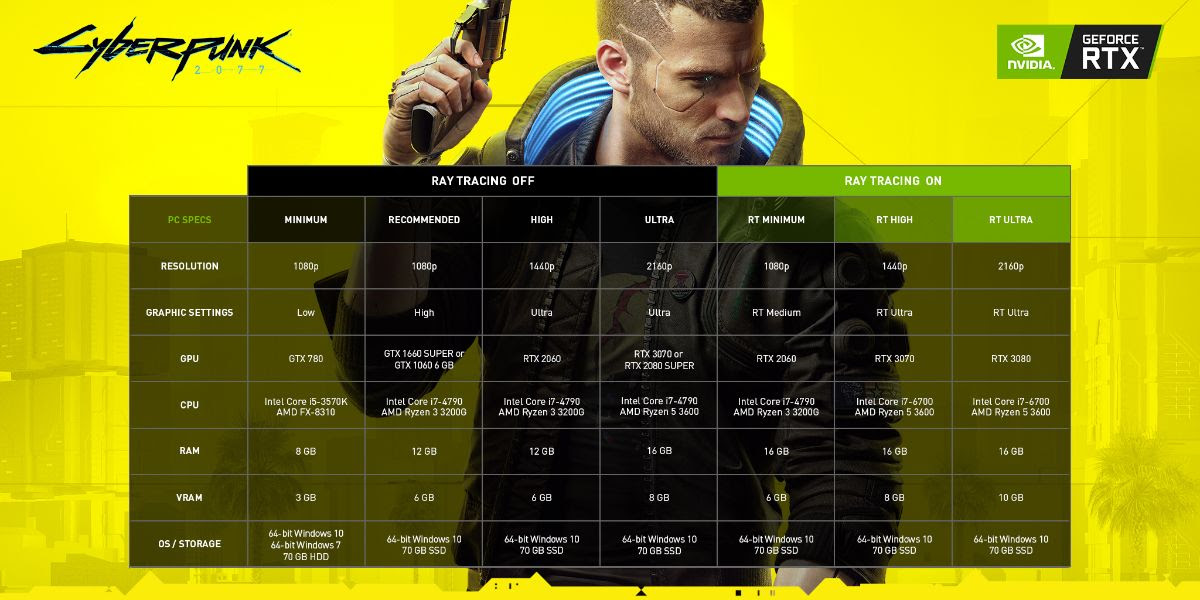 As you can see, the requirements to play it in the most basic graphics mode (1,080p with the settings on the low level and obviously without ray tracing) are quite “modest”: a PC with an Intel Core i5 3570K or an AMD FX-8310, eight gigs of RAM, and a graphics adapter GeForce GTX 780 or higher will be able to move Cyberpunk 2077 in a decent way.

If we go to the opposite extreme, that is, ray tracing to the maximum, 2,160p and the settings at the highest level, things change substantially, since we will need, at least, an Intel Core i7-6700 or an AMD Ryzen 5 3600, 16 gigs of RAM and a graphics card RTX 3080 or higher with a minimum of 10 gigs of video memory to enjoy Cyberpunk 2077 in style.

There is no information in this list of AMD GPUs Recommended for each configuration of Cyberpunk 2077. And it is that the performance of the same with this title is still unknown. A mystery that, as we already told you, will be a litmus test for the new generation of AMD.