Next, we give an answer to the values ​​for which we have been asked the most throughout the morning. José María Rodríguez, technical analyst at Bolsamanía, analyzes Acerinox, Nvidia, Solaria, Grenergy, PharmaMar, bitcoin, Mapfre and ACS.

Good morning, how do you see Acerinox? Thank you very much for your reply. B.

Dear reader, good afternoon. Acerinox It continues to be one of the strongest values ​​in our market today, which does not mean that it cannot correct in the short term. We are witnessing a general market correction and few stocks are getting rid of it. In fact, the title could look for the new support zone (formerly resistance) conferred by the high part of the lateral-bearish channel of the last six years. Or in other words, the area of ​​approximately 10.20 euros is right now a most interesting support level within the current price structure. Above, on the resistance side, we have this week’s highs (12.43), 2015 highs at 12.93 euros and all-time highs at 13.60 euros. Thanks to you, greetings. 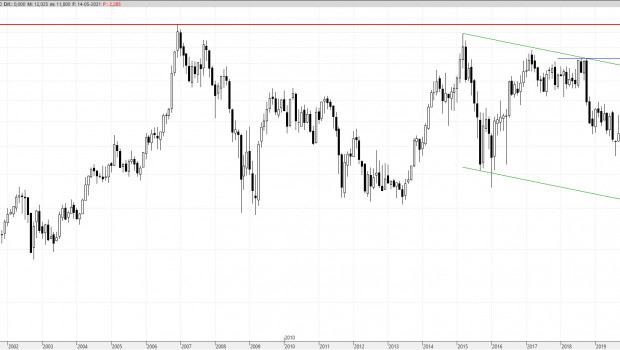 José María, good morning. I wanted to ask you about the Nvidia technology after the latest crashes. How do you see the value? Thanks. A.M

Dear investor, good afternoon. Nvidia it is in a corrective phase like the entire market, especially technology. In terms of the medium and long term, it is clearly bullish, there is no doubt about that. What does not take away so that in the short term it can address the important horizontal support that it presents in the range of 462-468 euros. If it is necessary to try to rise in value, the ideal would be to do it in the mentioned price range and as long as this support is not pierced. All the best. 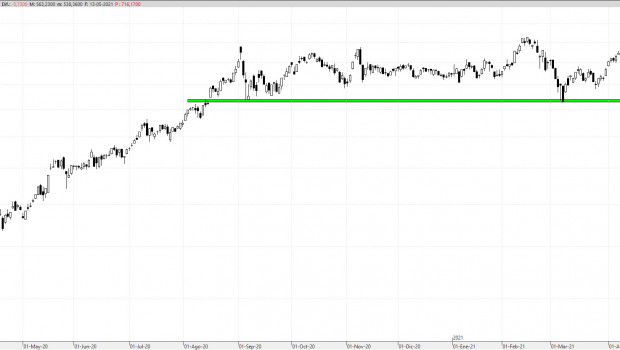 Good morning, José María Rodriguez. I would like to know your opinion on Solaria and Grenergy, that there is no way they will wake up beyond point bounces. What path do you see in the medium and long term? Greetings and thank you very much for your attention. OJ

Dear investor, good afternoon. From Solaria we have talked at length in the last few weeks / months. Rebounds aside, we have always made reference to the important support zone that presents in the bullish guideline of the last five years and that happens at the current moment by approximately 13 euros. The recent confirmation of a descending triangle in the value after piercing the support of 16.10 euros has led us to consider the return to the primary bullish guideline of the last great bullish cycle as the most likely scenario. Or what is the same, if you have to try at the value that is at the closest possible price levels to the guideline. 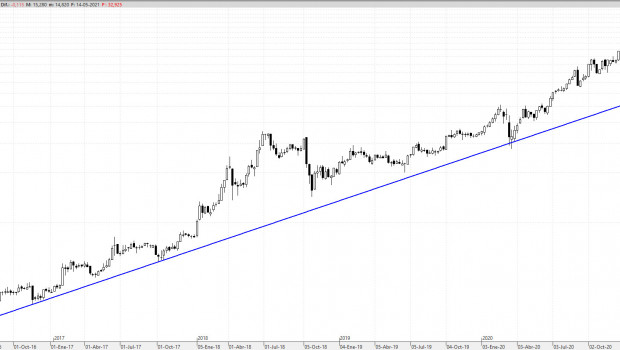 As to Grenergy, presents a clear corrective phase like the entire renewable energy sector. We do not have a return figure from the falls, nor do we expect it in the short term. The weekly corrective candles happen again and again and thus it does not go up. At the moment all we have is a potential support zone at 22.40-22.50 euros, previously resistance. The weekly oversold shows extreme readings, which should favor the occasional violent rebound. But there is nothing to tell us that we have seen the ground in this sector. Thanks to you, greetings. 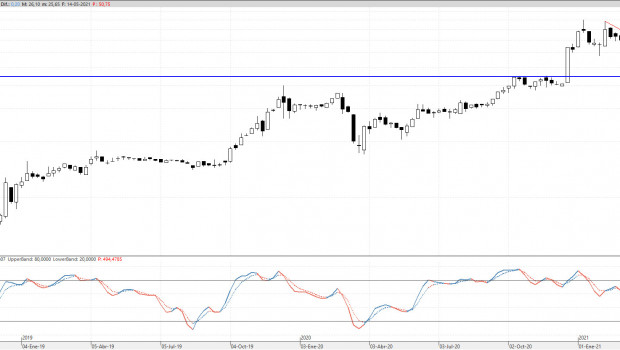 Good morning, Mr. Rodríguez. What happens to PharmaMar? It has me totally baffled. As soon as he bounces hard and weeks later he loses everything he has earned. Right now I neither win nor lose, but I don’t know whether to sell them for something else. It becomes hard not to win anything after accumulating significant profits. Greetings. M.PR.

Dear reader, good afternoon. I have to admit that a server expected more of this value, especially from the support area to which we have referred so many times the bullish gap at the end of January. There, with a ‘stop loss’ in the gap itself is where the return-risk equation became optimal on the long or bullish side in PharmaMar. However, the gap was closed, which is the same, it was canceled by taking us out of the market. At this point, everything suggests that the value may seek the important support that it presents in the December lows (66.26). And I can tell you little more at this time. All the best. 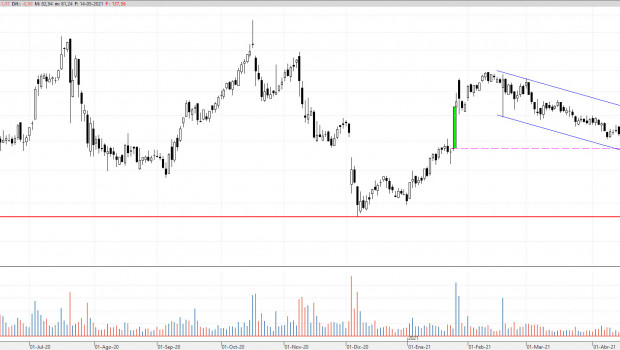 Hello good day. I have a bitcoin at $ 22,000 from when it broke the all-time highs at the end of 2020. How far do you think you can continue to climb? Do I keep them or do I collect benefits? Thanks and greetings from Ayamonte (Huelva). G.MR.

Dear investor, good afternoon. The bitcoin we analyze them this Thursday (You can read it here) and the only thing I can tell you despite the falls this Wednesday-Thursday morning is that nothing has really changed. It is moving within a wide side since February and this is not bad. Somehow it is draining / correcting the previous excesses proportionally. Instead of falling hard, he is doing it, above all, consuming time. What is clear is that as long as it does not overcome the resistance of $ 65,000 (historical highs) we will not have the confirmation of a new bullish section. But today we can and should remain calm when it comes to the underlying uptrend. Thanks to you, greetings. 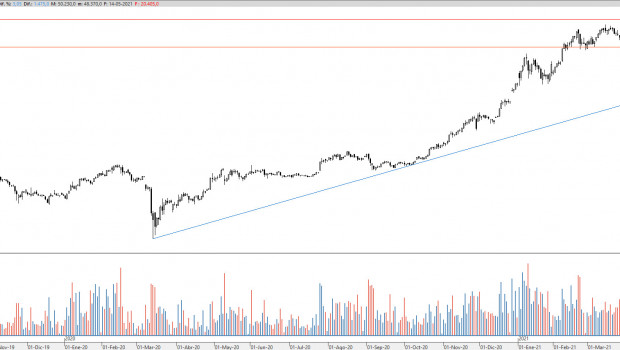 Daily chart of the future of bitcoin

Good morning, Mr. José María. I wanted to ask you about Mapfre and ACS. Are both good options for the medium term? Thank you. F.BC.

Dear reader, good afternoon. About Mapfre and ACS they ask us a lot in recent times. And there are no changes regarding the comments of each one of them. Figure back is clear in Mapfre and the falls of the last days do not imply anything. In fact, our target for the current bullish movement is at the resistance of 2.17 euros: the weekly bearish gap at the end of February 2020. And above the bearish guideline, now at 2.35 euros. A priori, the falls in the insurer should be interpreted as a new opportunity to get on the shopping train. 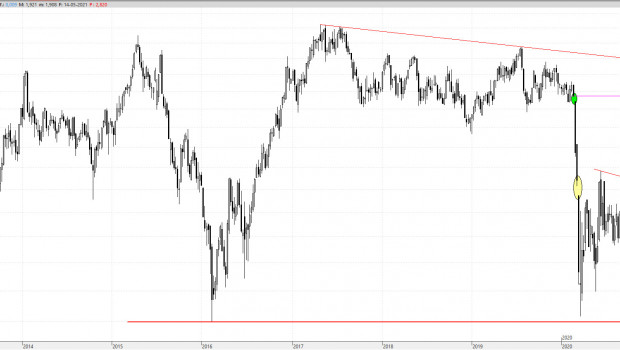 As to ACS It is not a value that I dislike and that I think is holding up quite well the market’s stakes in recent sessions. It is a value in which I trust to the extent that the support of 24-24.25 euros is respected. Piercing it would be a jug of cold water for the underlying in question. Above, on the resistance side, we have 29 euros and the all-time highs (35.70). Thanks to you, greetings. 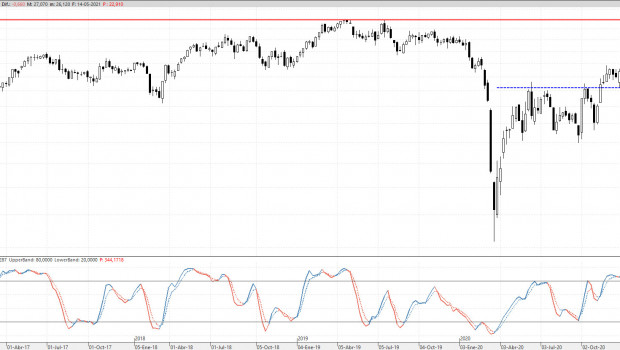 Still don’t know about Trader Watch? TW is a service that offers continuous real-time monitoring of the financial markets, looking for the best investment opportunities at all times.

Note: Investment decision-making must be done in a responsible manner and being aware of the risks that are assumed. Web Financial Group accepts no responsibility for the content and analysis of the practice. It is also noted that trading in the stock market involves a high risk and involves constant monitoring of the position.