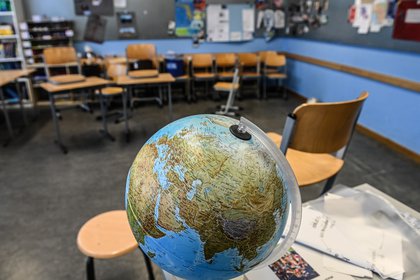 Berlin, Feb 19 . .- The German Association of Teachers (DL) spoke out against a hasty return to face-to-face classes, suspended since last December 16, due to the mutations of the coronavirus and warned that a third The stoppage of public life could put the school year at risk.
Speaking to the Funke media group, the president of the DL, Heinz-Peter Meidinger described the mutations, of which the British one already represents 22% of infections in Germany, as “the greatest threat to a clear, reliable and sustainable perspective. of reopening of schools “.
In his opinion, face-to-face classes should be allowed only from a cumulative incidence in seven days below 35 new infections per 100,000 inhabitants.
In the same way, a hybrid format of virtual and face-to-face classes should only be considered if the incidence in the corresponding region remains below 100 for at least a week “and the downward trend in new infections is stable,” he added. .
Opening hastily with incidences that are too high could “very quickly reverse” this trend, possibly with huge consequences for children.
“A third break in public life would raise the serious question of whether it is still possible to save this school year,” he warned.
He described as “irresponsible” that in some federal states it is partially or completely turning to face-to-face coves in districts and municipalities with an incidence well above 100.
For a safe return to the classroom, Meininger demanded stricter measures and also prioritize the vaccination of teachers and educators in kindergartens, as well as guarantee air filtration equipment in those spaces in which it is not possible to ventilate sufficiently.
The mayor-governor of Berlin, Michael Müller, for his part, advocated changing the order of priority in the vaccination campaign due to the reluctance among the population to the AstraZeneca preparation.
“I am not going to allow tens of thousands of doses to be stored in our cabinets while at the same time millions of people across the country would immediately allow themselves to be vaccinated,” Müller told the daily “Tagesspiegel”.
Around 107,000 of the 740,000 doses of AstraZeneca supplied have been inoculated throughout the country so far and also in Berlin, where there is freedom to choose the vaccine, the majority prefer the BioNTech / Pfizer or Moderna.
Müller first proposes to prioritize vaccination among teachers, educators, police and firefighters, but also to make an offer to retail and public transport employees, since these professional groups “are in contact with hundreds of people every day.”
Since December 26, the number of people who have already received at least the first dose of any of the three vaccines available against covid-19 in Germany has risen to 2,991,792, which corresponds to a share of 3.6%. , of which 1,580,628 – 1.9% – have also obtained the second dose.
The German health authorities registered 9,113 new positives in the last 24 hours – compared to 9,860 a week ago – and 508 fatalities – compared to 556 -, according to data from the Robert Koch Institute (RKI) of virology updated last midnight.
The cumulative incidence fell slightly in the whole of Germany to 56.8, compared to 57.1 yesterday, while a week ago it was at 62.2.
The number of positives since the first contagion was announced in the country on January 27 of last year totals 2,369,719 -of which 2,176,300 are recovered patients- and the number of fatalities with or from covid-19 rises at 67,206.