The Styrian Grand Prix is on BBC Radio 5 Live and the BBC Sport website from 14:00 BST

The more time goes by, the tougher this year’s world championship looks for Lewis Hamilton and Mercedes.

The Styrian Grand Prix weekend is a long way from over yet – there is still a race to run and it might even be a wet one, judging by the weather forecasts.

But Red Bull’s Max Verstappen has so far looked imperious. Not only that, but the statistics are mounting up in the Dutchman’s favour.

Verstappen, 12 points ahead of Hamilton after his victory in France last Sunday, has looked the form man all weekend, and took pole by 0.194secs around one of the shortest tracks on the calendar.

It was his third pole of the year, one more than Hamilton and Ferrari’s Charles Leclerc. One of Hamilton’s poles would have been Verstappen’s had he not made a mistake on his final lap at the Emilia Romagna Grand Prix. And so for the same reason should the single one claimed by Hamilton’s team-mate Valtteri Bottas.

Hamilton has been saying all season that Red Bull have the faster car and the evidence is mounting up, even if there is almost nothing to choose between them in races, many of which have been decided on the finest of margins.

It remains to be seen whether that happens again on Sunday. Verstappen said he expected a close race. Hamilton felt the Red Bull had 0.25secs a lap on the Mercedes in race trim in Friday practice, according to his team’s analysis, and hoped set-up changes since then had brought them closer together.

On Saturday, though, this was Red Bull’s biggest performance margin over Mercedes in percentage terms since the season-opening race in Bahrain.

“It was a difficult session,” said Hamilton, who was also slower than Bottas, but regains a place on the front row following the Finn’s three-place grid penalty for spinning in the pit lane on Friday.

“I have had a really good weekend so far. Of course not as quick as Max but I did a lot of work before the event and the car was feeling great all day on Friday.

“We have just been chipping away at it. And then in qualifying, the car just didn’t feel as great as in final practice. I don’t fully understand it.

“I wasn’t that quick in qualifying but I am really happy to be where we are. The next 0.2secs is a little bit difficult. They have had [strong] straight-line speed again here this weekend, which is hard for us to compete with.” 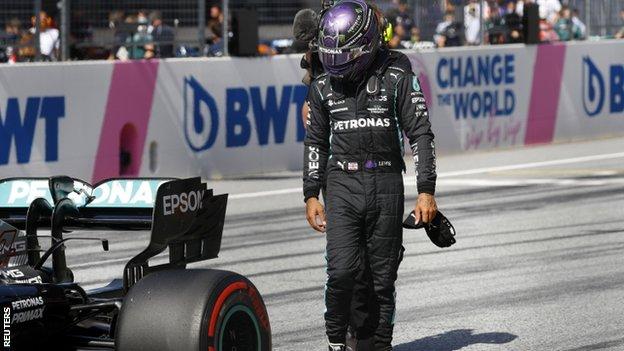 Hamilton is 12 points behind Verstappen in the drivers’ championship

This was the latest in a series of references by Hamilton to Red Bull’s straight-line speed over the past two weekends.

The performance pattern between the two cars in Austria has been similar to the way it was in France last weekend – little to choose between them in cornering speed and the Red Bull quicker on the straights.

This, after Red Bull’s partner Honda introduced the second of its three permitted power units this season at Paul Ricard. Mercedes had introduced theirs a race earlier in Baku.

The Red Bull’s straight-line speed advantage since then has raised eyebrows at Mercedes because engine development is not allowed mid-season in 2021. Manufacturers can introduce only minor reliability improvements.

Inevitably, then, Hamilton’s remarks have piqued interest and Red Bull have been asked questions about their advantage on the straights.

Mercedes F1 boss Toto Wolff said after qualifying: “I wonder why that is such a topic when we all know the power units need to be homologated and I am really surprised that the Red Bull guys keep protesting so loudly on the power unit story. That is a bit weird.

Honda says that there is no performance difference between the two engines, only what it calls a minor update for reliability. The Japanese company says it believes Red Bull’s current performance level comes from improvements in management of electrical energy in the hybrid engine and car upgrades.

Verstappen is also unimpressed by the engine-related questions being directed at Red Bull.

“I get these questions now for two or three weeks,” he said. “That we are really quick on the straight – and yes we are. But look at our rear wing. I don’t think it’s exactly the same [as Mercedes].

“For sure Honda did a great job compared to last year, but from our first engine to the one we have in the car now it is all about reliability improvements and no clear advantage on pure power. Next time, I am going to bring a print-out of the rear wing we’re running and then hand it over to every single journalist.”

So why are Red Bull so fast?

Verstappen’s answer hit on what appears to be the core of the issue – Red Bull’s aerodynamics.

Being able to run a smaller rear wing for extra speed on the straights, but still be pretty much as fast as the Mercedes in the corners, suggests the Red Bull has greater aerodynamic efficiency. Less drag for a given level of downforce or more downforce for the same drag level, depending on how they set the car up.

In that case, assuming the engines are closely matched in performance – which they are this year after Honda’s major redesign over the winter – the result should be exactly what is playing out on the track right now.

Why does Red Bull now have this car performance advantage over Mercedes – after the world champions dominated last year?

That’s because rule changes introduced over the winter to slow the cars down have affected them to different degrees. Red Bull have clawed back more of the performance lost than Mercedes have.

The fact the modifications to the floor imposed by governing body, the FIA, have affected Mercedes and Aston Martin more than everyone else has been a theory since the start of the season.

They are the two teams running their cars with what is known as low rake, a shallower angle between the front of the car and the back. The others follow Red Bull’s high-rake philosophy.

And the longer the year goes on, the stronger the argument becomes that the teams running high-rake cars have found it easier to claw back lost performance than those using low rake.

Track the performance loss from 2020 to 2021 and only Haas have fallen back more on average over the races so far than Mercedes and Aston Martin, whereas Red Bull are fourth best in that metric.

“We know how the technical directives have evolved for 2021,” Wolff added. “We have been on the receiving end. Fact.

“We continue to stick to our principle of putting our resource into 2022, with all the consequences that can happen in 2021. But this is a long game. We are not looking at a single race or a single result, but trying to optimise every year.

“Having said that, we just need to do the best of our package. It’s not a secret. There is a trend. They have the faster package at the moment and we need to utilise our tools and our intelligence and our car set-up work, the tyres. We need to be faultless and I believe if we can align those stars, we can win the championship.

“And whatever the pole position or victories that anybody has at this stage, we have just been through one-third of the championship. There is a long way to go.

“It is completely open, but from a pure performance standpoint their package is simply quicker at the moment.”

Bottas did what he needed to do after his error on Friday and put his car as high up the grid as he could, limiting the damage incurred by his grid penalty and beating the second Red Bull of Sergio Perez into the bargain.

Still, it was hard to escape the feeling that the Finn’s spin in the pit lane came at about as bad a time as it could have.

Wolff is actively pondering whether to keep Bottas for next season or promote George Russell, so to make an unprecedented error like that was bad timing to say the least.

Not long before Bottas made the mistake, Wolff had been talking about the choice ahead of him.

“Valtteri had some really good weekends, but he also had some off weekends and we just need to minimise those and then we will take a decision,” said Wolff, making reference to Bottas’ weak races at Imola, Portimao and Baku.

Bottas gets on well with Hamilton, who has been expressing this weekend his belief that there is no need to change the Mercedes line-up, and they form a harmonious line-up – an appealing prospect for Wolff after the poison of Hamilton’s years alongside Nico Rosberg.

Russell, meanwhile, had one of his most impressive races last weekend, finishing 12th at Paul Ricard, ahead of a Ferrari, an Alpha Tauri, an Alpine and both Alfa Romeos in what is statistically the second slowest car on the grid.

And on Saturday he produced another outstanding qualifying performance, 11th fastest, and missing out on a place in the top 10 shoot-out by only 0.008secs.

The 23-year-old Briton is pressing his case hard. Will Wolff go for stability in the now, or potential for the future? The time for a decision is approaching fast.