This Saturday, January 23, a strong earthquake was recorded that was felt in the center of the country. As reported by the Colombian Geological Service, the magnitude 5.1 earthquake it originated in the municipality of Baraya, department of Huila. 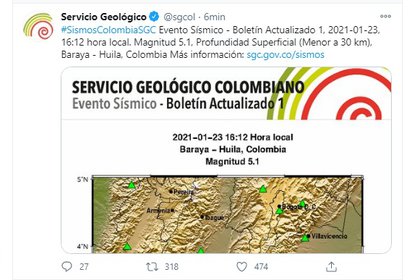 Users on social networks said that Bogotá, Meta and Huila the tremor was felt quite strongly. Some uploaded videos to Twitter.

Recommendations for an earthquake

– Panic attitude and sudden movements should be avoided, as this generates a chain reaction, which can result in collective panic.

– At the time of an earthquake, individual protection must be sought along with an element that is resistant: table, door frames, columns in earthquake-resistant buildings, to prevent falls from roofs or light objects.

– When the shaking stops, the respective evacuation of the building must be carried out to a clear point, since after an earthquake there can be aftershocks and these tend to worsen any remaining damage.

What should an emergency kit have in case of an earthquake?

Colombia is one of the 30 countries that are located on the Pacific Ring of Fire, a point where several tectonic plates converge.

According to the District Institute for Risk Management and Climate Change (Idiger), the kit must be reviewed at least once a year and it is necessary to update it according to the needs of the household members.

Below is the list of items that should go in the emergency kit:

First aid kit and reserve of your essential medications.

Complete change of clothes (for each member of the family).

Likewise, he stressed that earthquakes cannot be predicted and for the same reason the information issued before the events should be ignored.

Wave of rejection on Twitter of a young woman who hopes to check the ‘karma’ with Minister Carlos Holmes Trujillo, hospitalized for covid-19

“The soul of your friend is no longer here”: disturbing testimonies about the whereabouts of Julián Beltrán, the young Colombian disappeared in Spain

They capture the alleged person responsible for the death of Ana María Castro, the young woman who would have been thrown from a vehicle: reconstruction of the fateful night