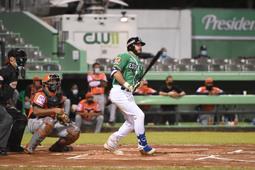 This Tuesday night’s game between the Toros del Este and the Estrellas was stopped by rain at the end of the eighth inning when the Orientales won 3 runs by 1.

The meeting that took place in Tetelo Vargas Park, corresponding to the Don José Manuel Fernández autumn winter baseball tournament, in memorian, BHD Cup, León will be resumed at the visit of the Bulls to the Tetelo Vargas Stadium on December 7.

The ball game suffered three interruptions. The first lasted 57 minutes when part of the lights in the two towers on the left side went out, and another because of the rain and that lasted one hour and 32 minutes in the sixth inning.

At the end of the eighth, with one out, the referees decided to stop the game for the third time when the home team batted.

The conditions of the terrain were not in minutes to end the game due to the heavy rains that fell during the day and at night.

After a prolonged break in the game due to the rain, Anthony Gose came in to pitch in place of Cristopher Sánchez, finding the bases loaded. Zach Reks hit a triple to clear the bases and put the Stars ahead 3-1.

The Bulls attacked pitcher Nestor Cortés when they made their only run at the top of a long fourth inning lengthened by a power failure in one of the towers of Tetelo Vargas Park.

Jordany Valdespin led off the inning with a double to right field, but Peter O’Brien was struck out and Yamaico Navarro was dominated with a ground ball to deliver the first two outs of the inning. With Navarro’s shot, Valdespín moved to third. It was then that the simple tug of the team captain Cristhian Adames came for Valdespín to score from the anteroom, it was then that the blackout occurred in one of the towers. Bulls 1, Stars 0.