Arguably, Doctor Octopus’ greatest achievement has been taking over Peter Parker’s mind. In Superior Spider-Man, Otto Octavius ​​nullified Peter’s brain waves and put his own spin on the life of the web thrower. However, this was not the first time that Doctor Octopus had taken advantage of Spider-Man’s mind.

This first case of mind control took place in the Amazing Spider-Man # 53 of 1967, by Stan Lee and John Romita Sr., and Peter Parker had to deal with its immediate side effects until the Amazing Spider-Man # 58 of 1968, by Lee and Romita, in one of the earliest extended epics of the wall-crawler. While attending a scientific exhibition with Gwen Stacy, Peter was unlucky enough to run into Doctor Octopus. Octavius ​​was trying to steal a nullifier, a device that could protect him from missiles. Spider-Man arrived to stop his enemy, preventing Octavius ​​from stealing the Nullifier.

Although Doctor Octopus escaped, Peter placed a spider tracker on the villain. However, Octavius ​​saw the tracker and set a trap for Spiderman. When the wall-crawler reached Octavius’s headquarters, the place exploded. Meanwhile, Doctor Octopus reestablished his new headquarters in an unexpected place: Aunt May’s house in Forest Hills. 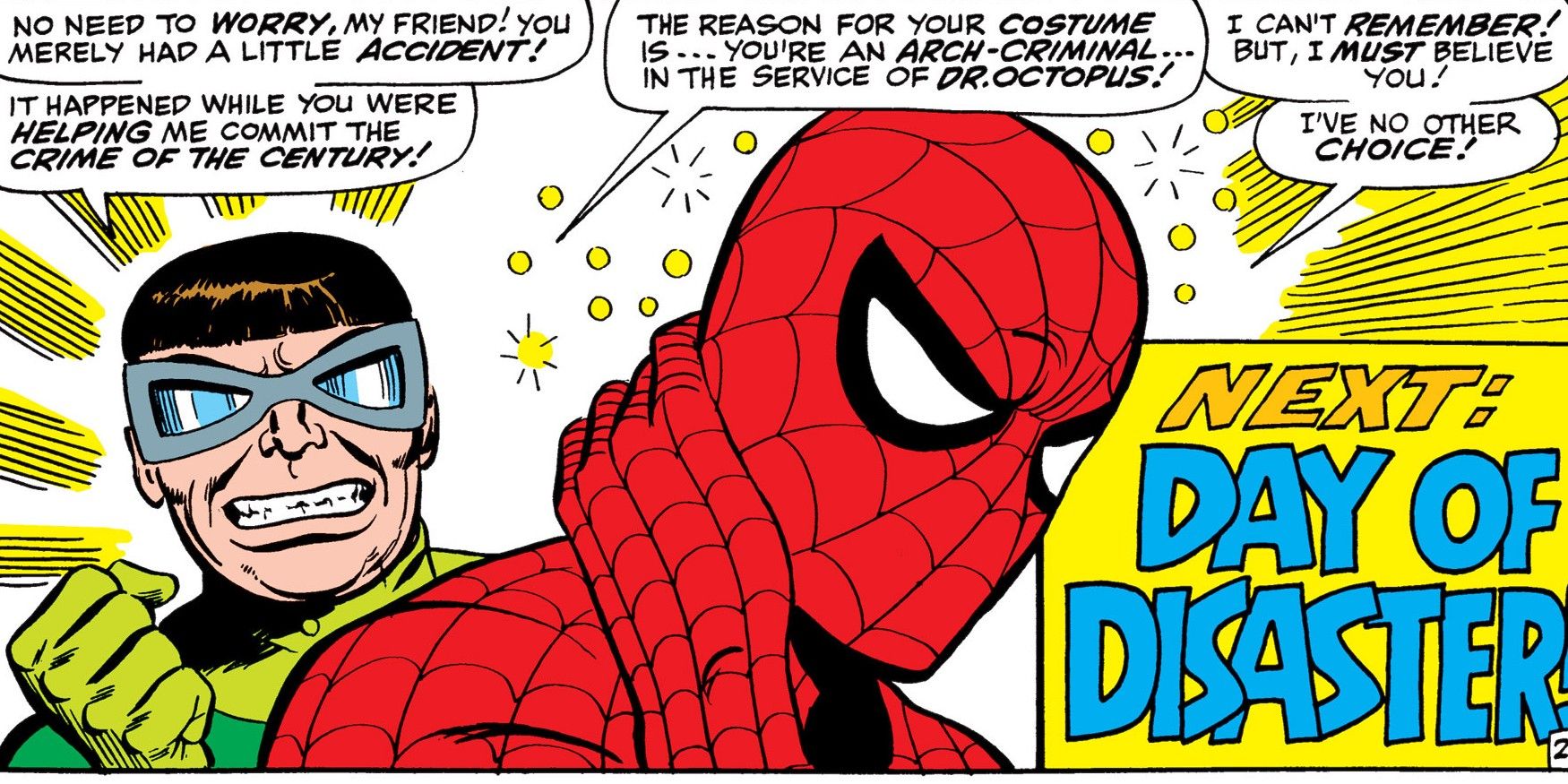 Spiderman searched everywhere for Octavius ​​before coming home to find his arch nemesis having tea with Aunt May. Out of fear for May’s health, Peter knew he couldn’t face Octavius ​​there. During a scuffle with Doctor Octopus’ henchmen, Peter lured May out of the house. With Octavius ​​alone, Spider-Man entered the house to finish him off.

Unfortunately, just as Peter was about to defeat Doctor Octopus, May arrived. The sight of these two men in disguise in battle caused May to go into shock, allowing Octavius ​​to escape. May recovered, but Peter vowed revenge on Doctor Octopus. Spider-Man hunted down Octavius, while Doctor Octopus stole the override from a military convoy.

Doctor Octopus turned the Nullifier into a weapon capable of disabling any mechanical device, which he used to attack Stark Industries. The web head appeared to confront Octavius ​​and engaged him in heated battle. Finally, Doctor Octopus prevailed and struck Peter with the nullifier. As a result, the memories of Spider-Man were erased from his mind.

Taking advantage of this amnesiac web-slinger, Octavius ​​convinced Spider-Man that they were partners in crime. Peter accompanied Doctor Octopus back to his headquarters, although he was still unsure of their association. In fact, when Octavius ​​told Spider-Man to unmask for him, he refused, thanks to Spider-Man’s arachnid sense. 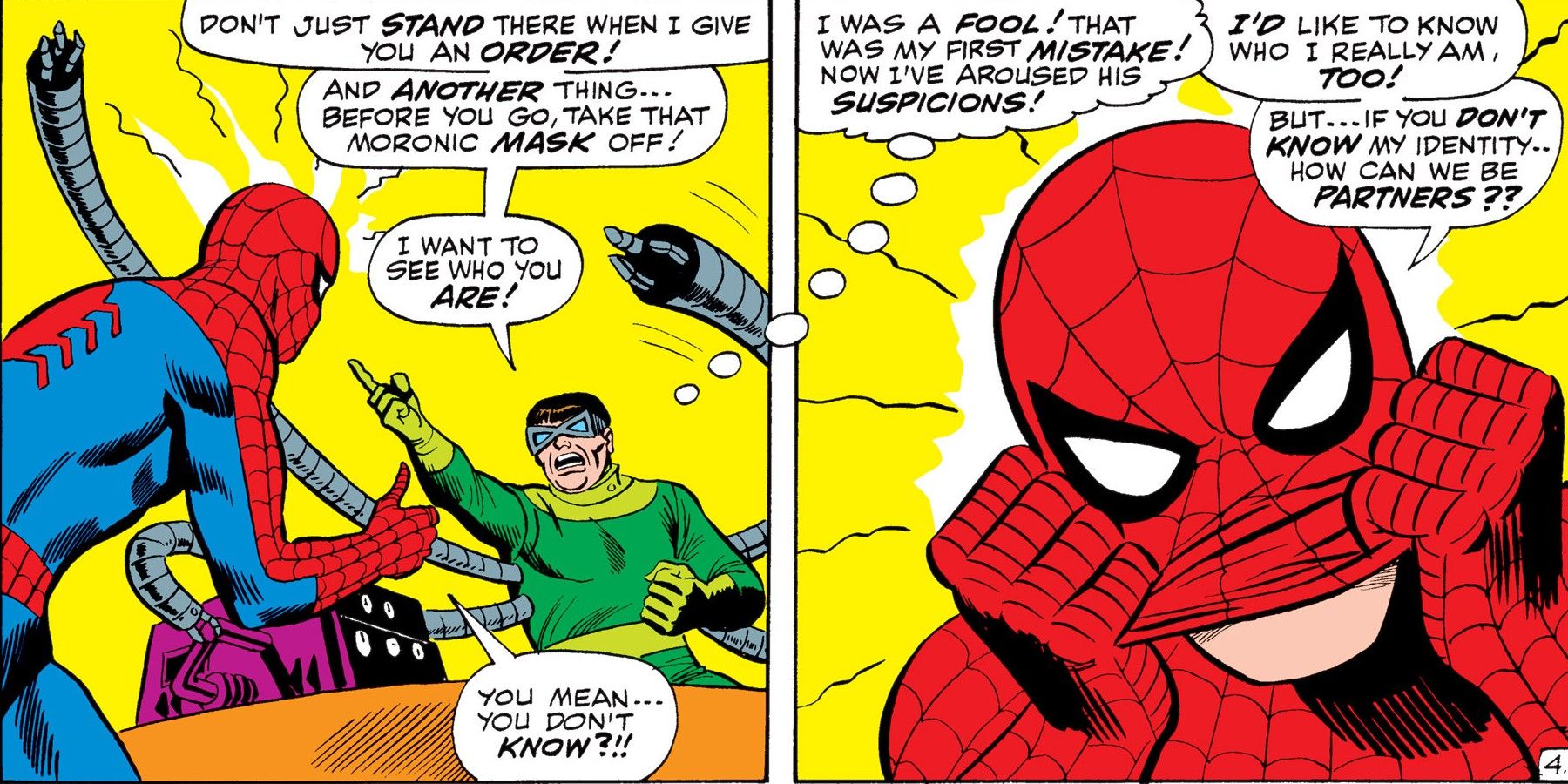 Still, Spiderman went to steal the rare Isotope-16 when asked by Octavius, breaking into a secure military facility. However, upon returning to Octavius’s headquarters, Spiderman turned on his new partner. Even without his memories, Peter knew that Octavius ​​was a villain, and the two fought once more. The military, including Colonel John Jameson, followed the wall-crawler and intervened in the battle. After Octavius ​​was defeated, Jameson decided to trust Spiderman’s innocence and let him go.

While Octavius ​​was defeated, Peter still did not know who he was. To make matters worse, everyone thought Spider-Man was a criminal. When Harry Osborn found a spider tracker in Peter’s closet, he believed that Spider-Man had kidnapped it. J. Jonah Jameson then hired Ka-Zar to defeat Spider-Man in battle. Meanwhile, Peter toured the city, asking everyone from Captain Stacy to J. Jonah Jameson to help him find out who he was. However, before he could get any real answers, Ka-Zar attacked.

The two fought all over New York City before landing in Central Park. There, Spiderman plunged into a body of water and was about to drown. Fortunately, Ka-Zar saved his opponent. When Peter woke up, it was discovered that the impact of the water had restored his memories, returning Spiderman to his former self. After a long battle with Doctor Octopus, Peter Parker finally regained his lost memories.

While it may not be the most famous story in Spider-Man history, it has the distinction of being one of Marvel’s first multi-issue stories. Additionally, it set a precedent that Superior Spider-Man picked up on and explored in much greater depth over an even longer period of time, cementing this story’s place in the holy halls of Marvel history.