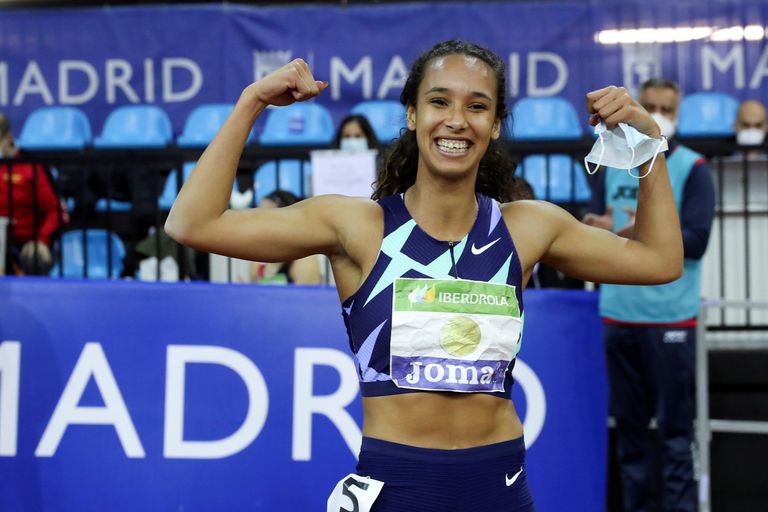 Like a golf player who, after a bad shot, does not linger over the resulting bogey but goes for a birdie on the next hole, so María Vicente broke her Spanish record and, with 4,501 points, left her place practically safe in the next Indoor European Championship in Torun (Poland, March 5-7), his second participation when he is not yet 20 years old.

Birdie in hurdles (8.25s, his personal best), bogey in height (1.75m, three centimeters shorter than his mark and six below what he expected), bogey in weight (12.25m, 17 centimeters less than his mark in the previous record and 80 lower than his best mark, and almost a meter less than the mark he had in his head), birdie in length (6.49m, 13 centimeters longer than when, with 4.4411 points, he beat the record for the first time, two years ago in Antequera, at 17) and final birdie in the 800m, 2m 19.51, the best mark ever by an athlete who is on the way to getting all the good things that since she was a youth (world champion heptathlon at 16, triple European champion at 17) and junior (European heptathlon champion at 18) announced.

“I am very happy because I have once again demonstrated what I am capable of, but wanting more,” says the record holder. “I could have done better in some test. I have been able to rebuild myself. And to move on. I expected more from myself, but having high expectations has weighed down on my weight and height attempts. “

“She has a lot of potential and a lot ahead of her to improve”, says her coach since last summer, when the athlete turned her life around, left her L’Hospitalet and went to San Sebastián to live (in a higher school) now train with hurdler Teresa Errandonea with whom he began another stage of his life after decades dedicated to being technical director of the Spanish federation, passing through Deusto to study ADE and languages. “He has a long journey, a very good head and a highly developed motor capacity, which allows him to catch technical gestures right away.”

This is how the day was spent on the crowded Gallur track – dozens of athletes, technicians, judges, cameras, volunteers, despite the strict sanitary protocols that were followed: you cannot do athletics with less – in front of bleachers without an audience and a team television exclusively for her, which pursues her from test to test of the pentathlon, from the hurdles track to the high jump, to the weight, to the length and the four laps of the ring for the final 800 meters. And always in the nearest tier, Cid, giving him the technical and psychological guidelines, and suffering and sighing in relief, alternately and in unison with his pupil, his Maritxu, as he says, and Maritxu, when after the celebration and the photos he abandons finally the clue, he only knows how to say, “And Ramón? Where is Ramón?”.

The 4,501 points are the sixth best European brand of the year. The 12 best have a place in Torun. This weekend there are championships in other countries where other athletes could overcome it, although specialists assure that it is practically impossible for it to be left out of its second European indoor. Before, this Saturday and Sunday, he will compete in the long jump and 60m hurdles, where he will be able to get more medals.