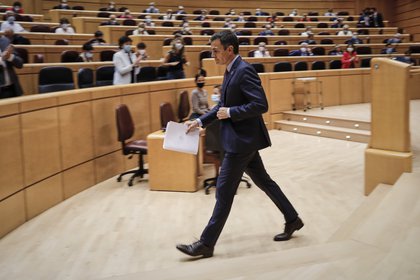 09/08/2020 The President of the Government, Pedro Sánchez, appears before the Plenary of the Senate, after the summer break, in Madrid (Spain), on September 8, 2020. Sánchez appears at his own request in the Upper House to explain the General lines of action of the Government in two general lines: the management of the coronavirus pandemic and its commitment to approve next year’s budgets. POLITICS Jesús Hellín – Europa Press

The President of the Government, Pedro Sánchez, assured this Tuesday that, with the Minimum Vital Income (IMV), the Executive has “set up”, in “record time” and “in a pandemic” a “new Welfare State.

During his speech in the Plenary of the Senate, the Chief Executive acknowledged that the Government must improve in the management of this benefit, but has also requested recognition for his team which, as he pointed out, has implemented measures “in record time “.

In the case of the IMV, he explained, it is a question of aid from which “800,000 Spaniards are already benefiting.”

The president of the Government has thus responded to a parliamentary question made by the senator of Esquerra Republicana (ERC), Mirella Cortés, in which he demanded a greater effort from an Executive that has called itself “the most progressive in history.”