It could not be and Spain has fallen this Saturday in an even match against Russia by 74-78 And he will not be in next year’s World Cup where he should have fought for a place in the 2022 World Cup.

Match to elucidate the positions of the 5th to 8th place of the women’s basketball Eurobasket and also direct eliminatory for the qualification for the World Cup played before about 1,000 spectators at the Fuente de San Luis Pavilion (Valencia).

Too many problems like the resignations of Laura Nicholls and Anna Cruz, the positives of Covid-19 that left Alba Torrens and Tamara Abalde out of action or the absence due to physical issues of María Araújo.

At the start, the still champions had a double challenge: stop the great Maria Vadeeva (19.4 average points and 23 valuation points) and put the problem of attacking a Russian team that only France and Serbia have scored in terms of points.

And those of Lucas Mondelo met both premises almost completely. The winner of the Euroleague with the UMMC Yekaterinburg went to rest with only four points and Russia was not comfortable in offensive tasks and had only 21 points in the first 18 minutes … but scored nine in the last two.

With an excellent defense and with eight points from an unstoppable Astou Ndour, Spain took three points of income in the middle of the first act (10-7) and closed the first 10 minutes with a basket against and on the horn of Silvia Domínguez (17-12). 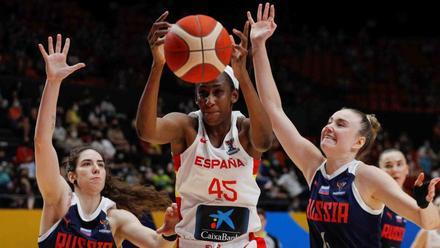 The Spanish youth continue to assert themselves and Maite Cazorla spurred the hosts further (25-17, six minutes before intermission), while the spectacular emergence of Raquel Carrera increased the rent to 10 points (31-21 at 2:50 from intermission). And it could have been greater if it were not for a triple missed by Silvia Domínguez and a shot of two by Carrera that did not enter for a Spain that was left out of the medals when falling in the quarterfinals against Serbia.

However, with Vadeeva’s second basket and a triple from Kurilchuk, Russia closed the second quarter with a 0-7 partial to get closer to just three points (33-30) and re-enter the game with force.

Spain only needed to see a hoop from the perimeter (0/9 in triples) and this together with the sensational encounter of Raisa Musina (15 points already) allowed the Russians set the tables at 4:24 from the end of the third quarter (39-39). 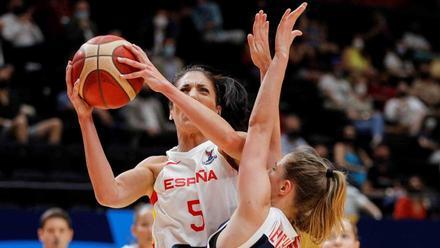 Cristina Ouviña woke up in the last room

The last three minutes of the third quarter were spectacular. Finally Leonor Rodríguez broke the Spanish bad streak with two triples in a row to which she responded immediately and in the same way Nina Glonti to leave the ex-Soviets in command in the absence of the last quarter (47-49). Another key to the Russian recovery was the improvement in the rebound (22-30 when this statistic had been equal until the break).

Y When it was most necessary, Cristina Ouviña finally appeared, who had 0/5 in field goals and scored five points in a row to put Spain ahead again (54-53 with 6:48 left). However, a three-pointer from Shilova and a transitional basket from Vadeeva turned the score around and forced coach Lucas Mondelo to stop the match (59-62 with 3:44 left).

Astou Ndour rescued Spain with five straight points including a great triple, but Glonti scored for the third time from beyond 6.75 meters and a sensational basket by Vadeeva left the champions almost KO (64-69 at 1:05 left). The team never lowered its arms, but Levchenko’s safety with six free throws scored without failure prevented the comeback for the final 74-78.