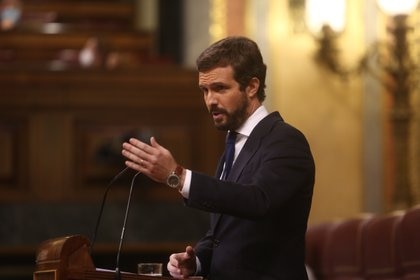 11/11/2020 The leader of the PP, Pablo Casado, during his speech in the full Debate of the entire State Budget Bill for the year 2021, in the 2020 Congress of Deputies. The Coalition Government From today, it faces the first parliamentary examination of its PGE 2021 project, and it does so with the tranquility of a larger majority than that of the inauguration of the Prime Minister. Of course, this time it is only a matter of processing the accounts and keeping the negotiation path open, and the final phase, where they will have to be approved, will be at the end of the month. POLITICA EUROPA PRESS / R.Rubio.POOL – Europa Press

The leader of the PP, Pablo Casado, on Monday accused the chief executive, Pedro Sánchez of “obscuring” the “sacrifice” of the ETA victims with the “moral indignity” of agreeing with Bildu on the General State Budgets (PGE) . In addition, he has said that his party will not allow “for the memory” of those victims to cross the line of “moral dignity” that, in his opinion, the Government has crossed with the national team.

Casado, who has participated in the Board of Directors of NNGG, has harshly criticized the statements of the Minister of Development and number two of the PSOE, José Luis Ábalos, assuring that Bildu has had “more sense of responsibility” than the PP in the PGE. In an interview in El País, the minister said that there is “no pact” with the nationalist coalition, an extreme that he stressed again this Monday at a press conference after the PSOE Executive.

After recalling that his interest in politics began with Miguel Ángel Blanco, assassinated by ETA, Casado has condemned that a party like the PSOE, which “has 12 victims of terrorism” in its ranks, considers a leap for democracy “to agree with those who they have not condemned the murder of their own companions. “

“For this reason, there are already many regional presidents of the PSOE and many former leaders of the Socialist Party who have said that this does not have a pass,” he said, referring to Guillermo Fernández-Vara, Emiliano García-Page, Javier Lambán or Alfonso Guerra .

“WE CANNOT TOLERATE IT”

At this point, he has blamed Ábalos that the sister of Miguel Ángel Blanco, the children of Manuel Jiménez Abad, the sister of Alberto Jiménez-Becerril and other victims of the PP have to hear that the PP is “less responsible” than the party “for which his relatives died, according to number two of the PSOE.”

“In other words, the party of those who toasted with champagne when they put two shots at a man in front of his son is more responsible than the party for which he had been murdered? We cannot tolerate that,” he proclaimed.

In this sense, the president of the ‘popular’ has alluded to “the memory” of the victims of terrorism and has stressed that this is a “line of moral indignity” that the PP “is not going to allow to be transferred.”

Casado has acknowledged to New Generations that they have recently learned that there are many young Spaniards who do not know who Miguel Ángel Blanco or Gregorio Ordóñez was. “That is a sick society. A society that does not claim its heroes is a society that does not make sense and is not worth it,” he emphasized.

At this point, he stressed to the youth of the PP the importance of defending in Spain “the memory, dignity and justice of the 850 martyrs of freedom.” “Our main reason for being, the NNGG and the PP, is to bring that witness of people like Miguel Ángel Blanco, who died to defend the freedoms that we are now also claiming,” he stressed.

Casado has insisted that the PP will not allow the PSOE to continue with this line of action. “We are not going to let them pass by. Not for PGEs, or for an investiture or for a labor reform. There is no right because there has been too much pain in this country for some to come to obscure that brilliant story of sacrifice,” he said. affirmed.

Thus, he has warned Pedro Sánchez that the relatives of the victims are not asking for “revenge or rancor” but rather that their loved ones were murdered “now it is not tarnished by a short-termism as irresponsible as that of the Government.”