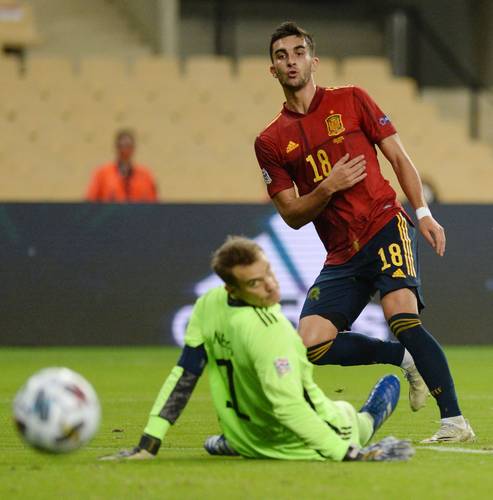 ▲ The Spanish Ferran Torres had an outstanding performance by scoring a treble.Foto Afp

Paris. Spain qualified for the Nations League Final Four in spectacular fashion by crushing Germany 6-0, while France, who had already secured the ticket on Saturday, finished the group stage undefeated.

In Seville, two former world champions, Spain and Germany, played it all in a direct duel, in which a draw was enough for the Germans to qualify for the Final Four, which will take place in October 2021.

Germany suffered their heaviest defeat in 89 years, since losing the same result to Austria in a friendly in 1931.

La Roja recovered his punch when he needed it most, in a match in which it was only worth winning. But the bad news was the injury of Sergio Ramos. The captain of the national team retired at minute 41 with a sore right leg and was replaced by Eric García, while Sergio Canales came out at 10, a sore left thigh.

The game between Switzerland and Ukraine, enrolled in the same squad as Germans and Spaniards, was not contested due to several positive cases by Covid-19 among Ukrainians.

In the other sector of League A that was played yesterday, which already had the lead decided since last weekend for France, the Bleus finished undefeated after defeating Sweden 4-2.

The Scandinavians took the lead with a goal from Viktor Claesson (4), but the Gauls came back with a double from Olivier Giroud (16 and 59) and the same from Benjamin Pavard (36). Robin Quaison cut differences for the Swedes to 88, but Kingsley Coman scored the final 4-2 in discount.

Croatia, struggling not to finish last in Group A3, lost 3-2 to Portugal, nevertheless escaping relegation to League B thanks to the defeat of the Swedes in Paris.

Mateo Kovacic advanced (29), but the Portuguese came back with goals from Ruben Dias (52) and João Félix (60) and the former Real Madrid midfielder, now at Chelsea, made it 2-2 and again Dias, in the final stretch, he made the final 3-2. Cristiano Ronaldo started, but chained a second game without scoring.

On Wednesday the other two groups will be resolved, with Italy and Belgium with an advantage to accompany Spain and France in the Final Four. The boot team visits Bosnia, with the Netherlands and Poland waiting for a Azzurro stumble to have qualifying options, and Belgium host Denmark. The Danes, two points behind the Belgians, will qualify if they win in Leuven.